This class is make it or break it for Whalen. They need to produce immediately.

Niamya HollowayForward - HIGH SCHOOL A ranked prospect, the No. 90 player overall in the country and No. 5 player in the state of Minnesota according to ...

HIGH SCHOOL
A ranked prospect, the No. 90 player overall in the country and No. 5 player in the state of Minnesota according to Jr. All Star Rankings... Averaged 13.8 points, 7.2 rebounds, 2.7 steals per game while shooting 58.4 percent from the floor and 84.4 percent from the free throw line... Helped Eden Prairie High School to a 2AAAA section championship in 2020 and was a three-time All-Conference honoree along with an All-State Honorable Mention nod... Earned an academic All-State honor along with an MSHSL ExCel Award... In AAU ball, with North Tartan, averaged 12.2 points, 11 rebounds, 2.7 assists, 1.8 blocks and 1.8 steals per game... With her AAU team earned a EYBL Second Team nod while also being named the Defensive Player of the Year by Prep Girls Hoops... With North Tartan won the Minnesota State Championship...Was a multi-sport athlete, earning four letters in basketball while also earning three in track and field... Was a captain for the track team while also earning All-Conference laurels three times along with two team MVP honors, rookie of the year and winning the high jump state championship... Holds the 200m school record and was All-State in the high jump, 200m and the 4x200m relay... Chose Minnesota over Marquette, Northwestern, South Dakota and Howard.

WHY HOLLOWAY CHOSE MINNESOTA:
There are many reasons I chose University of Minnesota, but the main factor was because it felt like home. I have a great relationship with the amazing coaching staff, and they have made me feel so special and welcome. I am also incredibly close with my family, and I don’t know if I would be able to play somewhere where they don’t have the opportunity to watch every game in person. Lastly, I chose the U because I want to be a part of something special! With my recruiting class coming in I believe we can make a huge difference and play a role in the great program that those before us have built!

Mallory HeyerForward - HIGH SCHOOL A four-star recruit, the No. 55 player overall in the country and the No. 11 forward according to ESPN ... Averaged 19...

HIGH SCHOOL
A four-star recruit, the No. 55 player overall in the country and the No. 11 forward according to ESPN ... Averaged 17.3 points, 9.2 rebounds, 1.4 blocks and 1.2 steals per game in high school while shooting 57 percent from the floor and 30 percent from three... Has scored 1,764 points for Chaska High School in 102 varsity games from 2018-Present... A two-sport athlete, playing volleyball and basketball.. Earned three All-Metro honors in volleyball, reached 1,000 kills, was a two-time captain and was a six-time letter winner throughout her high school career ... Led her volleyball team to a 2AAAA Section runner-up finish in 2019... Three-time All-State selection by the MGBCA... Four-time Metro West All-Conference... Two-time Metro West Conference Player of the Year... Was the 2020-21 Max Preps Minnesota Player of the Year... Reached 1,000 points scored in 2019... Was a team captain for 2020-21 season... Two-time Star Tribune All Metro honoree, once on the first team and once on the second team... Won a Class AAAA State championship in 2020-21... 2019-20 Section runner-up in basketball... Was on the Dean's List from 2018-21 and was an academic letter winner in 2020-22... A member of the National Honor Society from 2020-22... Played with the Minnesota Fury 2022 UAA in Chanhassen Minn... Won the 2020 Minnesota State Championship with the Minnesota Fury and finished runner-up at the UAA 2021 Nationals... Chose Minnesota over Iowa State, Utah, Iowa and Wisconsin.

PERSONAL
Child of Sarah and Rigg Heyer... Has two siblings in Aubrey and Natalie... Intends to major in Sports Medicine... Non-basketball interests include volleyball, shopping and listening to music... Parents both played sports at St. Cloud State with her mother playing volleyball and her dad playing football.

Mara BraunGuard - HIGH SCHOOL A four-star recruit, the No. 28 player overall in the country and the No. 8 point guard according to ESPN ... Averaged 20.5...

HIGH SCHOOL
A four-star recruit, the No. 28 player overall in the country and the No. 8 point guard according to ESPN ... Averaged 18.2 points, 5.5 rebounds, 4.6 assists and 3.5 steals per game in high school while shooting 43.6 percent from the floor and 40.7 percent from three... A two-time All-State selection as a sophomore and junior... A 1,000 point scorer for Wayzata High School... A two-sport athlete, making the state track and field meet in triple jump three different times... Played for North Tartan AAU, winning the State AAU MVP in 2021 and being named to the All-Tournament team at Nike Nationals in 2021... Won a State Championship with North Tartan AAU in 2021... A three-time Hill Murray Christmas Tournament champion and a three-time section championship runner-up... Three-time All-Lake Conference player along with All-Metro... Named to the 2022 Jersey Mike's Naismith High School Trophy Underclassmen Girls Watch List... Chose Minnesota over Arizona State, Iowa, Maryland, Michigan and Oregon State.

PERSONAL
Daughter of Chris and Ramona Braun who both went to Bemidji State... Mom played volleyball at Bemidji State while Dad played basketball... Has one sibling, Markus... Undecided on her intended major but has interest in psychology... Outside interests include volunteering at Club Unified and Special Olympics Minnesota.

WHY BRAUN CHOSE MINNESOTA:
"I've been a Gopher fan since I was little. It's important to me to stay home and continue to play in front of friends and family. I respect Coach Whalen and the entire coaching staff. I'm also excited to come in with the other commits in the 2022 class that I've played with and against for a couple of years."
Click to expand...

Amaya BattleGuard - HIGH SCHOOL A four-star recruit and ranked No. 39 overall, and the No. 10 point guard in the nation, according to ESPN/HoopGurlz Bask...

HIGH SCHOOL
A four-star recruit and ranked No. 39 overall, and the No. 11 point guard in the nation, according to ESPN/HoopGurlz Basketball... Won a state championship in 2019 with Hopkins High School and won section championships every year from 2017-21... Was named to the All-State team during her junior season and was All-Conference all four years at Hopkins... Was a team captain from freshman to senior seasons and earned a total of five varsity letters... Averaged 14 points, 7 rebounds, 6 assists and 3 steals per game in her latest high school season (junior season)... Shot 46 percent from the floor, 39.5 percent from beyond the arc and 73 percent from the free throw line during her junior season... Played her AAU ball with North Tartan/MN & Metro Stars, MN... Earned First Team 3SSB Honors with her AAU club... Won the state AAU championship and national championship twice... Chose Minnesota over schoosl like Marquette, Florida and the University of Wisconsin.

WHY BATTLE CHOSE THE UNIVERSITY OF MINNESOTA
"Minnesota has a family environment with the team and the coaching staff which I really liked. Also, the fact that Nia, Mara and Mallory stayed here as well and that all four of us could really be a part of something special by turning the program. I also thought that us four committing to the U could start a trend of more top athletes staying home to play for the U. Lastly, academically the U fit my needs. I want to major in psychology and their psychology program is ranked top 10 in the nation."
Click to expand...

adamj95 said:
This class is make it or break it for Whalen. They need to produce immediately.
Click to expand...

Who of these four will start their first year?

Willwin40 said:
Who of these four will start their first year?
Click to expand...

I don't know about start but I would be willing to bet all four will play as True Freshman. They are all too talented and to needed keep on the bench. Wish we could have them play this year already.

Willwin40 said:
Who of these four will start their first year?
Click to expand...

They should all start.

This is the first I’ve seen about this potential 6’5” post for next year. Exciting if she ends up signing!

We would have a Fab 5. How long is the signing period?

Rickman55 said:
We would have a Fab 5. How long is the signing period?
Click to expand... 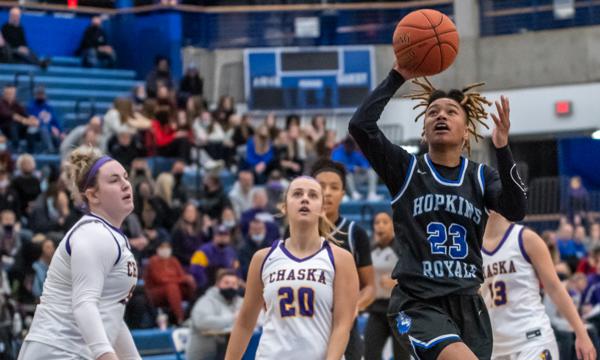 In the Chaska/Hopkins matchup: Amaya Battle finished with 11 points and Mallory Heyer 13.

When the dust settled on the first half, Hopkins (5-0) held a 36-15 lead while holding Hawk senior standout forward Mallory Heyer to zero points. The University of Minnesota commit had 17 points in her team’s 59-57 win against Shakopee earlier this week.

“She’s a worker,” Hopkins coach Tara Starks said of Heyer. “Our whole game plan was to get a body on her. Shot goes up, box her out. She’ll work herself into points.”

Heyer scored 13 points in the second half to complete a double-double effort as she finished with 11 rebounds.

In the Chaska/Hopkins matchup: Amaya Battle finished with 11 points and Mallory Heyer 13.
Click to expand...

Whew! I don't know enough about these but hope that Mara is able to come back strong from this.

Posterior collateral ligament will heal but it is soft tissue and will require a lot of rehab to strengthen that knee.

The way the team is playing, I wonder if some of these recruits are thinking about decommitting and finding a team that is competitive?