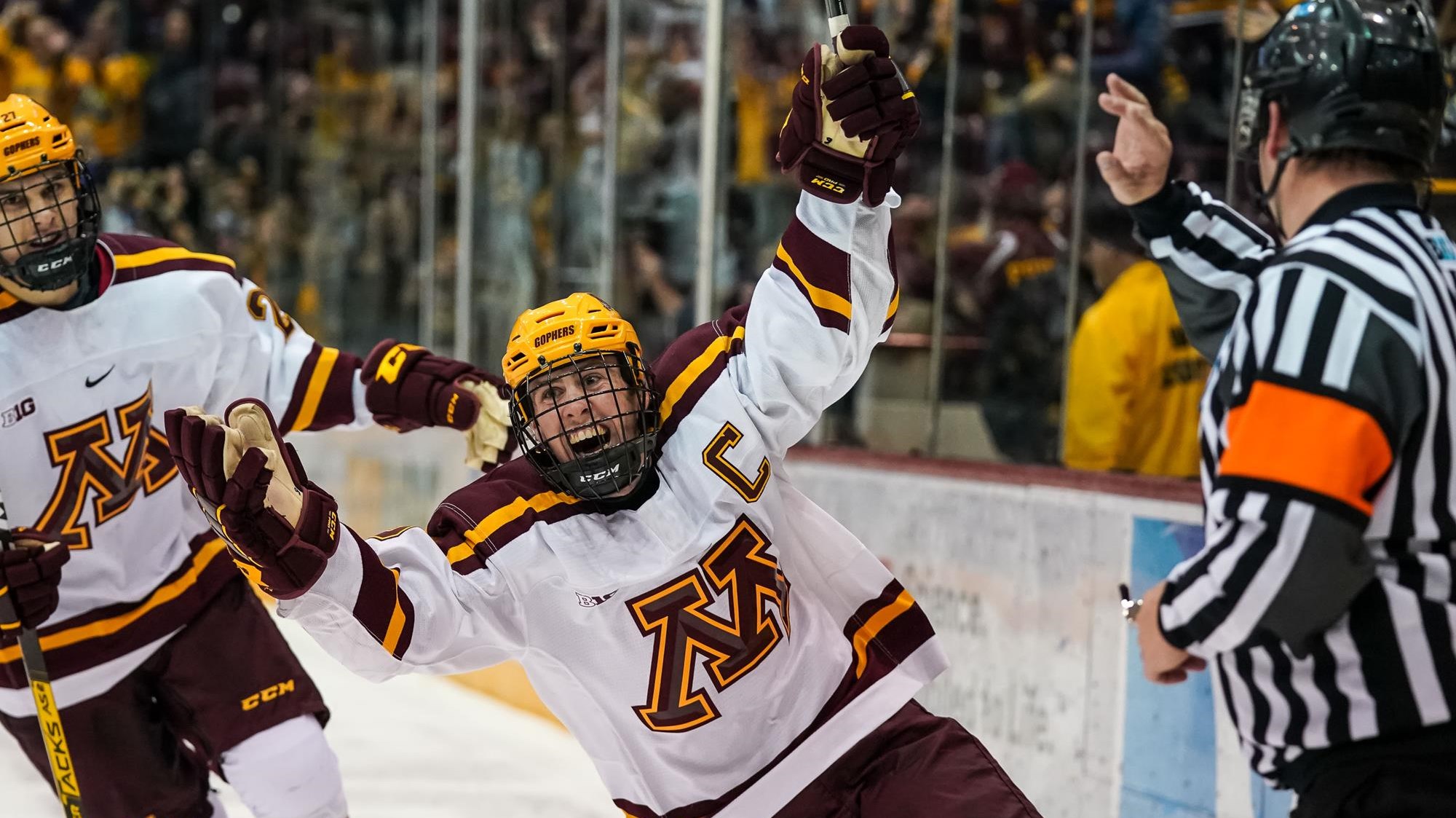 Gophers Split The Series On The Heels Of A Sammy Walker Overtime Winner - GopherHole.com

Follow Dylan on Twitter –> @DylanLoucks4 There were plenty of storylines coming into the home-and-home against the No. 2 ranked St. Cloud State Huskies. Whether it be the battle of the brothers with the Perbix’s and the Brodzinski’s or Bob Motzko’s return to St. Cloud, we were in for a treat...

There were plenty of storylines coming into the home-and-home against the No. 2 ranked St. Cloud State Huskies. Whether it be the battle of the brothers with the Perbix’s and the Brodzinski’s or Bob Motzko’s return to St. Cloud, we were in for a treat.
One thing is for certain, Motzko’s Gophers played a much better-structured game in both of the head-to-head matchups against the Huskies. Far better than last weekend against the Mercyhurst Lakers.
Despite dominating the play in the first period of game one, the Huskies took advantage of a crucial offensive zone turnover by Jackson LaCombe. The Anaheim Ducks’ prospect struggled in the first two games of the year against the Mercyhurst Lakers and unfortunately, it was the same for game three of the year.

Nobody is going to hide the fact Jackson LaCombe has struggled out the gate defensively this season, in the words of Gophers head coach Bob Motzko “he’s fighting it right now,” Motzko went on to say, “you’ve got to fight through it. We got another game tomorrow and we will continue to put him out there.”
The Eden Prairie native took the words of his coach to heart and answered. LaCombe didn’t show up on the score sheet for game 2 against the Huskies, but he recorded six shots on goal, carried a 1.23 xGF, and played a strong game in his end.

There were some positives to take out from the 2-1 loss against the Huskies in game one. Like the native of Grant Minnesota Chaz Lucius’ first-ever collegiate goal which tied the game at 1-1.

Sophomore defenseman and Los Angeles Kings’ prospect Brock Faber spoke to the media following Lucius’ first collegiate goal, “that’s a special moment for him, everyone remembers their first goal in college. Especially with that M on your chest. It’s special.”

Mason Salquist eventually nets the game-winning goal in the 3rd period of game one, of a loose puck that hit a couple of Gopher bodies along the way, before sneaking past Jack LaFontaine.

Gophers carried a 2-1 lead into the 3rd period but quickly saw it vanish as the Grand Rapids Minnesota native Jack Peart, scored 19 seconds into the last period. About a minute later, Gophers’ captain Sammy Walker scores his first of two off a great feed and play by Blake McLaughlin.

The top line for the Gophers has clicked out of the gate this year. The upper-classman line has recorded a combined total of 16 points in four hockey games. As a result, Minnesota has gotten off to a 3-1-0 start.

The Huskies were able to tie the game after a Ben Meyers cross-checking penalty late in the 3rd period. Nolan Walker, the native of Alaska, tied the game three apiece and forced overtime.

There were a couple of chances in overtime for both sides but nothing that would result in a goal. Until “the call” happened.

A horrible mistake by the officials eventually cost the Huskies the game. Blake McLaughlin was skating towards Nick Perbix, brother of Gophers’ Jack Perbix, behind the Huskies net. Blake grabbed onto the jersey of Perbix and hauled him down right in front of an official. McLaughlin knew he would get a penalty and ultimately let up on the play, as did Nick Perbix. After McLaughlin realized there was no call on the play he picked up the puck, circled the slot and found Sammy Walker who buried the overtime winner.

The Herb Brooks National hockey center completely exploded and rightfully so. After the dust settled and players began to shake hands after the game, head coach Bob Moztko went over to Los Angeles Kings’ prospect David Hrenak and gave him a tap on the shoulder. As a “don’t worry about it kid.” Hrenak has been one of the best college hockey goaltenders these last couple of years and shouldn’t hang his head over this one.

“I felt we deserved to win that game, and I know it’s going to be controversial how it played out. But we played the way we were supposed to tonight.” Coach Bob Motzko said to the media following “the call.”

This entire weekend was high-speed hockey, a treat for fans to watch. Especially in game two at the “Herb”, which was a complete back-and-forth game. A battle between these two Minnesota rivals and some of the top division one schools in the nation, shouldn’t have ended the way it did.

“I’m embarrassed by what happened and that non-call ruined a great hockey game,” Brett Larson, head coach of the St. Cloud Huskies said. “Unfortunately that situation left a tough taste in our mouths.”

This will not be forgotten for Huskies’ fans and players, and we can almost guarantee the Huskies will come out next time with some grit to them. The Gophers and Huskies won’t play each other again in the regular season. This means the battle of Interstate 94 will have to wait until the playoffs.

One of the more disgusting non-calls I've seen in a while.

#2Gopher said:
One of the more disgusting non-calls I've seen in a while.
Click to expand...

Bad calls happen. Our season ended a few years ago killing a penalty that nevers hould have been called in OT in the B1G tournament that was just as bad as this call. This was an out of conference game in October. Not fun, but it happens.

Saw on Gopher Puck Live website where the Gopher's were penalized for an extremely weak crosschecking penalty. Not sure why these calls happen or not happen for that matter.