4Ever, I will never ever suggest that you lack high expectations and standards for your beloved Gophers and their 18-22 year-old athletes.

I always try to remember that the Gophers’ opponents have million dollar programs and want to win too. Therefore, they are not trying to make it easy for us to spike the ball in their faces... they want to avoid that.

Yeah I've heard of him, in fact I knew him. Mike really was successful at recruiting in good in state talent but was unable to get highly rated players from across the country. Hugh has elevated the program from what Mike built, that is why he was given the reins at MN. I remember Carlson was a name thrown out as a replacement when Mike retired and I imagine he would have been unsuccessful at MN and let go by now like he was at Ohio St if that would have happened.

Hrothgar said:
Overrated/over-seeded. Very likely. What struck me was how slim their roster was all season. In the end out of 14, McGraw was injured; Myers mysteriously missing; Atherton, McMenimen, Huseman, seldom entered games, if ever; for whatever reason Miyabe got less & less playing time. That left only 8 viable choices. Yesterday it felt like Samedy, Pittman, & Rollins were taking on Pitt by themselves.
Click to expand...

I have no idea why Miyabe got so little playing time. She was quite effective in every one of the samples I saw throughout her career. Strange that she wasn't put in even when the rest of the team was struggling the other night. 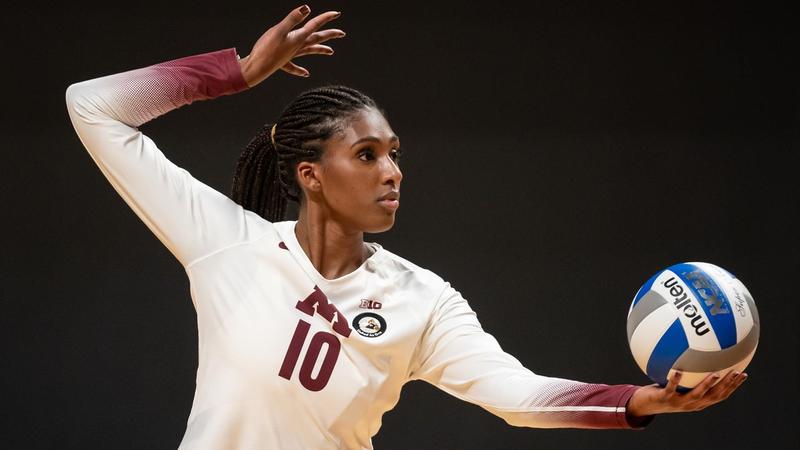 Samedy, a right-side from Clermont, Fla., is a four-time All-Big Ten selection and was named the 2021 Big Ten Player of the Year. Samedy was also named the recipient of the Senior CLASS award, which is chosen by a nationwide vote of Division I women's volleyball coaches, national volleyball media, and fans, is given annually to the most outstanding senior student-athlete in Division I women's volleyball. Samedy is the second student-athlete from the University of Minnesota to win the Senior CLASS Award. The AVCA North Region Player of the Year was a two-time Big Ten Player of the Week and also garnered AVCA National Player of the Week award once this season. Samedy was the first Gopher since 2011 to accomplish 20 kills and 20 digs in a match and had 20-plus kills in five matches this season. She also led the Gophers in kills and points 10 times. She averaged 4.11 kills per set in Big Ten play and finished the year with 4.15 kills per set and averaged 4.69 points per set when she had 295 kills and 333 points. Samedy finished her senior year with 1,485 career kills, which ranks 10th all-time in Gopher history. Samedy has led the Gophers in kills all four years.

Pittman garners her third AVCA All-America honor as a Gopher middle blocker. A three-time First-Team All-Big Ten selection, the Spring Hill Kansas native was a Senior CLASS Award first-team selection. A Big Ten Defensive Player of the Week once this season, Pittman had three matches where she amassed double-digit blocks. She finished the season averaging 1.48 blocks per set. Pittman finished her red-shirt senior season with 502 career blocks. She also accumulated a .356 career hitting percentage and had 902 career kills. She ranks eighth all time in career blocks and tied for third in career hitting percentage.

Landfair, an outside hitter, was named a First Team All-Big Ten selection as a true freshman. The Plainfield, Ill., native was also named to the Freshman All-Big Ten team. The AVCA North Region Freshman of the year averaged 3.03 kills per set and ranked second on the team in kills (212). She led the Gophers in match kills five times this year and held double-digit kills 11 times. She was also named Big Ten Freshman of the Week two times this season.
Click to expand...

I saw on the KSTP-TV ticker that Adana Rollins is transferring. Any corroboration?

Ewert86PC said:
I saw on the KSTP-TV ticker that Adana Rollins is transferring. Any corroboration?
Click to expand... 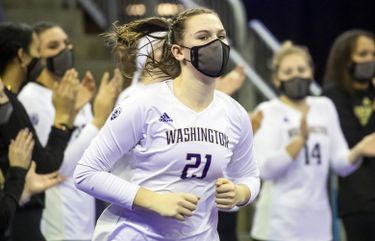 The principle of "good after good" is that regularly functioning at a high level — in practice and games — will produce a top-level product. In other words, striving for quality at-bats is a more effective strategy than seeking nothing...

Take, for instance, the Washington volleyball team’s approach to its craft.

Upon arriving on campus in 2015, Huskies coach Keegan Cook instilled in his players the “good after good” mentality. He borrowed the philosophy from former U.S. men’s volleyball coach Hugh McCutcheon, who is now coaching the Minnesota women’s volleyball team.

The main principle of “good after good” is that regularly functioning at a high level — whether it be hitting the weights, studying film, performing drills or competing in matches — will eventually produce a product that is top level. In other words, striving for quality at-bats is a more effective long-term strategy than seeking nothing but homers.

“To me, there’s nothing more powerful in the world than compound interest. Those little things add up,” said Cook, whose Huskies will play their first Final Four match since 2013 on Thursday when they meet Kentucky in Omaha, Nebraska. “If you can just make good plays for a long period of time, then great moments will happen, or things will kind of snowball into something great.”

This is a concept more conducive to volleyball than it is to other sports. A football game can be broken open with a few big plays. Same with a soccer match or hockey game. But in volleyball, even the most spectacular of sequences nets a team nothing more than a point.

Besides, the Huskies don’t typically win by overpowering foes like Serena Williams and her scorching serves. They do it with poise, patience and perseverance.

You know those basketball teams that intimidate opponents with a string of thunderous, pregame dunks? The Huskies are definitely not their equivalent.

“I think a lot of people are looking at our team and not understanding who we are, and that’s OK,” Cook said. “One thing we always talk about is that we want teams to kind of walk away from a match going, ‘What just happened?’ “

Cook stressed that he didn’t want that quote to come off as arrogant or disrespectful. Talk to the guy for 10 minutes, and you’ll see he is as humble as
he is thoughtful.

But it isn’t just opponents asking themselves, “What just happened?” when it comes to this team — it’s the whole college volleyball universe
Click to expand...

Rickman55 said:
I think Hugh is overrated. And my opinion is not just based on today’s performance. Great recruiter, but.....
Click to expand...

Hugh's been here 9 years and the Gophers have finished worse than 15-5 in the Big Ten only once. 3 Final Fours too so far.

Having watched Gopher basketball and football for over 3 decades, I think some people here need to keep things in perspective.

MRJ said:
From 2015 to 2018 the Gophers were clearly superior. They won eight in a row over the Badgers during that time, including a pair of conference titles, and lead the all-time series. So yeah, you can make the argument that the Gophers have been the better program several times over the 2000s, especially in the early 2000s and until the start of 2019.
Click to expand...

Yes, you can make an argument that the Gophers have been the better program over the last two decades. I was just objecting to the use of the word "embarrassment" in this instance. And embarrassment is what our football team has done against Wisconsin for over 2 decades. What did the Gophers have....a 25 game lead in the rivalry at one point? They sure pissed that away.

GibsonSG said:
Yes, you can make an argument that the Gophers have been the better program over the last two decades. I was just objecting to the use of the word "embarrassment" in this instance. And embarrassment is what our football team has done against Wisconsin for over 2 decades. What did the Gophers have....a 25 game lead in the rivalry at one point? They sure pissed that away.
Click to expand...