tikited said:
I saw a few of these last week. Her take on Mick Jagger is pretty cute.
Click to expand...

The kid totally shreds the solo at the end. While My Guitar Gently Weeps

Ope3 said:
The kid totally shreds the solo at the end. While My Guitar Gently Weeps

Well if we're doing kid covers, these two absolutely crack me up.

Many years ago, I caught Gillian Welch at the Fine Line and she sang Black Star by Radiohead-at the time, I wasn’t familiar with the original but the friend I went with was stunned by her version-came up on rotation for me the other day:

Robert Smith liked the Dinosaur Jr cover of Just Like Heaven so much, The Cure adapted some aspects into their live performances. Says so on wiki.

Also one of the few songs where the cover i think is better than the originals because... Debbie Harry

Last one and sorry to bombard, but Thin Lizzy did this classic song justice.

WorkingMyTailOff said:
I don't know who these metal heads are but I love the cover they did over a Replacements' cover

Not sure who some of these folks are but Ted Leo (the singer/priest) isn't a metalhead, he's just awesome. Although he does have some funny stories about being a Rush fan who spends most of his time with Punks.

This was on The Bottle Rockets tribute album Songs of Sahm, Mendocino (Sir Douglas Quintet)

This should of been at the front of the line as far as my favorite covers. Husker Du, Ticket to Ride:

I totally forgot about these guys. Rage Against the Machine brass cover band, Brass Against. Probably not for everyone, but my fellow UMMB alumni on the forum might like it.

I stumbled upon this live Jason Isbell ep on a recent visit to the Electric Fetus. Here is the 400 Unit treatment of Van Morrison's Into the Mystic

Go4Broke said:
No one who watched this cover of "Dancing in the Streets" during Live Aid has ever forgotten it.
Click to expand...

This is, by far, the best version.

My favorite version of "Ring of Fire".

I have seen in person Marshall Crenshaw perform this, but never thought to check it out on youtube. Since finding these over the weekend, I've already played them a few dozen times. Covering Grant Hart, 2541

with a little help from the Bottle Rockets

Ope3 said:
I have seen in person Marshall Crenshaw perform this, but never thought to check it out on youtube. Since finding these over the weekend, I've already played them a few dozen times. Covering Grant Hart, 2541

with a little help from the Bottle Rockets 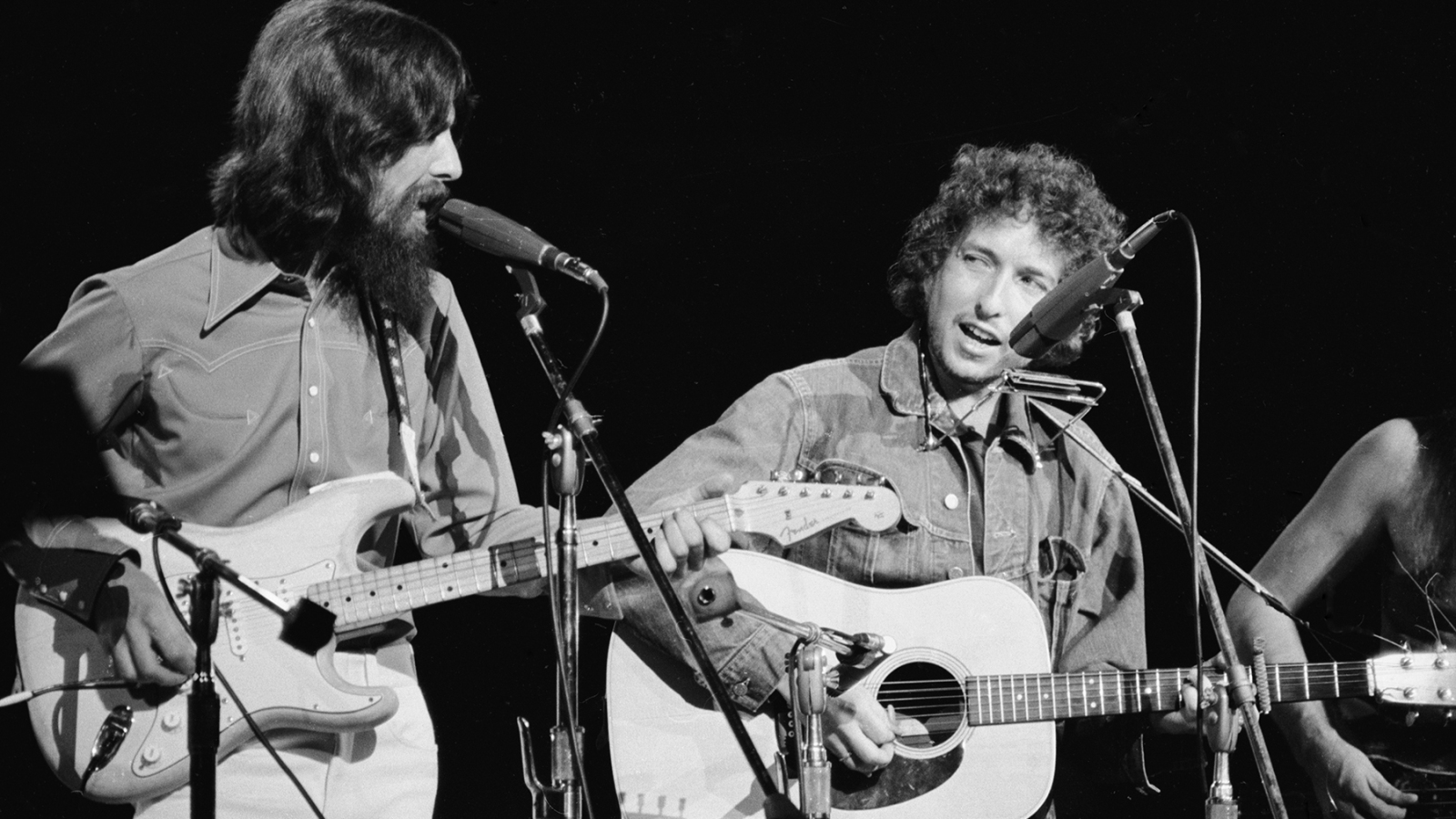 Weeks after the world learned that the Beatles were done, Harrison and Dylan met up in New York for an epic day of jamming

On May 1st, 1970, just weeks after the world learned that the Beatles were breaking up, George Harrison and Bob Dylan met up at Columbia’s Studio B in New York City. Joined by bassist Charlie Daniels and drummer Russ Kunkel, their stated purpose was to start work on Dylan’s album New Morning. But midway through the day, they switched gears and started jamming on old favorites without any thought that the results would ever be heard by the public.

Unsurprisingly, word of their jam session leaked out almost immediately. “Denials that the session took place were issued by Dylan’s personal secretary,” read a report in Rolling Stone later that month, “and by producer Bob Johnston, who chuckled: ‘Where did you hear that? Some people’ll say anything!’ But a session there was, and, according to reports, it was a monster.

Years later, the tape somehow leaked out of the Columbia vault and fans got to hear much of the historic session. It revealed that Dylan and Harrison began by trying out early renditions of New Morning songs “Sign on the Window,” “If Not For You,” “Times Passes Slowly,” and “Went to See the Gypsy.” But after their fifth attempt at “If Not For You” (a song Harrison would cut on his own weeks later for All Things Must Pass), they went back to Dylan’s early work and played “Song to Woody,” “Mama, You Been on My Mind,” and “Don’t Think Twice, It’s All Right.”
Click to expand...

Nico kind of sounds like a guy. Man I always thought that voice was Lou Reed. Love Velvet underground.

Both original and cover are F awesome. Lou Reed is the shit...

Nico was a German model who wanted more than being a model, so she started dating famous artists and was "discovered" by Andy Warhol. Soon after she was forced into the band and recorded a few songs on their first album. She went solo after that.

She was known to 'date' Jim Morrison, Iggy Pop, Brian Jones and many others. 'Date' can mean a lot of things.... My favorite Nico time period was when she lived in Detroit with the Stooges while dating Iggy.

I love the Canned Heat version, had no idea it was a cover. That flute? is iconic...

Wally said:
I love the Canned Heat version, had no idea it was a cover. That flute? is iconic...
Click to expand...

I didn't either until yesterday.

Richard Thompson is towards the top of my list of artists that I need to listen to more of their catalog. Thanks to Stereogum's "Number Ones", I came across his cover of Prince's Kiss which I think's pretty damn great: