The 5th set of this Korda match is the weirdest set of men's tennis I've ever watched. 12 breaks of serve in 14 games...

Rough day for the Americans, Korda, Keys and Coco all out.

Canada has 2 men in the Quarters, we have none.

And here we are, at the time of the annual "The rise, fall and hopefulness of American men's tennis" article from ESPN, this time with some legit optimism:

Hope in the next gen?​

Even if you're unsure of the ceilings of players like Opelka or Tiafoe, however, one thing appears nearly unanimous: Korda is the real deal.

"Korda's definitely the one," O'Shannessy said. "He doesn't beat himself, he doesn't go bananas on the court, he strokes it clean, the balance is great, nothing flusters him out there. There [are] no holes, there's no weirdness in any of the strokes, and he's just gonna get better."

Korda was born to a particularly athletic family. His father, Petr, is the 1998 Australian Open champion and former world No. 2; his mother, Regina Rajchrtova, was a top-30 player; and sisters Nelly and Jessica are currently the Nos. 1 and 13 golfers in the Rolex Rankings.

Frances Tiafoe's highest world ranking came in February 2019 (29th). He entered Wimbledon ranked 57th overall. AELTC/David Gray, Pool/Getty Images)
"His dad knows all of the potholes in the road," O'Shannessy said. "He can help guide his son around those potholes and give some advice and accelerate the learning. Every time I see what's going on with him, whether it's a win or loss, or how he's handling himself, or how he's speaking to the media, everything is done correctly." 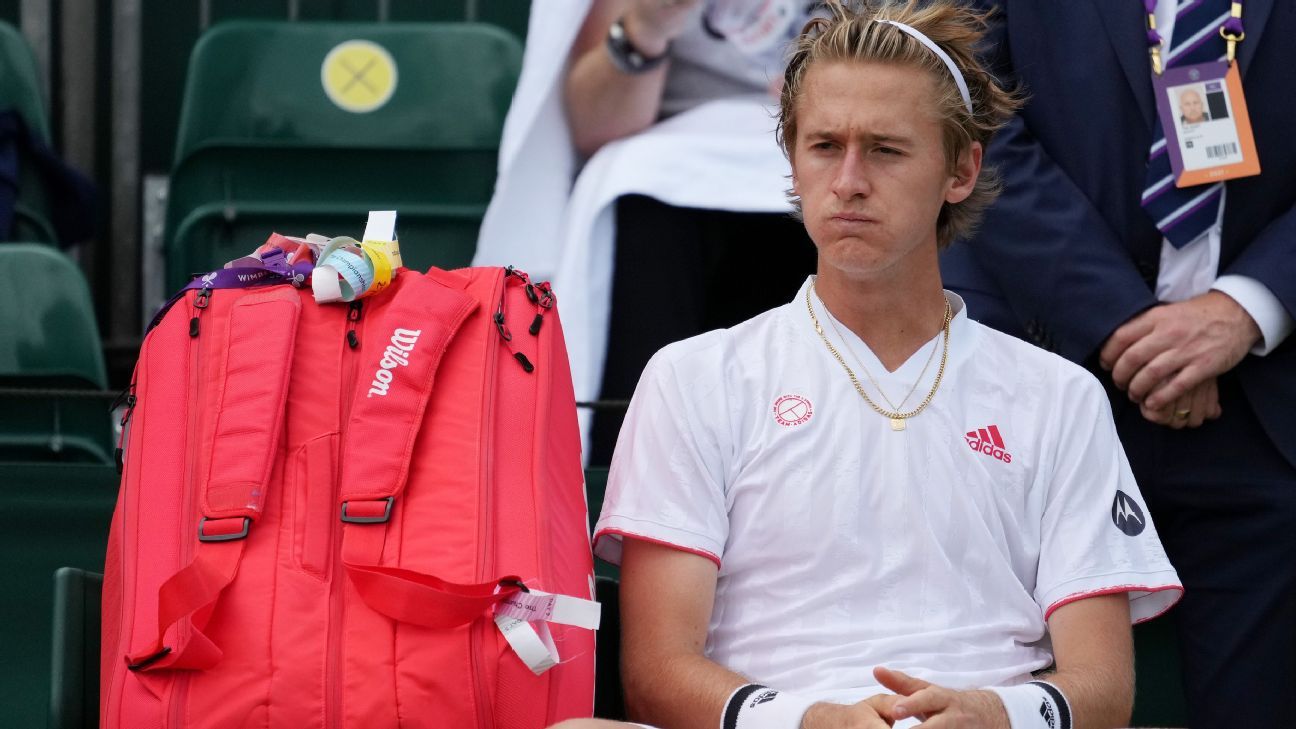 The rise, fall and hopefulness of American men's tennis

There are no American men's tennis players ranked in the top 30. What isn't the U.S. doing right, and is there hope on the horizon?

Tough to see Federer lose like he did today. My guess is this was his last Wimbledon match. My gut says he'll soon announce US Open is his last Slam and Laver Cup is his last match.

Caught some of the Djokovic/Shapovolov match. Must say Shapovolov kept it much closer than I expected.

Going to be a fun final tomorrow. Berretini's serve should pose quite the challenge on grass.

In a sense I am glad to see Barty win. I haven't really thought of her as a real #1 given that she only had one major win. To casual fans like me this is seems like validation of the ranking. It was an entertaining match. Pliskova put up a good fight.

Djokovic now 60% of the way to a calendar Golden Slam...unreal.

mplarson7 said:
Djokovic now 60% of the way to a calendar Golden Slam...unreal.
Click to expand...

He's a great player, but I really hope he gets beaten in the US Open.

Novak was brilliant yesterday and his court coverage was incredible as usual. It's amazing we have the three greatest players all with 20 Slams, heading into the U.S. Open. What a once in a lifetime storyline. Sure hope they aren't all three on the same side of the draw.

A fantastic and in-depth "Where are they now" on Pete Sampras from Sports Illustrated: 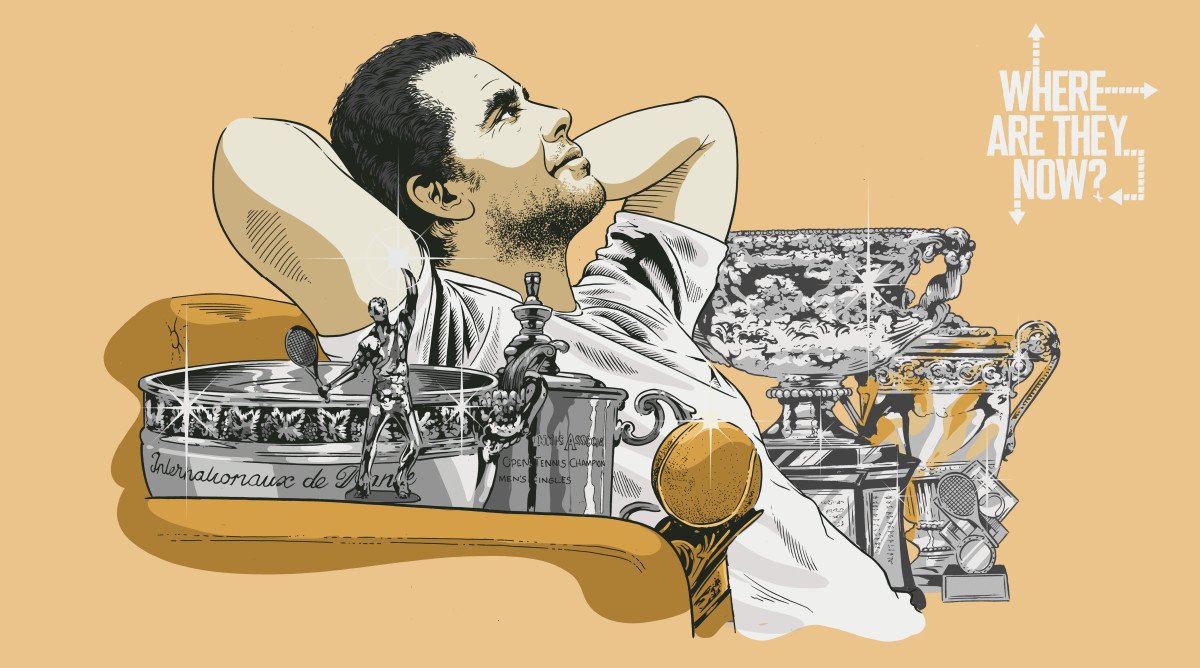 The tennis great doesn't seem to care about the spotlight—or the records he once held.

BleedGopher said:
A fantastic and in-depth "Where are they now" on Pete Sampras from Sports Illustrated:

The tennis great doesn't seem to care about the spotlight—or the records he once held.

Couple of notable results in the last grass court tournament of the year in Newport.

Jack Sock got a wildcard and made it to the quarterfinals, nice to see him finally win a couple matches.

Young gun Jenson Brooksby is through to the semifinals. He's currently ranked 152 and has a 21-2 record at the challenger level this year with 3 titles.

Impressive week for Brooksby...not only through to his first ever ATP final, but this is his first time ever competing on grass.

mplarson7 said:
Impressive week for Brooksby...not only through to his first ever ATP final, but this is his first time ever competing on grass.
Click to expand...

Djokovic into the semis in Tokyo. Here we go.....

He's also through to the semis in mixed doubles, so he can go for a bonus medal.

Another strong showing this week from Jenson Brooksby. He's through to the semis in DC and has yet to drop a set. His wins are over Anderson, Tiafoe, Auger-Aliassime (2-seed and ranked 15 in the world), and only ropped 3 games vs Millman. His semifinal match is against Jannik Sinner of Italy, another top 25 opponent.

Canadian Masters this week. Isner and Opelka are in the semifinals today, still the possibility of an all-American final.

Coco Gauff made the quarterfinals in the women's draw and Jessica Pegula is through to the semis, she plays later today.

mplarson7 said:
Canadian Masters this week. Isner and Opelka are in the semifinals today, still the possibility of an all-American final.

Coco Gauff made the quarterfinals in the women's draw and Jessica Pegula is through to the semis, she plays later today.
Click to expand...

Opelka came through! Faces Medvedev in the finals tomorrow, would be a very big win for him.

Coco Vandewegue involved in a strange situation where she refused to warm up after a heat delay before her 3rd set. She doesn't come across well in this video:

Fed to have his third knee surgery and is "out for several months." I have to imagine this is it, an unbelievable career. I had hoped he could play one last U.S. Open and then wrap his career up at the Laver Cup in late September.

I hope I'm wrong, but hard to see him coming back yet again.

Serena Williams added herself to the list of big-name withdrawals from the US Open on Wednesday, pulling out of the year's last Grand Slam tournament because of a torn hamstring.

Williams hasn't competed since injuring her right leg in the first set of her first-round match at Wimbledon in late June. 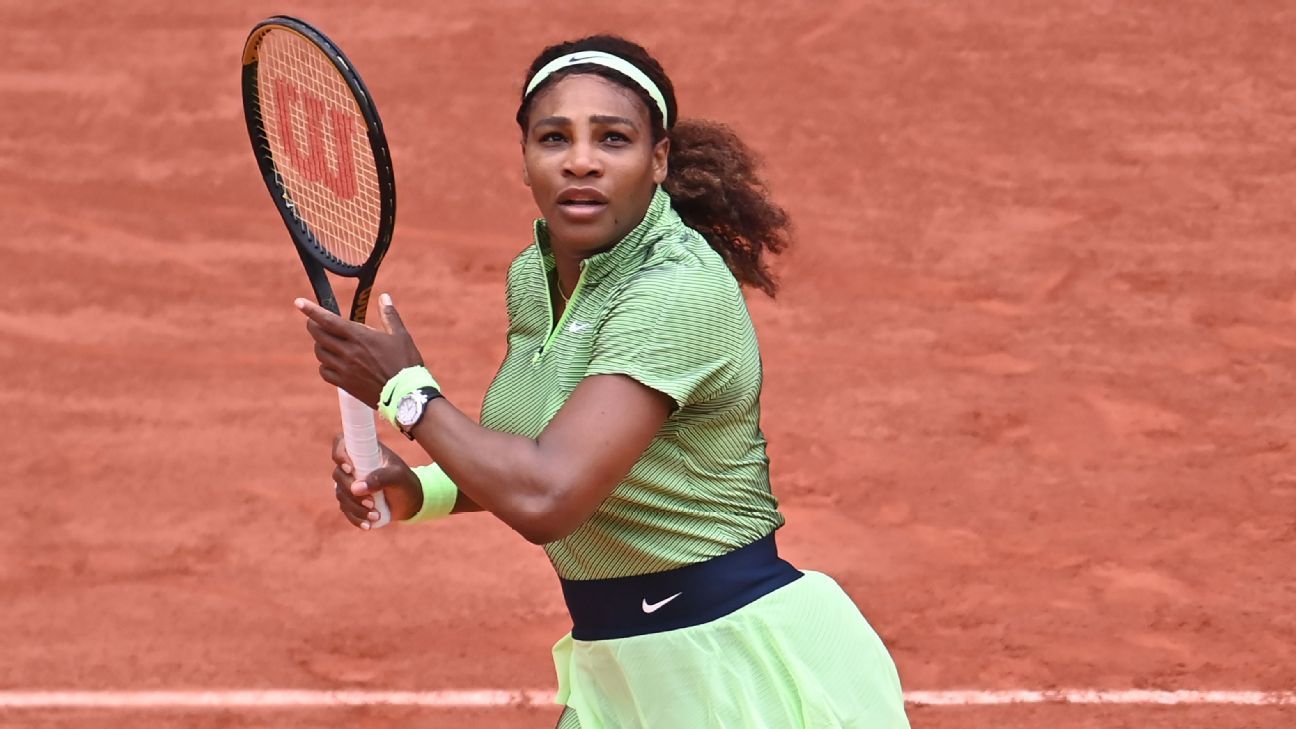 Serena Williams announced her withdrawal from the US Open, saying she wants to allow her body to heal completely from a torn hamstring.

First time a slam will not feature any of Federer, Nadal, or Serena since 1997. Yikes.

The US Open begins on Monday, and while many of the world's best players will return to New York after a pandemic-impacted tournament in 2020, as will a near-capacity level of fans in all their rowdy glory, it will be who isn't in attendance that might be felt most of all.

Serena Williams announced Wednesday that she wouldn't be playing in the year's final Grand Slam, joining Roger Federer and Rafael Nadal on the star-studded withdrawal list. Williams said her torn hamstring still hasn't fully recovered since Wimbledon, while Federer will need yet another surgery on his right knee and Nadal declared he'll miss the rest of the season with a recurring left foot issue.

It will be the first major where none of the three will participate since the US Open in 1997. If that feels like a lifetime ago, well, it's because it was -- five players currently ranked in the WTA's top 10 weren't yet born.

Since then, the trio have combined for 63 major singles titles -- with Williams adding another 16 in doubles and mixed doubles -- and an astounding 838 weeks atop the world rankings. While Novak Djokovic is considered the third member of the sport's Big Three and could very well ultimately surpass all of them in titles and records, Williams has been the true owner of the distinction for the better part of the past two decades alongside Federer and Nadal.

They are arguably the biggest superstar trio tennis has ever seen, with unparalleled on-court success and an A-plus level of fame, popularity and endorsements to match. Williams has won more major titles than anyone else during the Open era, and Federer and Nadal are tied (with Djokovic) for the most ever among men. They've taken tennis to the mainstream and become one-name phenomena -- Serena, Roger and Rafa -- along the way, as comfortable on red carpets and talk shows as they are on the tennis court.

While none of the three has mentioned retirement and they have expressed varying promises of return in their statements ahead of the US Open, it seems clear the end of an era is rapidly nearing.

Sure, on a practical level, that should be no surprise. Athletes age, and one day, no matter how many records they've broken or accolades they've achieved, they can no longer outrun Father Time. Williams turns 40 next month, joining Federer, who reached the milestone birthday a few weeks ago. Nadal is 35.

Yet despite their advanced ages (for professional sports, that is), for so long it seemed as if the three defied the laws of time and aging. Williams won the 2017 Australian Open at 35 and while pregnant, then returned to make the final in just her second major back after giving birth. Of course she could play at a high level into her 40s, right?

We've almost taken for granted their improbable dominance because it felt like they had been around forever and would always continue to be. There have been obvious hints of the end in recent years, as the recoveries from injuries took longer than they once did and the level of play from the next generation of players continued to rise.

Despite that, the three have remained stalwarts in the top 10 and contenders in nearly every event they've played. Williams just fell out of the top 20 this month for the first time since her comeback in 2018, while Federer and Nadal are still in the top 10. 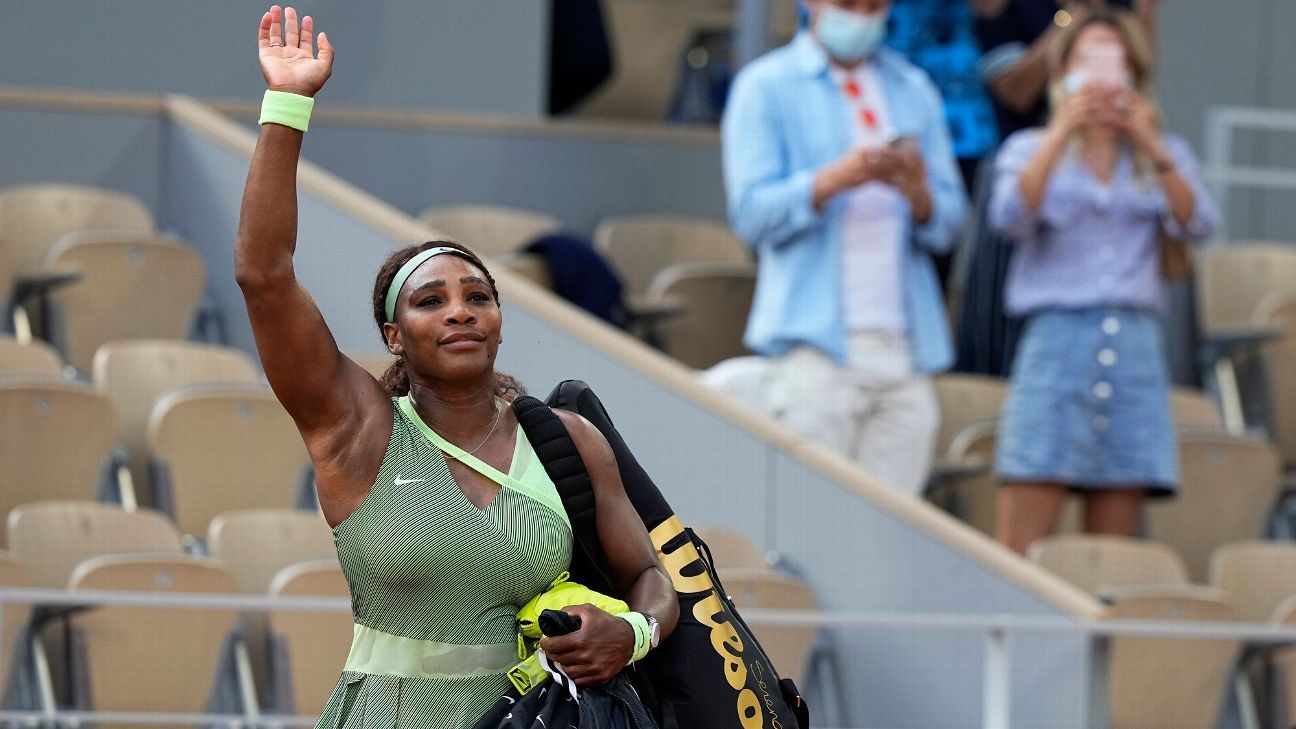 With Serena Williams joining Roger Federer and Rafael Nadal on the US Open withdrawal list, the sport must brace for a time without its biggest names.

US Open begins today. Unfortunate matchup with Keys and Stephens matching up first round and if I read the draw correctly, the winner will likely play Coco. In a year with dwindling star power, the USTA did themselves no favors by matching up the American women so early.

Unbelievable first round match, first match on Ashe for the Tournament. Such a shame these two American's allowed their rankings to drop so far that neither is ranked and they face each other in the first.