Are these guys able to win so late into their 30's due to diet and fitness, or has the evolution of the game and rackets extended their careers?

It can't be a coincidence that all 3 are still winning at their ages, whereas virtually none of the past greats did much beyond age 30.

TruthSeeker said:
Are these guys able to win so late into their 30's due to diet and fitness, or has the evolution of the game and rackets extended their careers?

It can't be a coincidence that all 3 are still winning at their ages, whereas virtually none of the past greats did much beyond age 30.
Click to expand...

It's a combination of a few things: players are taking care of their bodies so much better than even the Agassi/Sampras era, technology has absolutely played a HUGE role, and the technology factor has pushed the start of players' careers back a number of years, so they are starting their pro careers later. The days of a 17 year old man winning a Slam are long gone.

Wow, a shocking development on the women's side:

BleedGopher said:
Wow, a shocking development on the women's side:

This whole episode was so bizarre.

Serena improved to 77-1 lifetime in first round Grand Slam matches, which is an absolutely mind-blowing record.

Venus easily knocked out of the 1st round at the French Open. She hasn't made it to the 4th round of a Slam since 2017.

I admire that she's still playing, she must absolutely love the game.

Only 3 Americans left after Serena's loss today, and all on the women's side: Kenin, Gauff, and Stephens.

Djokovic vs Nadal semifinal. How juicy.

Hard to see Nadal not winning the French, though he did surprisingly drop a set to a guy I love, Diego Schwartzman.

The women's semis are a "meh" - sure disappointing to see Serena leave these chances on the table. Her clock is ticking fast for her to get #24.

Oh my, what a match.

Heck of a match from Novak. Never in a million years did I expect Nadal would lose three straight sets. Novak is so mentally tough.

I'm a HUGE Federer fan, then Nadal and Novak is a distant third for me of the Big 3...looks like Novak will end up with 23-25 Majors given his health, age and surface versatility.

Pretty shocking match so far. Djokovic just doesn't have it so far today, blew the whole tank in the Nadal match maybe?

Novak had it today when it mattered.

Stan said:
Novak had it today when it mattered.

That he did, crazy turn around. He was looking horrible end of the 1st set to the start of the 3rd, I figured he was toast.

Tiafoe won a warm-up challenger event last week and won his first match at Queen's Club this week. He plays against Viktor Troicki next, who is really far down in the rankings from where he's been previously.

Seb Korda had a very strong win in Halle over Roberto Bautista Agut, who made it to the Wimbledon semis in 2019.

In the WTA, Coco Vandeweghe is still working on here comeback. She is currently ranked outside the top 200, but won her first match in Birmingham. Both of her career titles have come on grass.

In Berlin, Madison Keys won her first match. Anisimova's slide continues, she lost her first round match. She is down to 78 in the world, I believe.

Felix Auger-Aliassime rallied from a set down to claim a statement win against former World No. 1 Roger Federer on Wednesday, triumphing 4-6, 6-3, 6-2 to reach the quarter-finals at the NOVENTI OPEN in Halle.

The 20-year-old Canadian was calm and confident against his childhood idol, even after narrowly dropping the opening set on one of Federer's favoured courts. The two-time Stuttgart finalist completed the comeback to secure his fourth Top 10 victory (4-15) and one of the biggest wins of his career.

“It’s an amazing win, and I for sure didn’t expect this. Of course you come into the match wanting to win, but Roger was my idol, like many of us growing up,” Auger-Aliassime said, grinning in an on-court interview. “It was a huge honour to play him before he retired, and to beat him is something amazing that I will always cherish.” 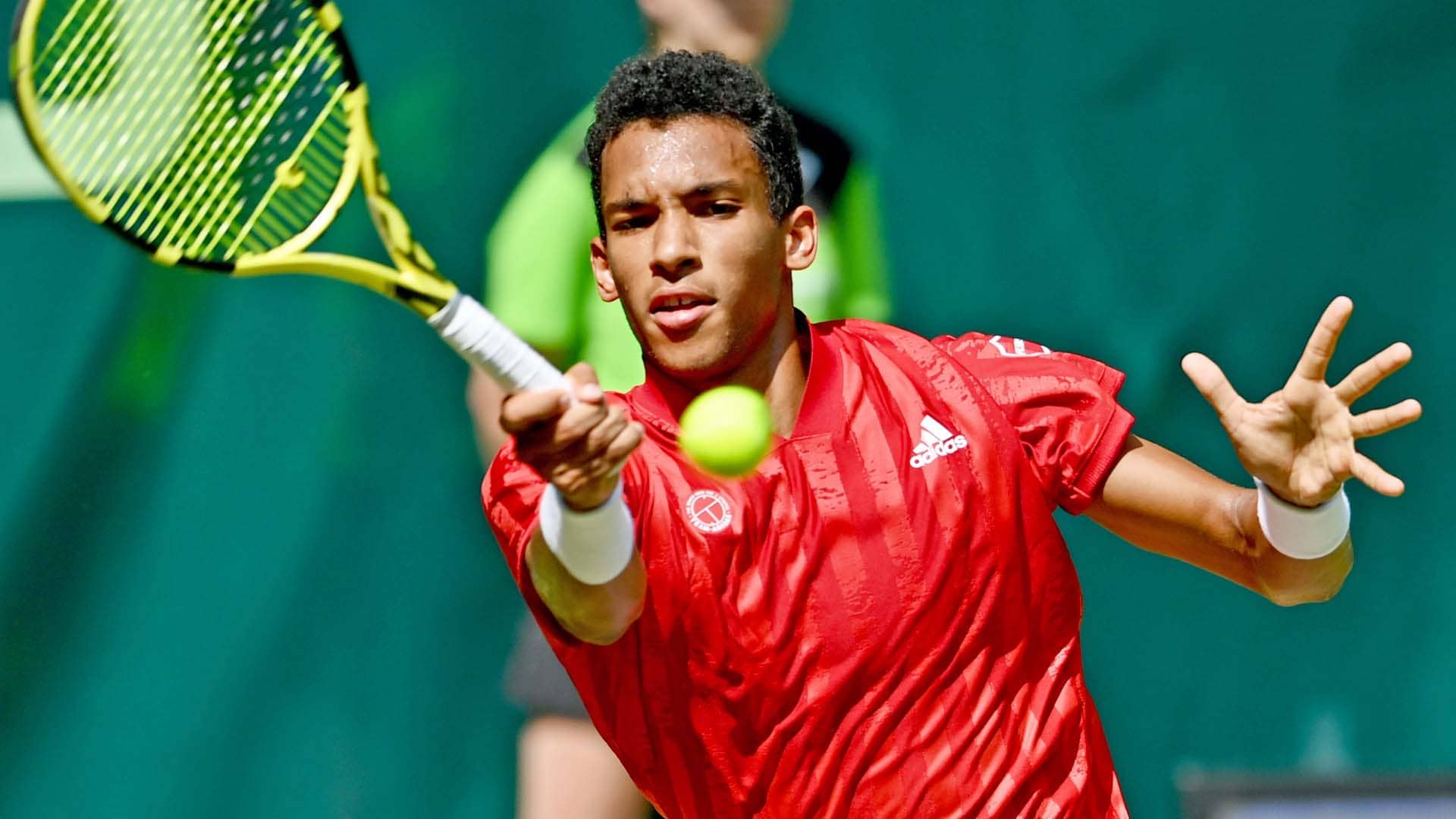 Felix Auger-Aliassime rallied from a set down to claim a statement win against former World No. 1 Roger Federer to reach the quarter-finals at the NOVENTI OPEN in Halle.

So now Nadal is going to "listen to his body" and pre-emptively pulls out of Wimbledon and the Olympics. He's essentially conceding Wimbledon to Fed or Novak, similar to what Fed did at the French Open. Novak has to be laughing at this as he'll waltz right past them as early as this September for all time Slams leader.

Shocker to see Nadal pull out of both Wimbledon and the Olympics. But he has really struggled on grass since 2011, so he didn't stand a great chance against Djonovic there anyway.

Not surprisingly, yet still disappointing, Osaka withdraws from Wimbledon. She will play in the Olympics in her home Country. Hopefully she plays US Open as well.

Serena, clock is ticking. Let's win #24 at the Fortnight.

Pickle ball appears to be an activity for people who find tennis fairly difficult.

Huge straight set win for Tiafoe over Tsitsipas, Tiafoe's biggest win of his career. Let's hope he can parlay this into a breakthrough Slam and beyond.

Nice wins for Kudla and Sloane Stephens as well, though the latter should be a top 10 player herself.

That whole section is wide open now, highest seed remaining is #15 de Minaur. Great opportunity for Tiafoe, the question is if he can find that level of consistency.

mplarson7 said:
That whole section is wide open now, highest seed remaining is #15 de Minaur. Great opportunity for Tiafoe, the question is if he can find that level of consistency.
Click to expand...

Seb Korda beat de Minaur today, which now leaves #22 Daniel Evans & #25 Karen Khachanov the only seeds in that section. Maybe Nelly's win in the LPGA championship will light a fire for Seb.

Wow, what a shame:

Federer's opponent slipped and had to withdraw. I saw Novak slip 2-3 times yesterday.

Me thinks Wimbledon will be under some massive pressure and criticism if its link to court conditions.

Tiafoe and Sebi each won their second round matches in straight sets. They are 1 match away from an epic Young American 4th round matchup.

Kenin and Anisimova both lost today, both continuing their rather disappointing seasons. Both are now sub-.500 on the season. Anisimova is down in the 80s after making the French semis a few years ago as a 17 year old.

Stephens out, Tiafoe out, Sebi moves on!! Korda has another winnable match, he's taking advantage of a solid draw.