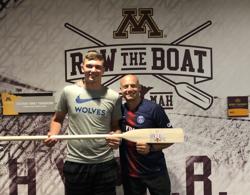 Wyatt Schroeder, a 6-foot-6, 220-pound senior tight end from St. Francis (MN) High, is ranked as one of the state’s top players in the Class of 2020. He committed to Minnesota this summer as a preferred walk-on after having previously committing to South Dakota State.

Wyatt Schroeder is a versatile athlete who also plays basketball for the Fighting Saints.

Gopher Hole: You got to be at US Bank Stadium a lot this weekend. You were in the Minnesota Football Showcase yesterday. What was that experience like?

Wyatt Schroeder: It was really cool experience getting to be down here and see the whole stadium and really just getting to play with new players and becoming teammates with guys that I have played against in my conference  and throughout the state in camps, so it was really cool, making friendships and playing with those guys.

Gopher Hole: Was that kind of sad in a way because that is kind of your last game as a high school player?

Wyatt Schroeder: I feel like if I didn’t have something to really look forward to, I would be sad, but it is just the end of a chapter. It is new beginnings and I’m looking forward to what is next.

Gopher Hole: Today, you were part of the Minnesota Vikings’ All-State team (they were announced on the field before the Vikings-Lions game). What was that experience like?

Gopher Hole: Does that make you think about if you maybe work hard that perhaps you could play on this field?

Wyatt Schroeder: Yeah. I think ever since I committed to the University of Minnesota and ever since I was getting scholarship offers, I think I realized that is an opportunity, if I just work hard enough.

Gopher Hole: You committed to Minnesota as a preferred walk-on back in August. What was the main reason that you decided that Minnesota was where you wanted to be?

Gopher Hole: You had other offers. Was it hard to turn down offers to pay for awhile and hopefully work your way onto a scholarship?

Gopher Hole: I don’t know if you seen, but in the past, they have several other preferred walk-ons like Blake Cashman, who is currently playing in the NFL now. Does that let you know that if you work hard and do the right things that could be you?

Wyatt Schroeder: Definitely. Definitely a factor seeing that and just talking to Coach Fleck and there is no doubt in my mind that I’ll be able to earn a scholarship eventually.

Gopher Hole: You are playing basketball now. How much do you think basketball helps you as a football player in terms of footwork and things like that?

Wyatt Schroeder: For sure. It helps me a ton. The whole time growing up in high school, like ninth and tenth grade, I always thought I was going to play basketball in college. Just seeing where the athleticism of playing basketball took me on the football field is a huge difference and I realized that I could be a playmaking tight end and things just took off from there.

Gopher Hole: It seems like a lot of tight ends are good basketball players. I don’t know if you follow it, but Kyle Rudolph was a great rebounder. Do you think a lot of that translates in terms of jumping and hands?

Gopher Hole: What have they said about expectations for you coming in as a freshman?

Wyatt Schroeder: I know that I am going to be redshirting this first year, for sure.

Gopher Hole: Is that something that you are kind of looking forward to, getting a little bit stronger?

Wyatt Schroeder: I am looking forward to it. Just putting on weight. Getting a little bit stronger. A lot stronger. Strong as I can get. Learning the offense. Route running. All that. I’m excited to do it.

Gopher Hole: What do you see as your strengths as a player?

Wyatt Schroeder: Route running, hands, ball skills. I mean I played receiver all four years in high school. I think the biggest thing I might need to work on is getting used to playing tight end and blocking. Strengths are everything outside.

Gopher Hole: Obviously, the Gophers are kind of known as a running team, but they had two receivers who were first team All-Big Ten. Does that kind of get you excited that you could be part of that offense?

Wyatt Schroeder: I’m super excited. I am looking forward to playing with some of those players. I’m excited to see what Brevyn Spann-Ford is going to do these next couple of years. He is a freak and I just hope that I can come in and be a role player like him his first year.

Gopher Hole: Did you ever play against him in basketball? He was also a basketball player, too.

Wyatt Schroeder: I never played against him in a real game or playoff, but we would have summer scrimmages against him when I was younger in high school and just seeing how his body has changed and how he has become a great tight end. I could see myself doing that, too. It’s exciting.

Gopher Hole: What is it going to mean to you the first day as a freshman when you walk onto TCF Bank Stadium?