By: Daniel House
Photos provided by the Najarian family

The crickets chirp as options trader Pete Najarian adjusts his long locks of hair and tosses bags into the car. It’s 5 a.m. and Najarian is preparing to make his weekly trip to New York. He grabs his phone, checks the stock market, and gets in the car. His wife, Lisa, drives him to the airport and Najarian moves swiftly to catch his flight. He sips his coffee, tweets a motivational quote, and boards the plane. The wheels of the plane hover off the ground and Najarian tweets his daily “Giddy up” hashtag. On the plane, Najarian is reading the news to see if any overnight developments may impact the stock 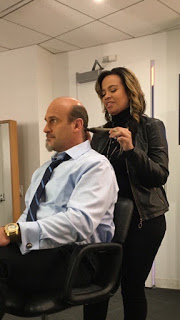 “I’m just staring at the market looking at anything going on that could influence the market in any way,” Najarian said.

The plane lands in New York and Najarian sprints to meet his long-time personal driver, who takes him to CNBC studios. A television personality on CNBC’s “Fast Money Halftime Report,” Najarian makes the weekly trek to New York from Minnesota.

It’s just another day in the life of the University of Minnesota physiology graduate and NFL football player, turned options trader and CNBC contributor. The pony-tailed football star was well-known for his debilitating hits as a linebacker for the Minnesota Golden Gophers, Tampa Bay Buccaneers, and Minnesota Vikings. That is until he traded in his shoulder pads for a suit and tie.

Najarian arrives at the studio and applies his makeup while meandering through the corridors of the studio. He enters the set and opens his computer with the show minutes away from beginning at 12 p.m. ET. He doesn’t have time to speak with the other personalities on set, even fellow guest and brother, Jon Najarian

“A lot of times since we don’t talk to each other, I don’t know what my brother is thinking,” he said.

Before moving to Minnesota, Najarian would make the 60-mile commute from his New Canaan, Conn. home to New York. A Minnesota boy at heart, Najarian returned to his home state in 2014 after spending seven years in Connecticut. The decision was fueled by his family. Pete’s brother, Paul, passed away in 2014 after a long battle with ALS. Najarian and his wife decided family was more important than convenience. 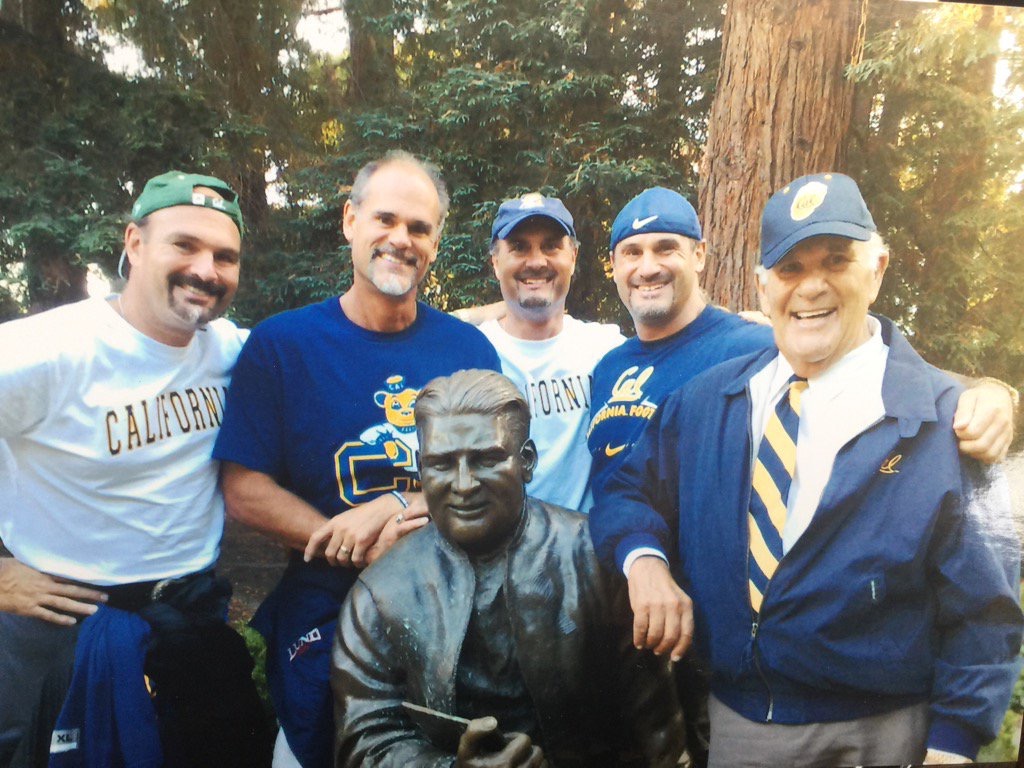 “We just kind of looked at each other as a family one day and we felt like we kind of needed to move to Minnesota,” said Najarian, the father of two children, Kole and Alexis.

After his move back to the Land of 10,000 Lakes, Najarian would leave Minnesota at 5 a.m. Monday morning and return home at 4:30 p.m. on Thursday. During his fall work as a color commentator with ESPN, he would depart on Friday and return Sunday morning. This wasn’t easy for the father and his family. Najarian recently scaled back his schedule by doing remote live shots from WCCO-TV in Minneapolis and calling just three games in the fall for ESPN. However, Najarian still makes almost 50 trips per year to New York for his work on CNBC.

He learned how to overcome this challenge by watching his father, Dr. John Najarian, a world-renowned surgeon. Dr. Najarian, the former Chief of Surgery at the University of Minnesota, performed the world’s first kidney transplant in a patient with diabetes mellitus. Growing up, Pete said he spent time in his dad’s office watching live transplants. He saw his father’s humble and caring personality impact others.

It’s why despite all of his success, Pete Najarian relates with people from all walks of life. His humble personality makes the investor special, according to his wife, Lisa Najarian.

“He’s very humble in all aspects, so he can appeal to everyone,” she said. “He can appeal to the CEO and President, or the janitor, the garbage man or the homeless man on the street. He is very grateful.” 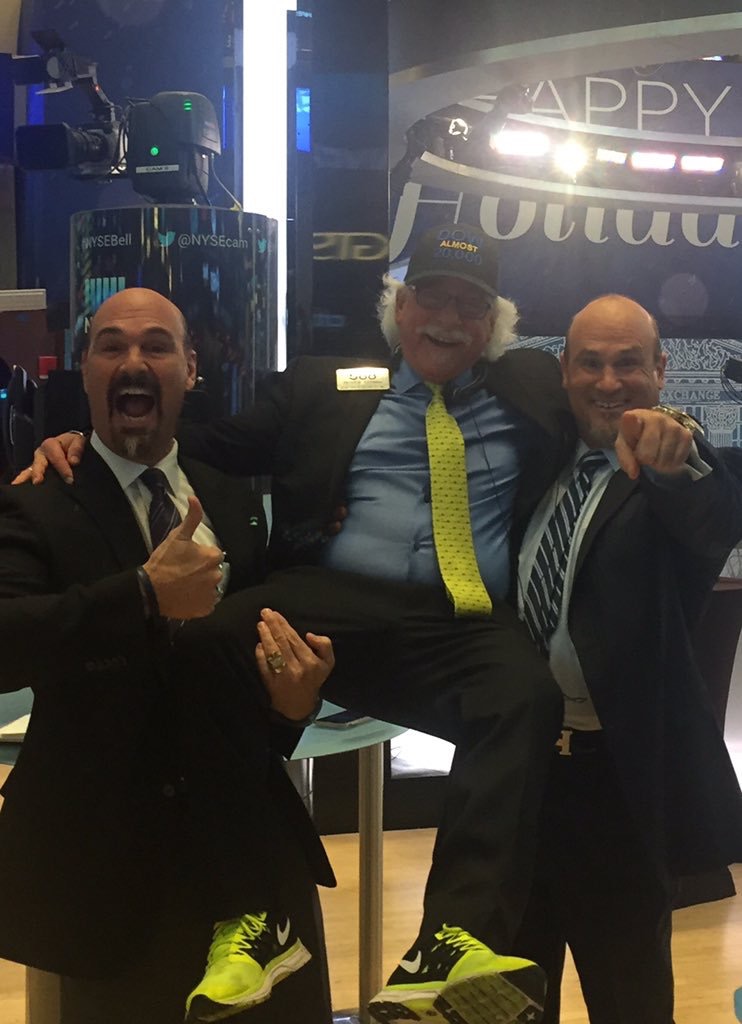 Najarian aspired to be a doctor, but had a change of heart after his football career. It wasn’t without a nudge from his brother, Jon Najarian, who already cemented himself as one of the top traders in the world.

Najarian started as a clerk for his brother’s firm in Chicago and worked his way up to president of Mercury Trading in 2000. He held the position for four years, until the company was sold to Citadel LLC in 2004. Pete said he and his brother worked well together in leadership positions for the company.

“I do not recall ever having an argument with him about a trade,” he said. “He just trusted me to oversee it. Somehow we just seem to be in tune with what the other guy is thinking.”

With more computer automation entering the world, Najarian and his brother left the trading floor and started another business venture called, tradeMONSTER, a company they sold to E-Trade in 2016. The brothers now provide trading advice through their company, Investitute.

They also recently co-wrote a book entitled “The 22 Rules of Investing,” which gives investment information to the casual reader.

“Pete brings a very different perspective to CNBC – that of an options trader,” Gerwitz said. “Very few people have been as successful as he has been in this area of trading.”

Aside from his business ventures, Pete Najarian’s love for football still has a place in his career. After developing a relationship with Lou Holtz, his former coach at Minnesota, Najarian was invited to speak in front of thousands at a four-person panel event.

“The top guy was there from ESPN,” he said. “He said to me after my talk about Lou to send my resume. After that, he hired me almost immediately.”

Najarian was cast as a host on the ESPN Goal Line channel, which broadcast from 12 p.m. to 12 a.m. every Saturday. The challenge: the show had no commercial breaks and required Najarian to prep for over 70 teams, bouncing from game to game on live television.

“I finally convinced them that I wanted to get out and do games more,” Najarian noted. 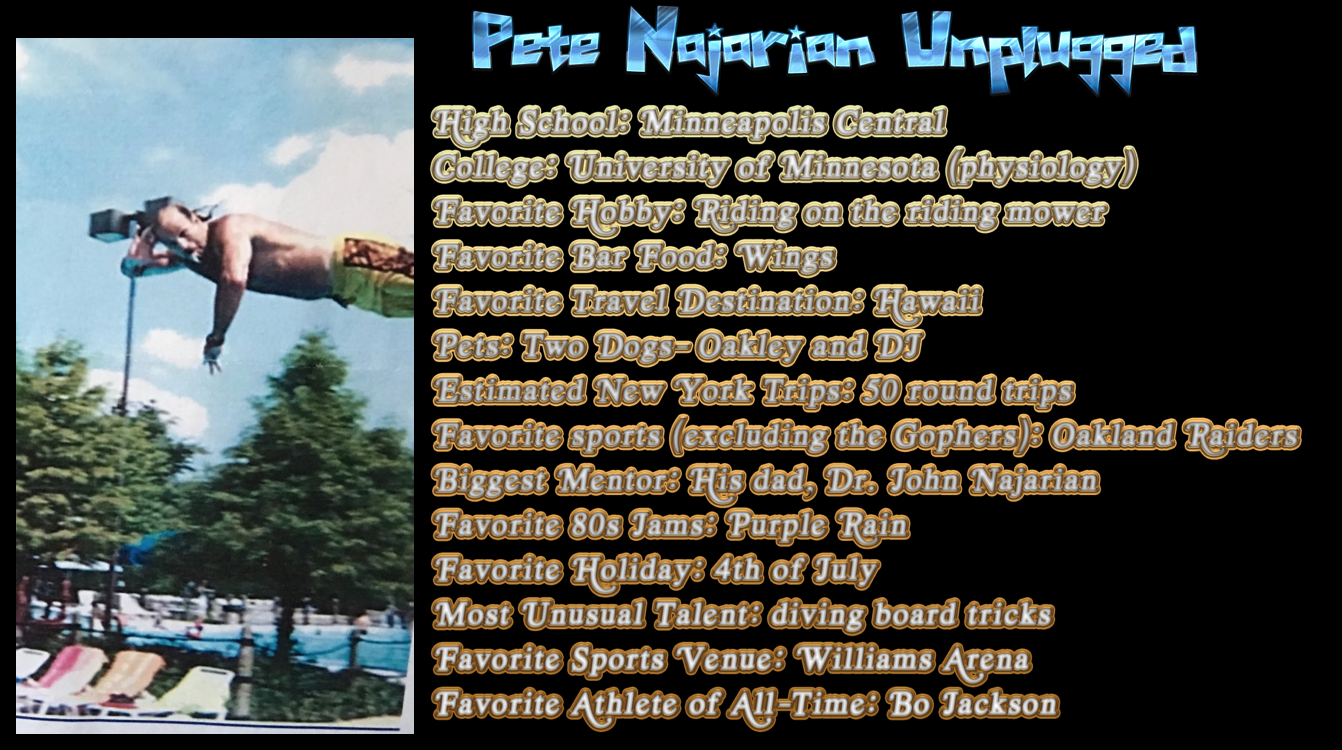 He was assigned to 12 regular season matchups, including a bowl game in 2015, but recently scaled his schedule back to three games.

Despite all of Najarian’s business ventures, he manages his crazy schedule with help from his wife, Lisa.

“Lisa is the rock behind that. She does a great job of keeping my schedule in some kind of order from just being chaotic,” Najarian said.

Najarian’s heart now lives in the stock exchange. When the options trader thinks about where he came from, it’s hard to imagine he went from Minnesota student-athlete, to one of Trade Monthly magazine’s top-100 traders.

However, Pete Najarian’s heart will always center around Minnesota, where it all started. The nights he spent in his dad’s office as young child, the days he aspired to be a doctor, and the moments on the gridiron, were the foundation of the trading career he built.

The long days on the trading floor transformed Pete Najarian from a tough, Minnesota raised student-athlete, into a world-renowned renaissance man.