Walley, a Biloxi, Mississippi native chose the Gophers over in-state schools such as Ole Miss and Mississippi State along with top national programs like Baylor and Auburn. He adds to a 2021 class that is currently rated as high as 24th nationally on some recruiting sites, which now has four total defensive back commitments. Walley joins Avante Dickerson, Steven Ortiz and Darius Green making a deadly future for the Gophers defensive backfield. 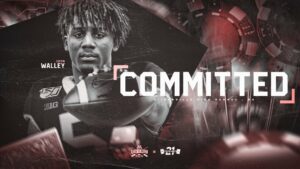 Justin Walley is a 5’10” 185 pound defensive back who is listed as a cornerback, but he captained the back end of his team’s defense all over the field. Last season as a junior at D’Iberville High School he recorded 74 total tackles and three tackles for loss while forcing seven fumbles and bringing in one interception. Even though he was recruited to play corner, he still contributed on the offensive end making plays all over the field, as a running back, receiver and return man.

The strength of Walley’s defensive game is his instincts, as he seems to always find himself around the ball. For a position that historically lacks elite tackling, he breaks the mold, while being almost a sure thing to take down the ball carrier. His athleticism shows up consistently on film making big play after big play all over the field let alone as a defensive back. The Mississippi native has the versatility to play as a deep safety, in the box, or as a traditional cover corner, so it will be interesting to see how Gopher DC Joe Rosse decides to use him, although Justin has stated that he currently expects to play cornerback.

Walley was blown away by Coach Fleck and Minnesota’s hospitality ultimately leading to his commitment. “It’s just Coach Fleck and the coaching staff, I love the way that they made Minnesota a family and the direction they are taking their program is something I want to be a part of,” said the future Gopher.

Before Justin Walley comes to the Twin Cities in the fall of 2021, he has one goal in mind for his senior season, “I want to focus on just staying healthy and winning state before I graduate.”