Will the Gophers crack the Top 25 this week?

We are in a good neighborhood with Alabama.

DelawareGopher said:
But MSU won’t be a “quality win” according to the media. MSU will have lost to an unranked Minnesota team and fallen to 2-2, so obviously they were never good in the first place! Therefore, Minnesota didn’t beat a good team and gets little credit.

The disrespect gets old and the circular poll logic is infuriating. But let’s just hope we get the win at Sparty—which won’t be easy. People will start paying attention eventually if we keep winning.
Click to expand...

Don't worry about early disrespect. These are just twits who follow the bandwagon. As soon as somebody serious starts talking about the Gophers the lemmings will jump on.

If the Gophers were in the SEC, they would be ranked.

GVBadger said:
If the Gophers were in the SEC, they would be ranked.
Click to expand...

My guess is that they would be ranked somewhere between 13-18 if there were in the SEC. The bias is terrible and yes, it DOES MATTER.

Guardian of the Western Front

So where the heck are the Gophers?

Oregon Gopher said:
So where the heck are the Gophers?
Click to expand...

I always hate it when people say ranking don't matter. Ranking help recruiting, determine bowl bids and national and local perception/conversation/interest in the team. If we beat MSU, one could argue that we have a better resume and team than Kentucky. However, because of preseason perception in ranking one will be top 10 and the other will be lucky to be in the top 25. MN won't get into the top 10 unless we beat Penn State and will need to remain perfect to stay there (1 loss and down we will tumble). Bottom line is rankings don't matter if the goal of your team is bowl eligibility and/or just to get a Rose Bowl bid (that is largely determined by B1G record). However, if your goal is to produce an eventual national championship contender and get a New Years bowl if you have only 2 losses, then preseason/early season rankings matter.

Oregon Gopher said:
So where the heck are the Gophers?
Click to expand...

Apparently the SEC teams are more important than Minnesota because they placed their logos over the M. 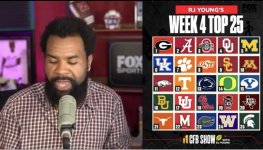 I’m almost certain we have to win by double figures to vault up in the rankings.

70% chance we get into the teens if we win by 15+ and it isn’t in doubt of victory the entire second half.

GVBadger said:
If the Gophers were in the SEC, they would be ranked.
Click to expand...

Would we if we were Vanderbilt or Mizzou???