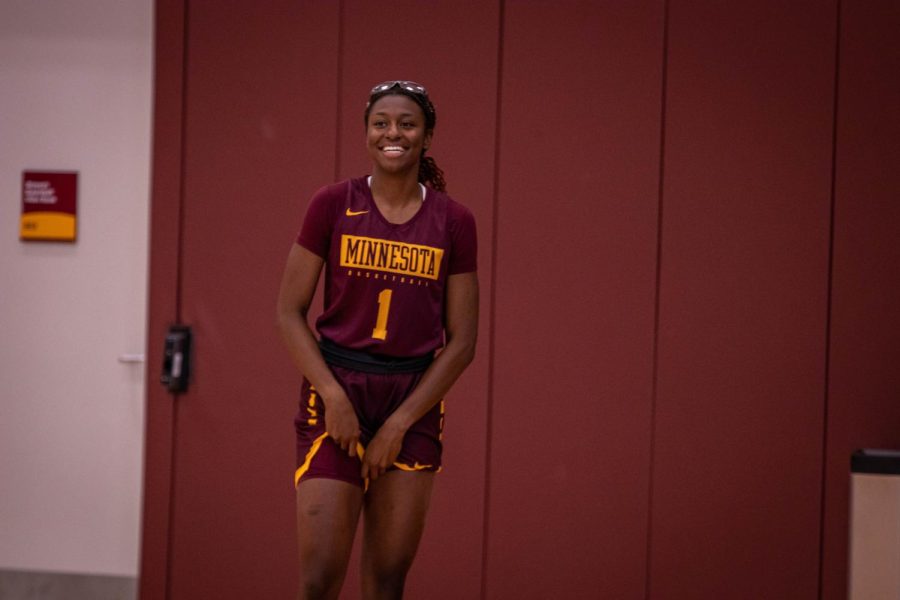 The Minnesota Daily interviewed Holloway to get her perspective on her first months as a Gopher.
mndaily.com

Yes, I already miss her. She fills the teams personality gap.

Nia Holloway is primed to lead the Gophers next generation of female athletes. She was a multi-sport athlete in high school, ranking No. 45 in the nation in basketball, according to Prep Girls Hoops, and winning the state high jump event twice in track.

As Holloway’s accolades and recognition grew, the Star Tribune took notice and featured her, along with seven other accomplished women athletes, in a piece under their “Title IX Turns 50” series. In this piece, they labeled Holloway as “The Rising Star.”

“I honestly think it’s amazing,” Holloway said. “Little Nia would probably be like, ‘Oh my gosh, you’re doing so well now.’ It’s so cool to see my work paying off in that way.”

‘Little Nia’ spent her childhood in Eden Prairie with her parents and four siblings. During this time, her family taught her the values of being goal-oriented and competitive, but also to remain tightly-knit and supportive of one another. She continued to practice these values in areas including, but not limited to, the classroom, on the track and on the court.

“I know that my family has my back, so why wouldn’t my team family have my back the same? And why wouldn’t I have their back,” Holloway said on the topic of family values.

Transitioning from being a multi-sport athlete in high school to focusing on a single sport may sound like a lighter load, but incoming freshmen, such as Holloway, are quick to find out otherwise.

“It’s more busy than you think it is,” Holloway said. “At first a lot of people, even me, thought I’m going to have so much free time, but [now] I have all this stuff, classes, workouts, individuals, meetings.”

So in true basketball player fashion, the freshman looked to the veterans for help.

“My parents [told] me make sure you value the time you have for yourself,” Holloway said. “If you have time to take an hour nap, take that time.”

Holloway said she learned that creating healthy habits can often translate to better production on the court. In fact, she’s made a career out of it. She has improved her speed and endurance through a recognition of patterns between the sports’ stretches and drills, helping her become a complete player. And now that she’s at the collegiate level, Holloway continues to build healthy habits with her teammates.

Summer practices started June 13. It was a small group, but still enough to get a feel for the team’s progress on chemistry and what it can become later in the year.

“Our chemistry is so good this year. I’m so excited to see what we can do,” Holloway said.

After finishing 10th in the Big Ten, the Gophers experienced a heavy overturn on its roster. The overturn was made up of seven transfers (most in the Big Ten), including key contributors Sara Scalia and Kadi Sissoko.

“Honestly, especially because I wasn’t here last year, I can’t speak on why people left. I’m sure everybody has a different reason, probably valid reasons,” Holloway said. “But I think it’s more important that we keep pushing forward. It’s not something that you can just sit around because the season gets going. I’m glad that we’re going to have the opportunity to keep building on what we have left instead of focusing on what’s in the past.”

In an effort to rebuild the future of the program, head coach Lindsay Whalen brought in five transfers and a top-10 recruiting class in the nation (Holloway, Mara Braun, Amaya Battle and Mallory Heyer). Earlier this year, it was announced that Whalen’s contract had been extended into 2025, giving her a total of three years to develop this year’s recruits and revamp the program.

“[Whalen] had such an influential part in my decision,” Holloway said when asked about her recruitment process. “I think it’s so cool that she’s been to all the places that I hope to be at when I’m older, playing professionally, in the Olympics, all that kind of stuff.”

In high school, Holloway demonstrated that she is capable of being an activist off the court. She co-founded the Black Student Union at Eden Prairie, worked to promote youth leadership at Central Middle School and promoted racial equity as a senior officer for the Dare 2 Be Real organization.

“Being an athlete gives me such a big platform that others might not have,” Holloway said. “And I’ve always thought that if I have a platform that big, I should be using it.”
Holloway has taken no time off in using her platform as an athlete. In the previously stated Star Tribune article, she spoke on giving Black women coaches more respect.

When asked about the specifics behind this quote, Holloway mentioned the story of Texas A&M Head Coach Sydney Carter wearing her pink pants during a game against Kentucky and how others called it “unprofessional.” She said she wanted to be clear that the people criticizing Carter should be “holding everybody to the same standard” and checking their biases.

Holloway’s answer showed how engrossed she has been in women’s basketball culture. Even during the interview, she was donning the signature orange WNBA sweatshirt.

Although a possible career in the WNBA is a ways away, she said she dreams of continuing her passion for basketball after her time as a player as an assistant to Cheryl Reeve of the Minnesota Lynx or Mike Thibault of the Washington Mystics.
But as of right now, Holloway is focused on one goal: bringing Minnesota back to its glory days.

“It’d be really cool to go back to the tournament, or maybe even the Final Four … sometime in these [next] four years, I think we can really do it,” she said. “We have a really special thing going.”
Click to expand...