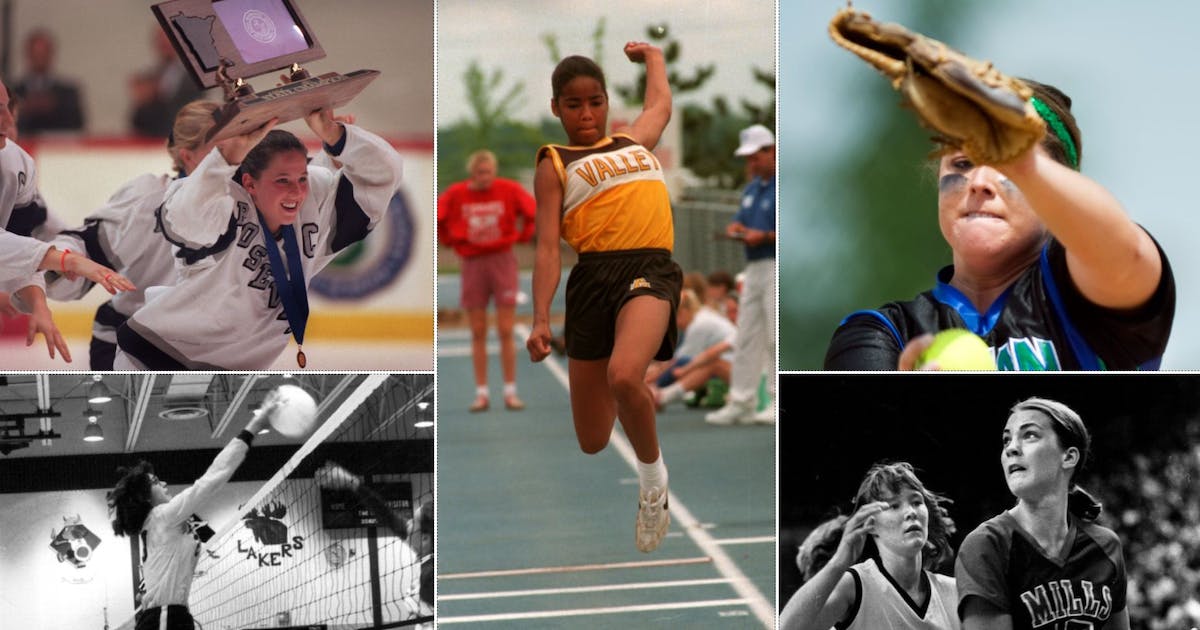 Narrowing thousands of champions and hundreds of history-makers in Minnesota high school sports down to a collection of 50 names was no easy task. But the work was worth it, as we continue to celebrate 50 years of Title IX.

Rachel Banham, Lakeville North
Few brought as much swagger and panache to the court as the south metro sharpshooter. A floor general in her high school days, her all-around play helped the Panthers to the 2010 Class 4A title. She was the Star Tribune Metro Player of the Year in 2010 and 2011.

Paige Bueckers, Hopkins
Easily the most heralded high school player to come out of Minnesota. In high school, Paige “Buckets” scored 2,877 points and led the Royals to four straight Class 4A title games, finally winning it all in 2019. She won three gold medals in international competition and was a unanimous All-America and National Player of the Year following her senior season.

Rebekah Dahlman, Braham
Hailing from a hoops-crazy family in a central Minnesota basketball hotbed, Dahlman generated offense from seemingly anywhere on the court. She obliterated the state career scoring record, becoming in 2013 (and still remaining) the only girl to top 5,000 points, finishing with 5,060.

Kay Konerza, Lester Prairie
Another in the string of girl superstars who put up big numbers in the pre-three-pointer era. Konerza scored 2,715 career points and held the record for points in a game (58, in 1982) for 36 years until it was broken by Prior Lake’s McKenna Hofschild, who scored 63 in 2018.

Kelly and Coco Miller, Rochester Mayo
The Rochester twins were bookends in the Spartans’ run of two state championships in three years, 1995 (Class 2A) and 1997 (Class 4A). So symmetrical were they that their career point totals are within a few points: Kelly with 2,151, Coco with 2,113.

Tamara Moore, Minneapolis North
As a senior, Moore was the most accomplished player in Minnesota. She led North to its first girls’ basketball state title in 1998, won the Miss Basketball award and was named a WBCA Coaches’ All-America. Now the head coach at Mesabi Range College, she’s the first woman in college basketball history to coach a men’s team.

Liz Podominick, Lakeville
She first made a splash as a basketball player, scoring 2,323 career points and helping Lakeville to state titles in 2001 and 2002. Her athleticism carried over into track and field, where she won four shot put titles and two discus titles in Class 2A
.
Kelly Skalicky, Albany
A tough-as-nails guard, she led Albany to four straight Class 1A state tournament appearances and the 1980 state title. She scored 2,704 career points. She also won the Class 1A individual golf championship in 1981.

Carlie Wagner, New Richland-Hartland-Ellendale-Geneva
When she got rolling, Wagner scored points in bunches. She broke the state tournament records for points in a game and total points in a three-game tournament three years in a row. Behind Wagner, the Panthers won Class 2A titles in 2013 and 2014.
Click to expand...