As for men’s hockey, Tommies make sense as eighth team in “new’’ CCHA in the fall of 2021, except they don’t have a right-sized arena. 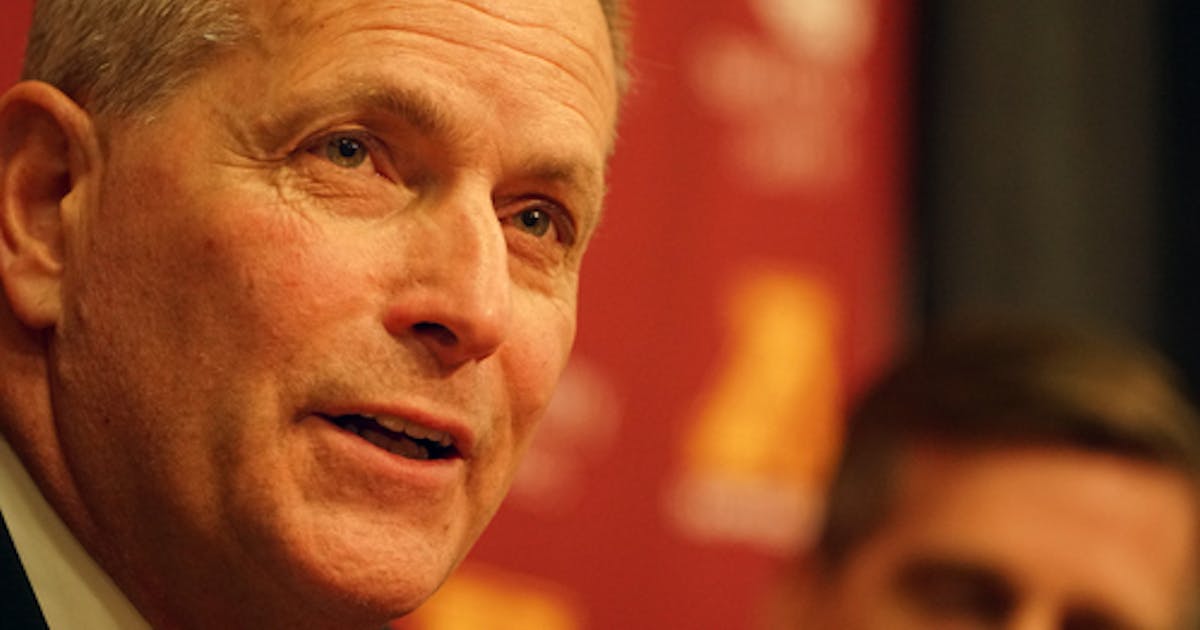 St. Thomas on Wednesday was waiting to hear if it will be allowed to move directly from NCAA Division III to Division I. If the Tommies get the OK, they have a good option for a men's hockey home.

Might Lucia have tipped his hand for a preferred school? If so, he appeared to have some “UST’’ face cards.

“They certainly would be a candidate,’’ the former Gophers men's hockey coach said. “They have a rich tradition academically and athletically. They should find out, hopefully today, which direction they’re going to go [from the Division I Council]. In past conversations with Phil [Esten, St. Thomas athletic director] that he’s pretty positive, so we’ll keep our fingers crossed. Any time we can add a Division I institution to college hockey, I think is a great day for college hockey. Hopefully, that’s going to happen here today.

“If they do come through with that announcement, they’re obviously going to be looking for a home, and that’s somebody we certainly would have an interest in, as I’m sure other conferences would as well,’’ he added. “They would be a nice candidate, and I look forward, if this goes through, being able to sit down and talk to them.’’
Click to expand...

St. Thomas on Wednesday was waiting to hear if it will be allowed to move directly from NCAA Division III to Division I. If the Tommies get the OK, they have a good option for a men's hockey home.

Oh but except this little thing that grown ups have: money!!!!!

If corporate and alumni donor want to pump in millions to make it happen, go for it. The arena they play in now won’t cut it though.

MplsGopher said:
If corporate and alumni donor want to pump in millions to make it happen, go for it.
Click to expand...

Well ya, they probably will

bonin21 said:
Well ya, they probably will
Click to expand...

Going from Augsburg level hockey to Mankato level hockey, is going to cost many millions of dollars.

Will they still play at the crackerbox St Thomas Academy Ice Arena in Mendota Heights?

Honestly, I think St Thomas would be wise to disband their hockey program entirely.

Agree, unless donors step up hugely. UST can’t afford Mankato level hockey, AND even Pioneer football, AND upgrading all other sports and facilities to Summit level. 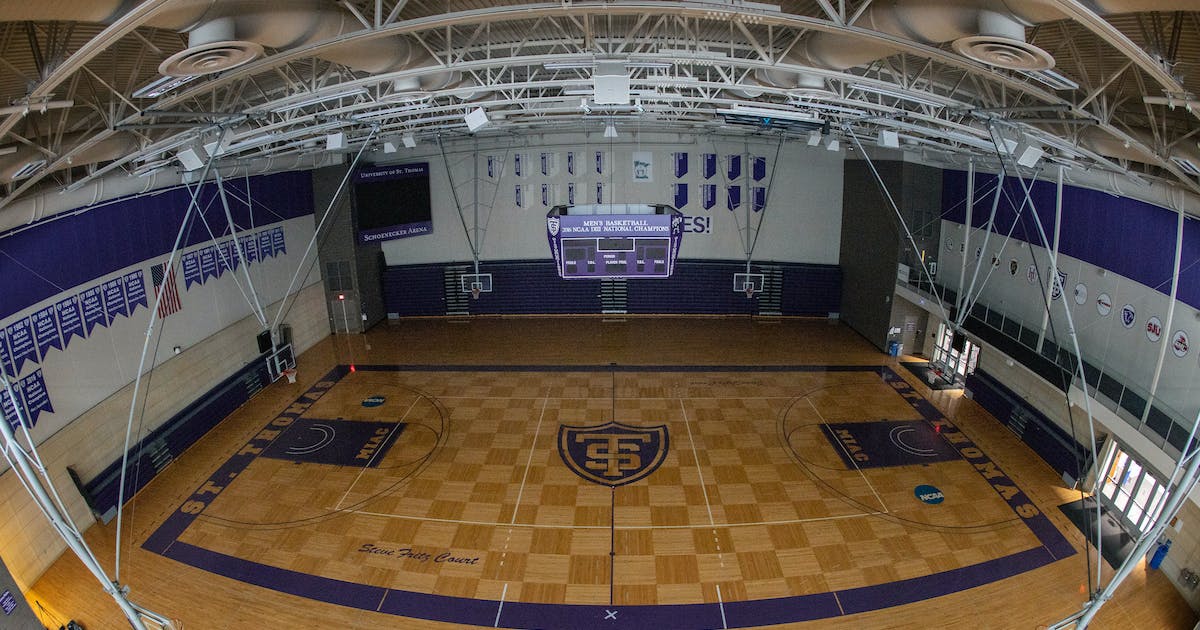 St. Thomas gets approval from NCAA to go Division I

Tommies approved by NCAA to make transition to Division I

The Tommies announced that they will join the Summit League for 19 of their 22 sports, the Pioneer Football League and the Western Collegiate Hockey Association for women's hockey. St. Thomas will also find a new conference home for Division I men's hockey.
Click to expand... 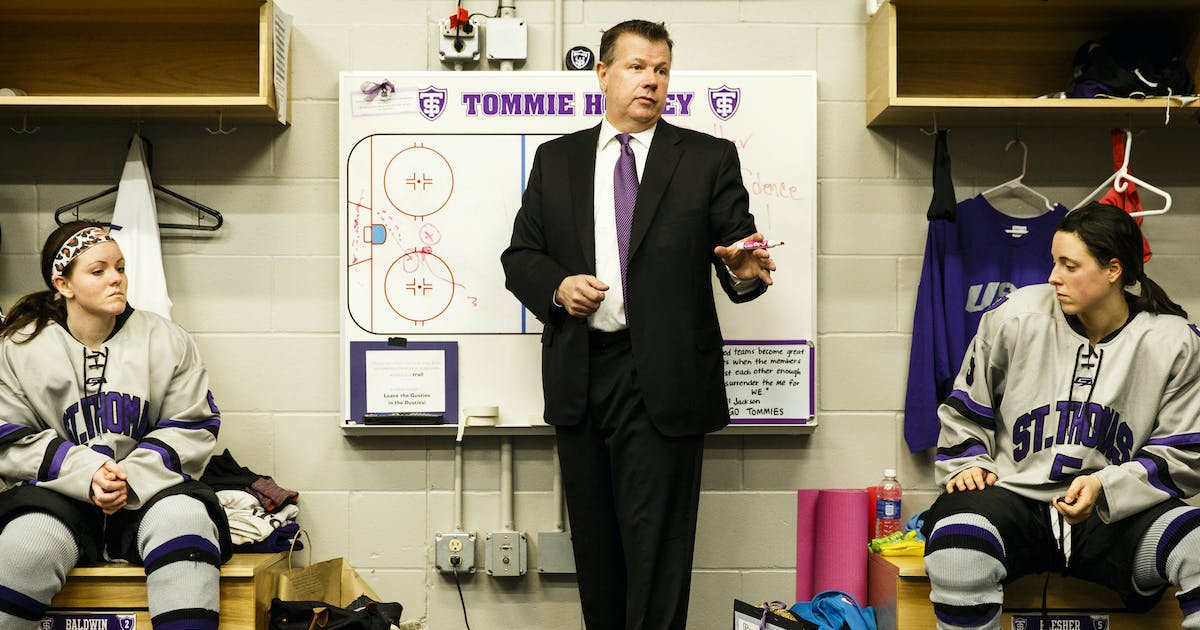 New opportunities, challenges for St. Thomas hockey in Division I

As the men's and women's programs make the transition to the highest level of college hockey, coaches Jeff Boeser and Tom Palkowski face an exciting new reality.

For Boeser and the St. Thomas men, there are unknowns. First and foremost is their conference home.

The new Central Collegiate Hockey Association, which conveniently for St. Thomas will begin play in the 2020-21 season, seems to be the most likely landing place for the Tommies. The league is made up of seven breakaway members of the WCHA, and adding St. Thomas would give the league three Minnesota teams – Minnesota State Mankato and Bemidji State are the others – along with four in Michigan and one in Ohio.

Boeser said he’ll likely alter his recruiting strategy slightly in the transition to Division I.

“The last five years, all we’ve recruited is 20-year-old freshmen,’’ said Boeser, who has a 154-80-31 record and six MIAC titles in 10 seasons at St. Thomas. “We’re probably older than the Gophers. That dynamic will probably change a little bit. We’ll probably be going after that junior in high school if he’s exceptional. Don’t get me wrong; if Casey Mittelstadt had said when he was a freshman in high school, ‘I want to go to St. Thomas,’ we would have taken him. We just didn’t get that type of student-athlete.’’

I don't envy the women.

Remember when we didn't envy Penn State's new men's team having to play in the BIG against powerhouses like us, WI, MI, etc? Things can change quickly. 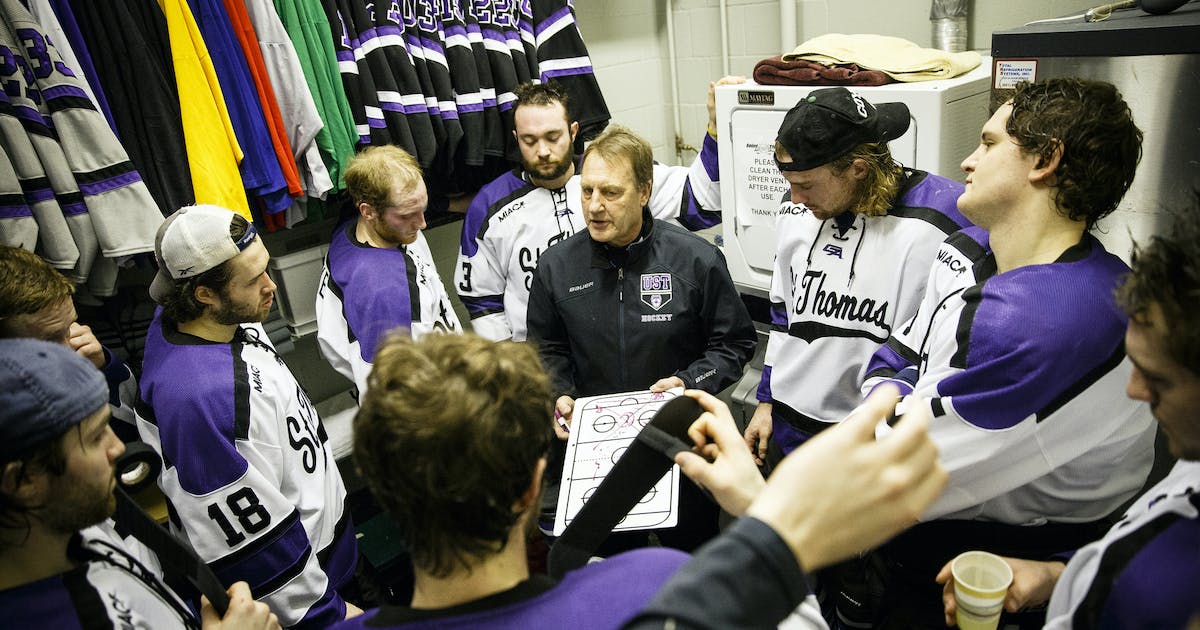 A marriage that seemed inevitable more than a year ago became reality Wednesday when the Central Collegiate Hockey Association announced that the University of St. Thomas would be the eighth member of the men's hockey conference that begins play in the 2021-22 season.

"The CCHA really is a perfect fit for St. Thomas,'' Tommies athletic director Phil Esten said. "It offers opportunities for us to build regional rivalries in the state, new rivalries in Michigan and Ohio, and compete against, and hopefully compete with, some of the most historic brands in college hockey.''
Click to expand...

MplsGopher said:
Agree, unless donors step up hugely. UST can’t afford Mankato level hockey, AND even Pioneer football, AND upgrading all other sports and facilities to Summit level.
Click to expand...

I'm guessing there are more well-heeled UST alums than Mankato. UST's endowment is much bigger as well.

salaunese said:
I'm guessing there are more well-heeled UST alums than Mankato. UST's endowment is much bigger as well.
Click to expand...

Probably a good guess. All the same, how are they going to afford all of it?

My guess is sports that will be in the Summit League will be prioritized for getting their budgets up to league averages (and ideally league leaders) as soon as possible. Basketball, volleyball (which could be a competitive mid-major level program, given how much talent is in the state), soccer, baseball, softball. These are reasonably inexpensive, as well. Biggest bang for the buck.

DI hockey and football are expensive, and niche sports unless it's major college football, which they can't do even if they wanted to sans an invitation to a G5 league. Relatively little bang for the relatively large buck, to get up to CCHA leader budgets (hence my Mankato comment) and Pioneer leader budgets.

You kind of disappeared.

#2Gopher said:
You kind of disappeared.
Click to expand...

Plan for a new on campus arena in the works. 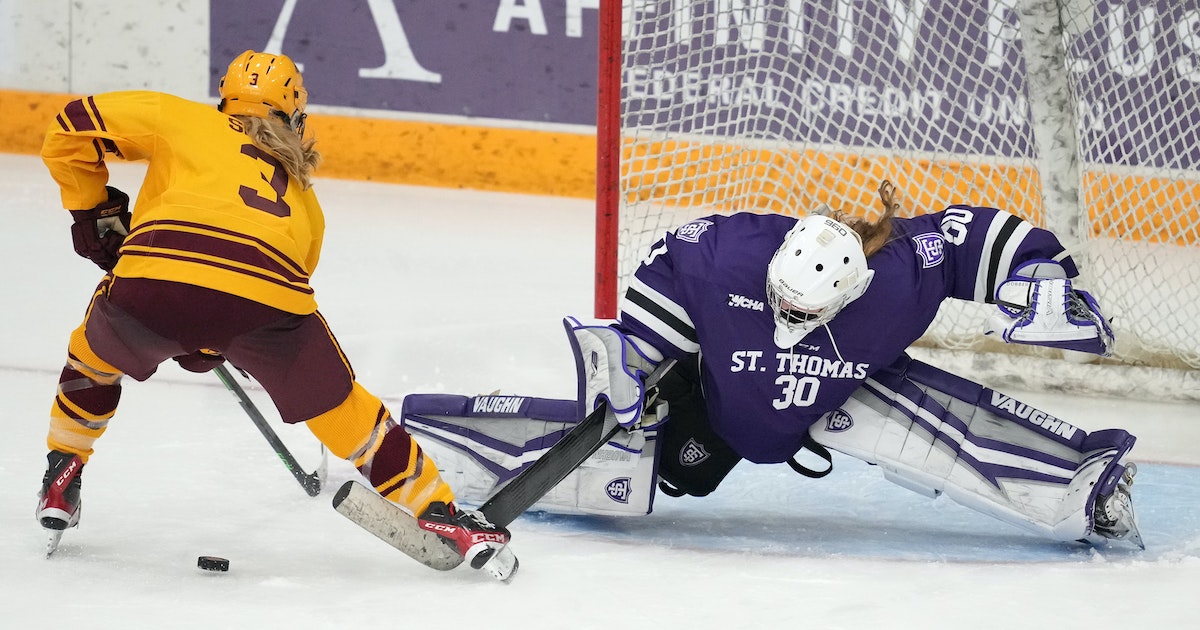 The Tommies, who had explored off-campus sites for hockey, are targeting St. Paul's Highland Bridge development for the ballfields. 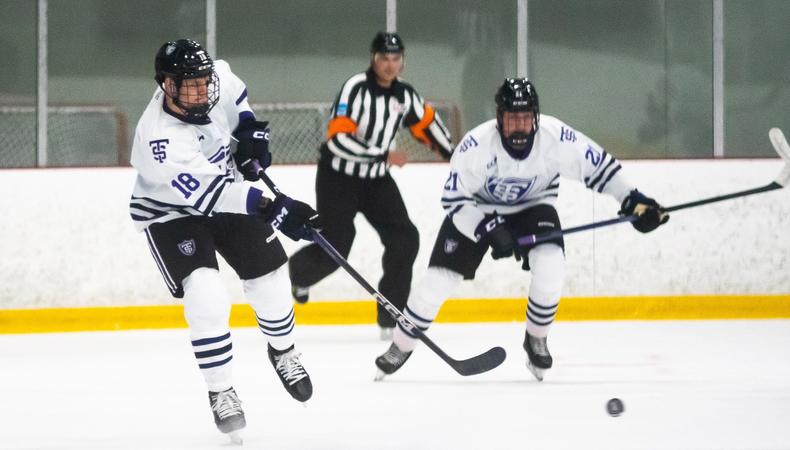 Ethan Gauer scored his first goal of the season, and second of his college career, as he buried the puck with .4 seconds left in period two to pull the Toms within 5-1. Lucas Wahlin added a third-period goal for the Toms.
Click to expand...

These must have been the return games for Penn St sticking around the Twin Cities last November after playing the Gophers. Seems like a good cost efficient idea, but these are the only Big 10 contests on the Tommies schedule this year.

UST football is the only sport of which they are not going all in. Pioneer league is "d1" non scholarship football. Most of the other teams only have football teams because they wanted to compete D1 level for a different sport. Dayton, Davidson, Valpo, etc.. all have notable basketball teams. UST has no interest (for now) in building a bigger football stadium and paying for all the football scholarships. They just want hockey and basketball to make some money and expand the school's brand. 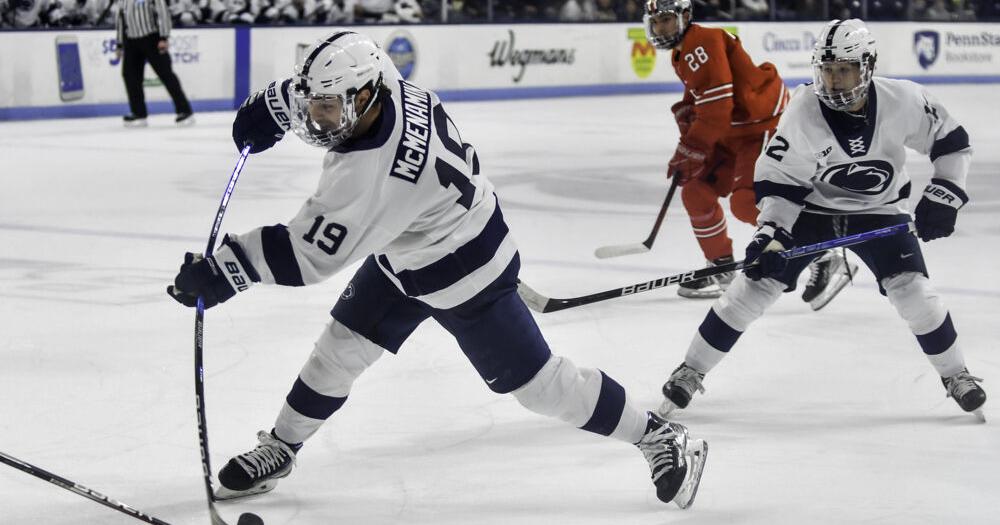 After dominating St. Thomas in a barnburner on Thursday, Penn State crutched into overtime to complete the series sweep.

After dominating St. Thomas in a barnburner on Thursday, Penn State crutched into overtime to complete the series sweep.

The Nittany Lions defeated the Tommies 3-2 to pick up their sixth win of the season and maintain their perfect record.
[...]
After 60 minutes, neither team had the advantage on the scoreboard as overtime was needed to settle the tiebreaker.

“We weren’t prepared for [overtime],” Gadowsky said. “We actually didn’t go over three-on-three, but fortunately we have a lot of veterans that have done it.”

In extra time, each unit managed dangerous opportunities in the offensive zone, but it was McMenamin who stepped up big, sending the fans at Pegula Ice Arena crazy
Click to expand...

The Lee and Penny Anderson Arena will be the new home for Tommies hockey and basketball, further elevating the university as a leading Division I national Catholic university.

The Lee and Penny Anderson Arena will be the new home for Tommies hockey and basketball, further elevating the university as a leading Division I national Catholic university.​

The single largest monetary gift ever given to a Minnesota university will bring hockey onto campus for the first time at the University of St. Thomas – and the state’s college basketball fans will have a new venue to visit as well. 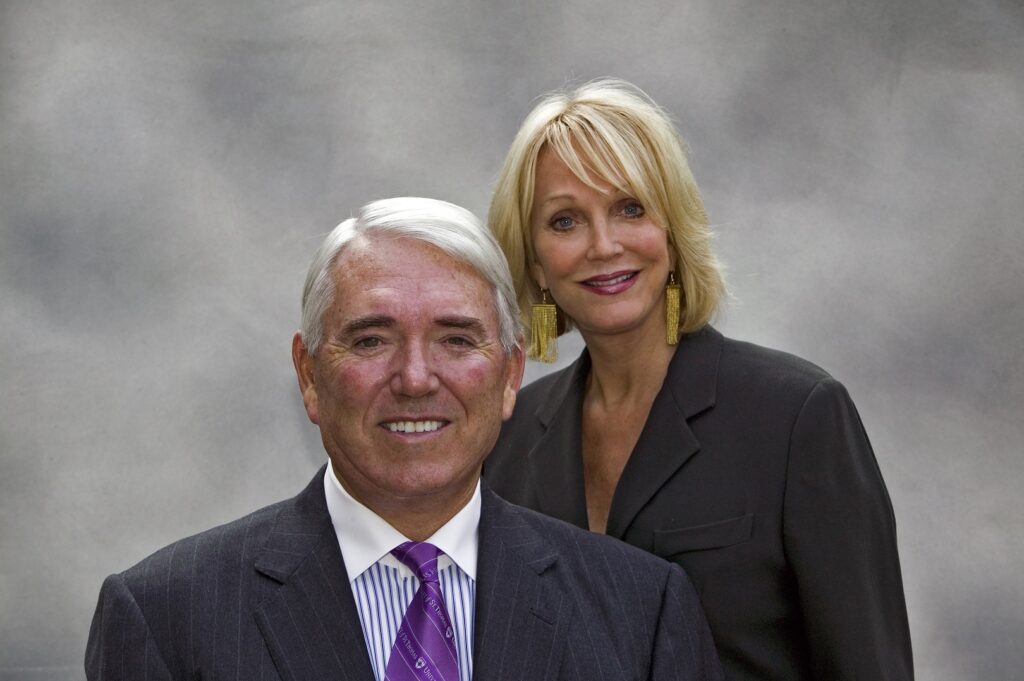 Lee and Penny Anderson. (Rob Finnigan/API Group, Inc.)
St. Thomas on Tuesday announced the $75 million lead naming gift from Lee and Penny Anderson of Naples, Florida – two long-standing benefactors of Minnesota’s largest private university – to construct a multiuse, on-campus arena in St. Paul that will be home to its Division I men’s and women’s hockey and basketball programs. The donation is one of the 10 largest known collegiate athletics gifts ever received nationally.
Designs are still being finalized for the Lee and Penny Anderson Arena, but the historic gift officially kicks off fundraising to raise $131 million for the venue on the university’s south campus. Project costs are estimated to be $175 million. Partnering with design-build specialists Ryan Companies US, Inc. and Crawford Architects, St. Thomas aims to break ground on the new facility in 2024, with a target opening of fall 2025. 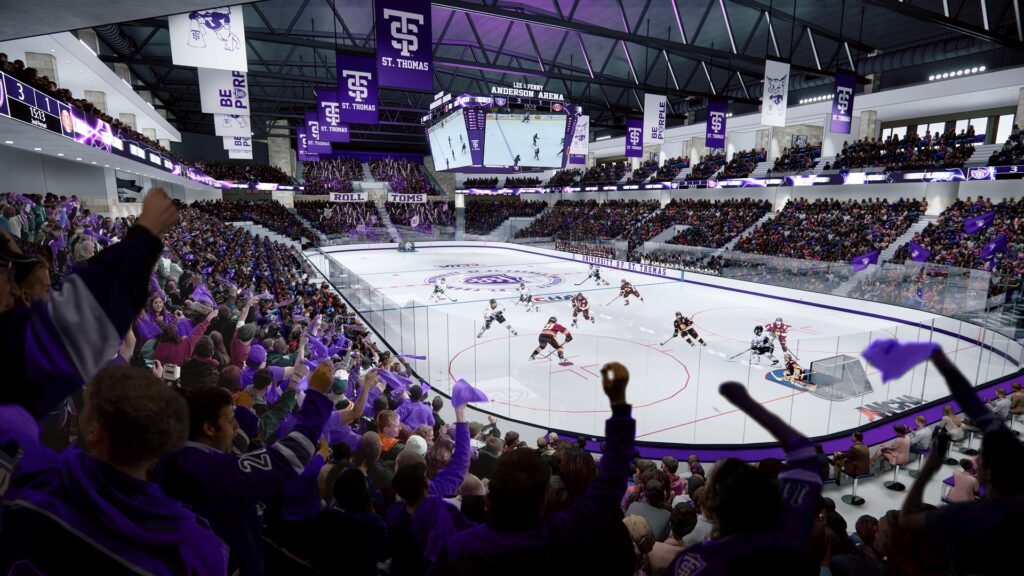 (Opens image in a lightbox dialog) 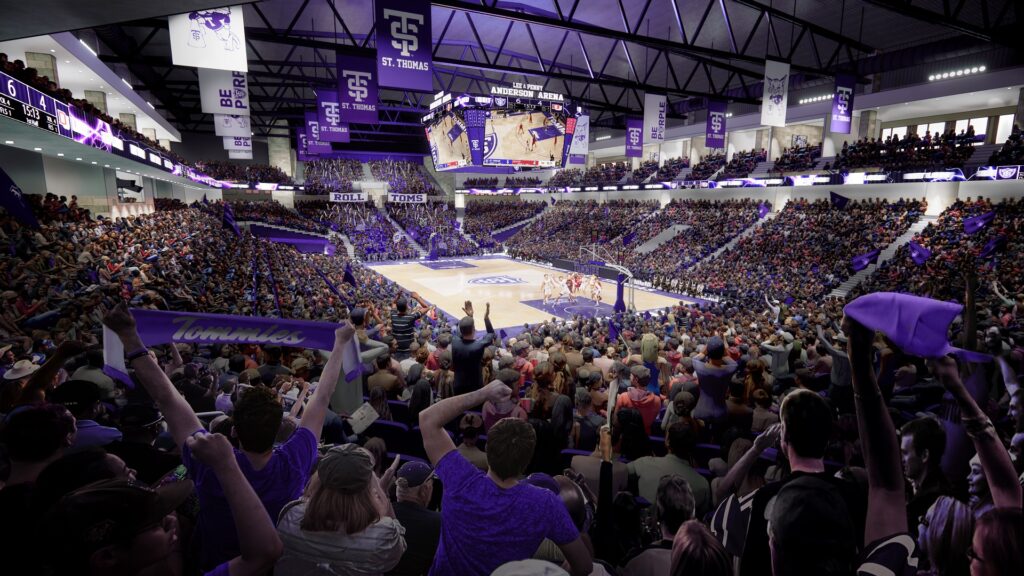 (Opens image in a lightbox dialog)
Aside from hockey and basketball games and hosting special events, the arena is being envisioned as the new home for St. Thomas commencement ceremonies, academic convocations, speakers, career fairs and other events for the university and broader community. The arena will also provide potential opportunities for St. Thomas to partner with local schools, youth sports organizations, nonprofits, businesses and other organizations. 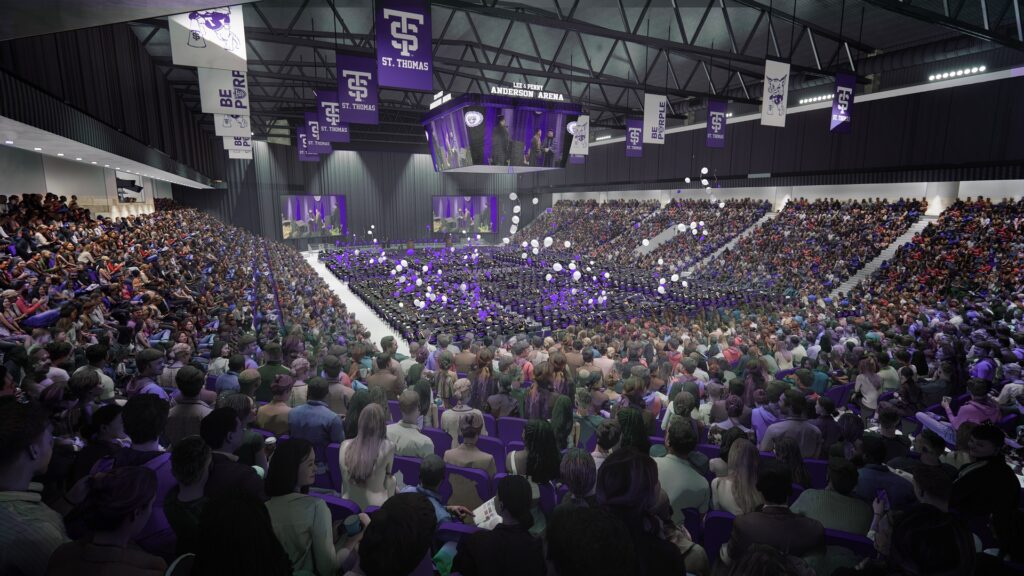 “This is about more than just hockey and basketball games – this is a gift that will be transformative for our entire St. Paul campus, enhance the experience of our students, and raise visibility for the university as a whole,” said St. Thomas President Rob Vischer. “It also creates a new community and economic asset for the Twin Cities, the state of Minnesota, and the region.”
Click to expand...

bonin21 said:
Well ya, they probably will
Click to expand...

Like I said. The UST donor base actually makes the Gopher donor base look pathetic, relatively.