Hayo was a 5 star on Scout.

Just take a deep breath, admit you were wrong, and move on. Better for your health.

Back on ignore? LOL. That's creepy. It's creepy that you had me on ignore and then you were sitting around thinking about me and decided (out of the blue) "I should pull Bob Loblaw off of ignore". I've always known you're obsessed with me, but that is some weird psycho ex-gf stuff. Just so you understand. . .it's not creepy to put people on ignore, it's not creepy to NOT put people on ignore, it's creepy to put and pull people from ignore. It's proof you're thinking about them when not reading their posts. It's weird. You really should get a job so you can stop obsessing over other men on a message board.

I have no problem admitting when I'm wrong. I do it all the time on here. I actually did it in that post you're replying to. I thought you intentionally left out in the post that Mauer was a 5 star. I was wrong, I incorrectly attributed malice when it was obvious that you were just dumb. If I embedded a tweet about something, I wouldn't embed it in a way that hid the entire reason for me embedding the tweet. So yeah, I was wrong. You weren't being malicious in your post, just stupid. My bad.

die hard gopher said:
Hayo was a 5 star on Scout.
Click to expand...

Ed McMahon had him ranked really high and couldn't stop talking about him. 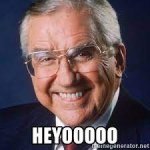 50PoundHead said:
Ed McMahon had him ranked really high and couldn't stop talking about him.

"How high was he ranked, oh Great One?"

Thought I heard Brandon Owens was a 5 star. Sorry but don't know which site rated him. Too bad his career was cut short because unlike Hayo he actually seemed to live up to the rating.
Last edited: Jan 12, 2022

Does anyone remember what rating Darrell Thompson (the Rochester Rocket!!!!) had coming out of high school? I honestly cannot recall, though I do remember him being recruited heavily by a whole crew of blue-blooded schools.