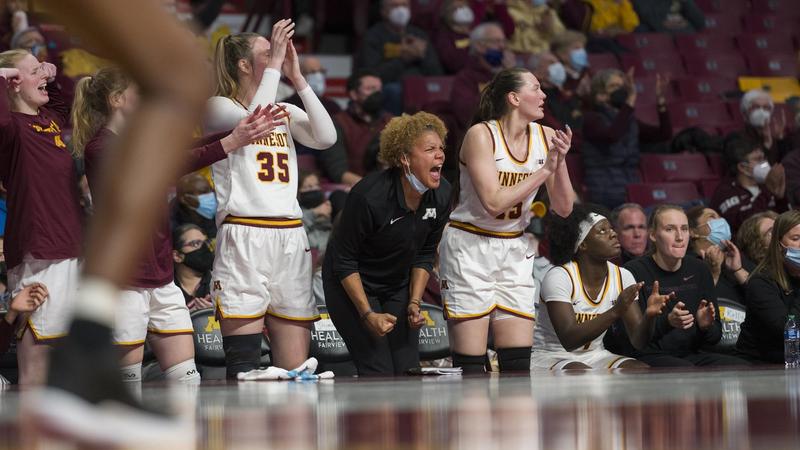 "Today I am happy to announce Shimmy Gray Miller as our Associate Head Coach," Whalen said. "With over 20 years of experience at the Division I level, her vast knowledge of the game is extremely valuable to our program. Shimmy embodies our program standards in all that she does. I am excited to see Shimmy embrace and thrive in her new role."

In her lone season at Minnesota, the Gophers reached the postseason and coached Alanna Micheaux to a Big Ten Freshman of the Week honor after a big-time performance in B1G/ACC Challenge game against North Carolina. She also coached Bailey Helgren who was named the Gophers' honoree on the Big Ten All-Sportsmanship team. Gray-Miller directly impacted the Gophers statistical improvement in a number of categories from the 2020-21 season to the 2021-22 season including field goal percentage (.402 to .407), opponent field goal percentage (.463 to .426), rebounds per game (35.95 to 36.91), blocks per game (2.5 to 3.5), turnovers committed per game (15.3 to 12.7) and turnover margin (-2.33 to -1.70).

In her role, Gray-Miller works with Minnesota's post players, sets up recruiting visits for the program and also helps prepare scouting reports and game strategies.

Last season Minnesota's post players posted 22 double figure scoring efforts with six double doubles and seven double figure rebound efforts. The team overall was fifth in the Big Ten in rebounds last season with a total of 1,218 and was also fifth in offensive rebounds with 382. As a team the Gophers were sixth in blocked shots with Helgren leading the way among post players with 23.

With 20 years of coaching experience, Gray-Miller has spent time at all five of the Power Five conferences. During her career, she has helped her teams to nine NCAA Tournament appearances, including one Sweet 16 appearance, and coached six WNBA Draft selections. Most recently prior to Minnesota Gray-Miller spent three seasons at Clemson. She helped the Tigers to two postseason appearances in her three seasons, including reaching the second round of the 2019 NCAA Tournament. Kobi Thornton, an All-ACC Second Team member, was chosen in the third round of the 2020 WNBA Draft
Click to expand...

Interest in the program has grown and soon to get even higher.