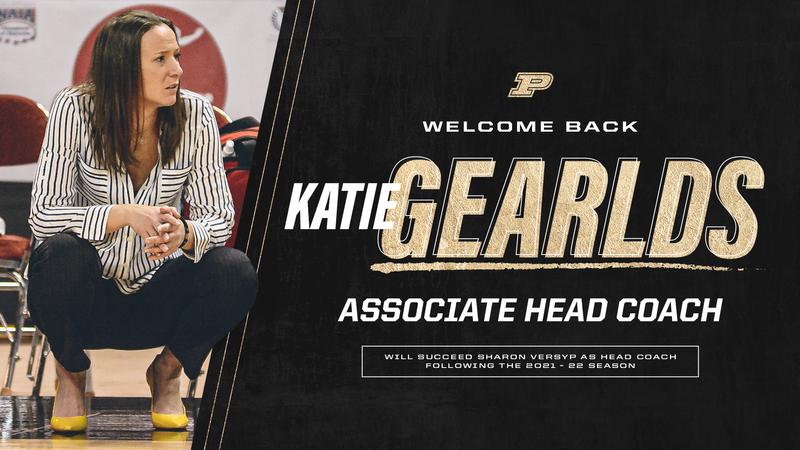 The duo will reunite on the sidelines of Mackey Arena for the first time since leading the Boilermakers to an Elite Eight appearance in 2007, Gearlds' senior season and Versyp's first campaign with the Boilermakers.

"I have been blessed to realize my dream of coaching at my alma mater," Versyp said. "It has been the honor of my life to lead the Boilermakers and be an ambassador for this great university. I have to thank Morgan Burke, Mike Bobinski, President Mitch Daniels and Nancy Cross for their constant support and for giving me the opportunity to lead Purdue.

"I am thrilled to welcome Katie back home to Purdue. Katie was one of the hardest working players I've ever had the good fortune to coach, and her character and leadership embodied everything we wanted in a student-athlete to represent our program."

Versyp's mentorship during the upcoming season will play a key role as Gearlds makes the jump from NAIA Marian to Purdue, the Big Ten and the NCAA. The succession plan will give Gearlds access and guidance from Versyp to navigate in-game coaching, the recruiting trail, administration, strategic scheduling, managing relationships within a large program and other key areas at an elite level.

The bond between Versyp and Gearlds has always been strong, dating back to that 2006-07 Elite Eight campaign. Versyp has served as a sounding board for Gearlds during her professional career and transition into coaching. Seeing Gearlds develop into one of the most dominant young coaches in the NAIA and knowing the profound passion and loyalty she has for Purdue made it an easy selection when Versyp and Purdue began vetting possible successors.

"When presented with the privilege of participating in selecting my successor, we knew without a doubt that Katie was the best person to continue the long and rich tradition of Purdue women's basketball," Versyp added. "I'm excited for the opportunity to work with Katie this next season to move our program forward and begin to write the next chapter in its history."

Gearlds spent the last eight seasons taking Marian University to unparalleled success, winning back-to-back NAIA National Championships in 2016 and 2017. She is the winningest coach in Marian history with a 228-50 record, an 82% clip.

With only five All-Americans in program history before her arrival, Gearlds mentored 12 All-America honorees, including 2021 WBCA NAIA National Player of the Year Imani Guy, as well as 28 All-Crossroads League selections.

At the conclusion of the 2020-21 campaign, Gearlds was named to the coaching staff for the 2021 USA Basketball U16 Junior National Team.

"First and foremost, I want to thank Mike Bobinski, Coach Versyp and Nancy Cross for believing in me," Gearlds said. "Honestly, it just feels like I am coming home. I am thoroughly excited for the opportunity to help put Purdue back on the national scene. I believe we will accomplish great things in the years ahead, and am looking forward to being a part of the next chapter in Purdue women's basketball history.

"Eight years ago, (Marian Athletic Director) Steve Downing took a chance on me, and we never looked back. I was afforded the biggest privilege to have the opportunity to lead this program, and I will be forever grateful. My staff, every young woman I had a chance to coach and the administration at Marian have made me exactly the coach I am today, and the love I have for all of them is endless. This is a page in my life that I am going to struggle to turn, but I'll never forget the memories we made and the family we built. They will forever be a part of me.

"When Coach reached out about returning home, it was an opportunity I could not pass up. Purdue is the next step for me, and it's a step I feel like I was born to take. I can't wait to get to West Lafayette, begin building relationships with the team and dive straight into work. It's going to be a fun ride."

Prior to her jump into coaching, Gearlds spent three seasons in the WNBA with the Seattle Storm. She was taken with the seventh overall pick in the 2007 WNBA Draft, the highest selection ever from Purdue and the 10th top-10 pick in Big Ten history.

Over three campaigns with the Storm, Gearlds shot just under 40% from the field and 37.9% from distance. She also spent time playing professionally in Spain, Greece, Portugal and Slovakia.

"We knew we wanted the next era of Purdue women's basketball to be led by someone who has had demonstrated success in coaching, both in the WNBA and in college; we were able to find all that and much more in Katie Gearlds. A proud Boilermaker, she knows what is needed to return Purdue women's basketball to a championship level and we are excited to welcome her back home to begin that work," Bobinski said. "We also want to thank Coach Versyp for her commitment to making this year of transition a successful one and are fortunate to have her and our entire women's basketball staff alongside Katie during what we expect will be an exciting 2021-22 season."

One of the most-prolific players at Purdue, Gearlds was a three-year starter for the Boilermakers during her career from 2004-07, appearing in 133 games with 100 starts. She ranks fourth in program history with 1,974 points and was the ninth fastest to join the 1,000-point club, reaching the plateau in just 80 games.

Versyp's tutelage took Gearlds to new heights as a senior for the 2006-07 season. She set the Purdue single-game record with 41 points at Wisconsin on Feb. 18, 2007, and scored 707 points to tie the single-season program record.

Even more than 15 years after her playing days ended in West Lafayette, Gearlds name is still scattered across the Purdue record book – fourth with a 14.8 scoring average for her career, four in double-figure scoring games with 102, third in field goals made, third in career 3-pointers with 238, first in single season assist-to-turnover ratio at 2.57 in 2005-06 and tied for second in that career category at 1.64.

Gearlds earned a bachelor's degree in sociology with minors in psychology and communications form Purdue in 2007.

A native of Beech Grove, Indiana, Gearlds was named the Indiana Miss Basketball in 2003. She amassed 2,521 career points, good for sixth in IHSAA history. She averaged 30.1 points, 9.4 rebounds, 5.4 assists and 5.1 steals per game to lead Beach Grove High School to the 2003 Class 3A State Championship. Her high school accolades included Nike/WBCA All-America, First Team All-State and the Gatorade Indiana Player of the Year.

"I also want to thank my family," Gearlds added. "My parents, siblings and the rest of my family and friends have always been there to have my back. The Purdue family grew quite a bit today."

Gearlds' succession after next season will keep the Boilermakers under the leadership of an alumna, following what will be the 16th year of the Sharon Versyp era.

Versyp has taken the Boilermakers to nine NCAA Tournament appearances, including a pair of Elite Eight games in 2007 and 2009, while winning four Big Ten Tournament titles.

In addition to stellar playing career for the Boilermakers in the mid-1980s with a trio of All-Big Ten nods, Versyp took over the program record for overall and Big Ten wins with 301 and 140, respectively.

The record book has been rewritten during the Versyp era with over 20 different individual season and career marks over the last 15 seasons.

Equally impressive to the on-court accolades are the team's academic achievements under Versyp's guidance. The Boilermakers have earned 71 Academic All-Big Ten honors during her tenure. Brittany Rayburn became the first Boilermaker Academic All-American since 2001, when she earned second team status as a senior, while 2009 graduate Lauren Mioton and 2021 graduate Leony Boudreau were Rhodes Scholar finalists.

Whalen and Gearlds -- one of my favorite non-Gopher B1G players ever -- will meet on the court again.

At least they hired somebody with 8 years of experience and showed some coaching acumen. 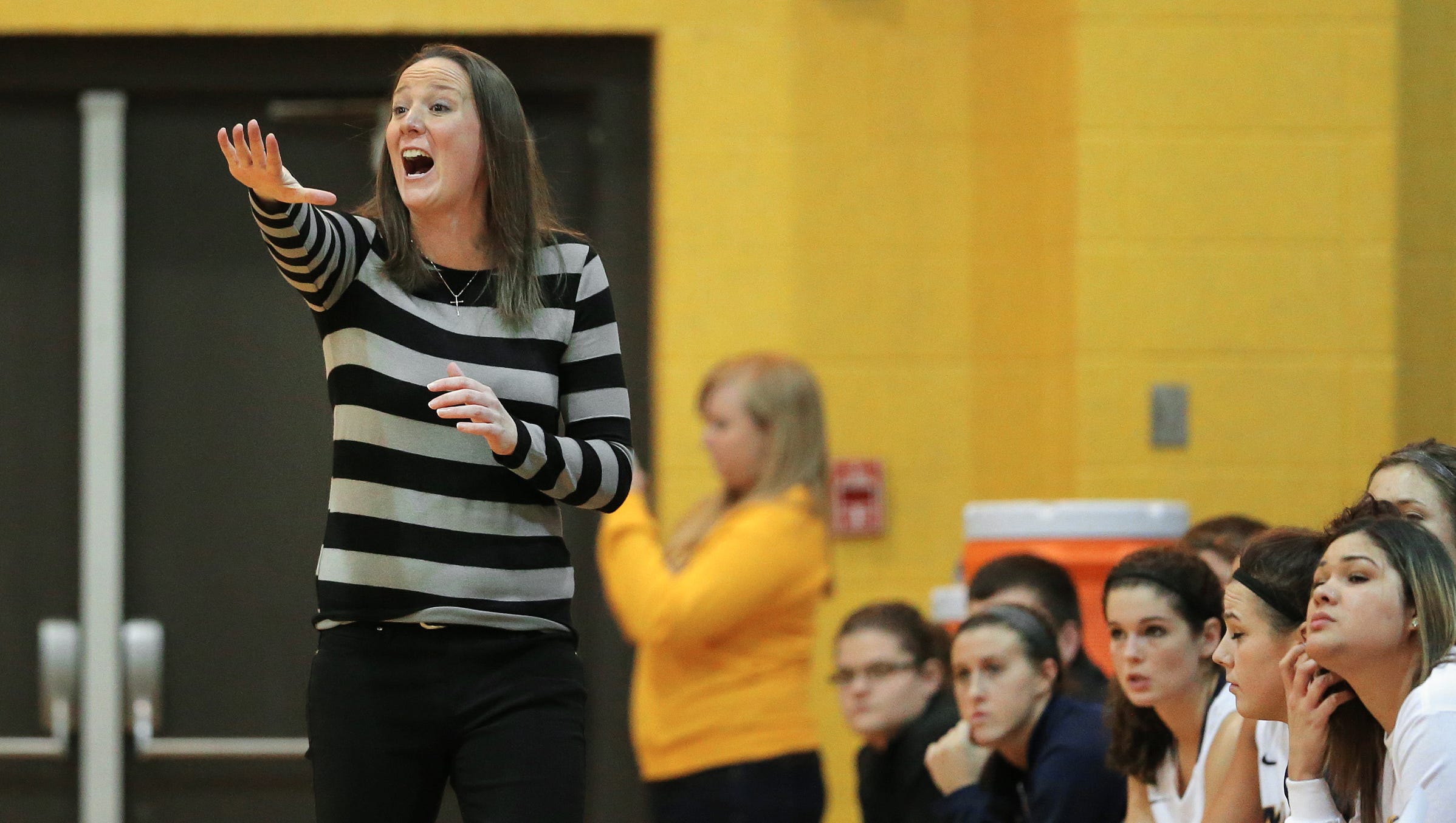 Looking for an upgrade:

Although Gearlds hasn’t coached at the NCAA Division I level, her success at Marian University in Indianapolis, an NAIA program, has been unmatched during the last eight years. She guided the Knights to two national championships in 2016 and 2017 and won 82% of her games.

But Gearlds is taking a step up in class, and it’s not all about coaching. The biggest climb will be in the recruiting department where Gearlds will need to sign elite players from the state and across the country to bring the program back to its winning ways.

At Marian, Gearlds signed players who were considered NCAA Division II or lower-level Division I players to join her program, a promising indicator of her abilities in the recruiting department.
[...]
It’s a much harder job today than it was 15 years ago with the emergence of Indiana’s program and other Big Ten teams jumping over Purdue.

This program isn’t the same when Gearlds, who was Indiana’s Miss Basketball in 2003 and led Beech Grove to a state championship. In Gearlds’ last season, the Boilermakers advanced to the Elite Eight – and did it two years later – but haven’t returned to the Sweet 16, despite playing the first two rounds at Mackey Arena in 2012 and 2014.
[...]
The program has become stale, fan apathy is more prevalent, overall interest has eroded and Versyp was never able to fully replenish the talent she inherited when she took over after spending one season at Indiana.

Gearlds’ hiring does provide a fanbase starving for success a reason to be optimistic that things will change. Gearlds will also need to inject a new offensive system into the program since that’s the direction the game has been headed for several years but the Boilermakers were always playing catch up.
Click to expand...

Should be an interesting hire. I wish her well.

It is alleged that an incident occurred after the Purdue Women's Basketball game against the University of Wisconsin during the 2018-2019 season.


Specifically, the documents allege that the coaching staff and Ms. Kix were frustrated with the performance of a freshman player.

Once the game was concluded everyone boarded the plane back home, it is alleged that after hearing someone laugh, Ms. Kix yelled at the said player, raised her hand, and knocked the player's phone out of her hand.

It is also alleged that Ms. Kix continued yelled at the said player after the altercation and teammates had to pull her away from that player.

It is further alleged that since the incident Kix and Versyp made a hostile environment for participation in the University program for the said player and the other members of the team.

We've reached out to Purdue University Athletics for further comment and they referred us to the University on this matter.

We have not heard any comment from the University just yet.

Sports 18 is actively working to confirm the accuracy of the allegations contained in the document. We will provide further updates when information comes available.
Click to expand... 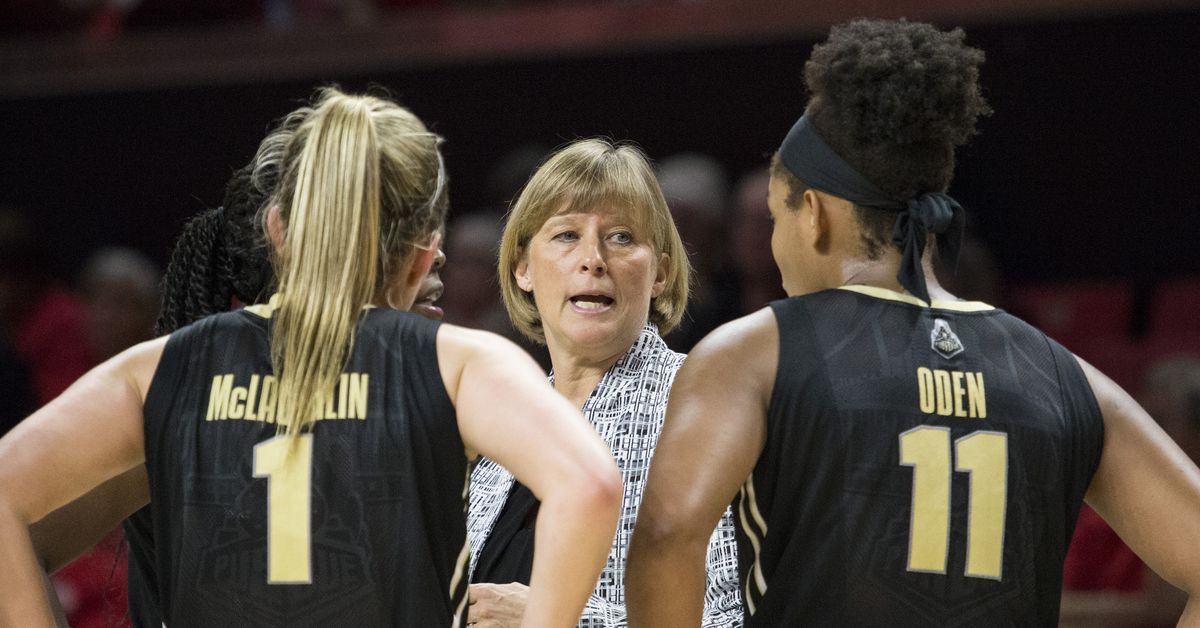 In a bit shocking fashion, Purdue Women’s Basketball Head Coach, Sharon Versyp, has decided to retire from coaching, per a release from the program.

This was earlier than expected as she was set to coach one final season this year with the Boilermakers and then hand the keys over to Katie Gearlds at season’s end. One can assume, this decision has to do with the accusations and subsequent investigation that she contributed to a “toxic and hostile” environment.
Click to expand...