As long as she can remember, there was a problem. Any time Katie Borowicz would be on her legs for a long time, they'd start to tingle. There wasn't a lot of pain, but discomfort. She would always ask her mom, 'What's going on?'"

But when she got to Minneapolis it got worse.

Borowicz is a point guard for the Gophers women's basketball team. She is, almost, a third-year freshman. So, technically, she is part of a group of high-profile freshmen expected to lift the Gophers program.

She has had a wonderful summer. "Tremendous," coach Lindsay Whalen said. "She's a coach's dream. She has no fear. She's built that way. And she speaks her mind which — as a coach, on the floor — is what you want. Last year it was tough without her.''

It was tough on everyone.

A top-100 national recruit by ESPN out of Roseau, Borowicz graduated high school early and joined the Gophers in the middle of the 2020-21 COVID-19 affected season. An interesting move; the extra year of eligibility the NCAA granted during the pandemic meant Borowicz could get a half-season in and still have four years of eligibility left. 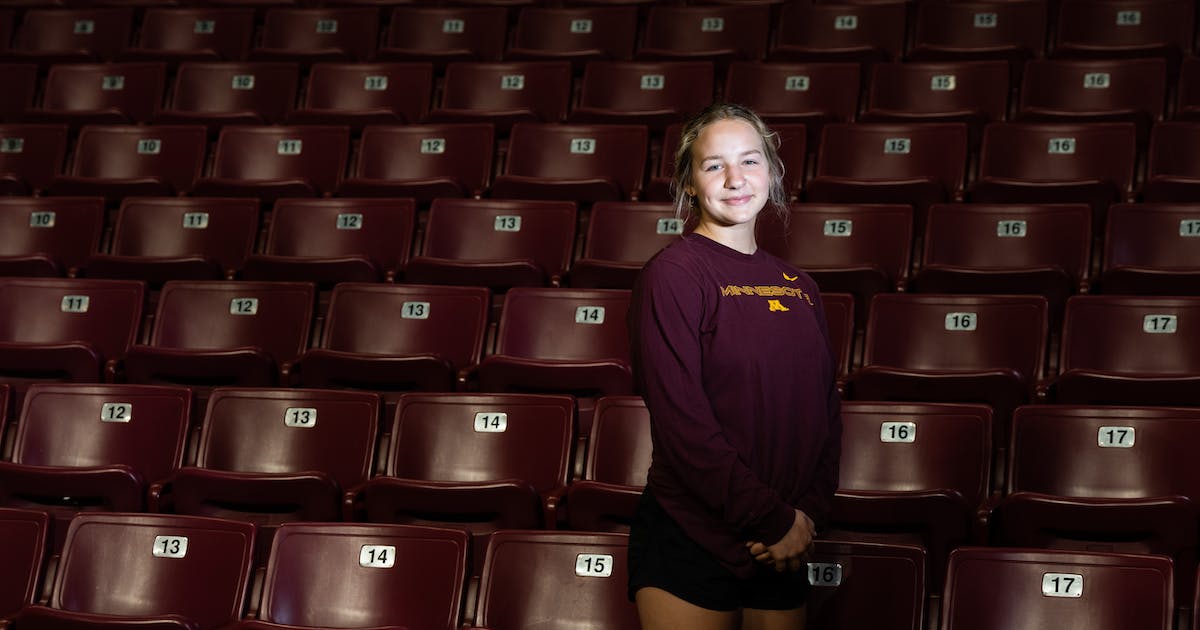 Borowicz missed last season after having surgery to relieve pressure that her brain was putting on her spine.

I remember when she left high school early but I don't follow the woman's program that close and did not know the story. Who could not root for her? This year is big for program and Lindsay. I am looking forward to the season.

Katie Borowicz is, was, will be one of the top players. 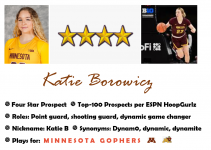 Borowicz in January, 2021 went from high school in Roseau, MN to playing in the Big Ten days later.

As she explains in this video, "I just randomly got a facetime with Coach Whey, and she just popped the question, like, 'Hey, do you think it'd be crazy if you'ld like to graduate early and come play with the Gophers?' I was like - oh my goodness! -- is that a thing?"

She was soon on the court playing Big Ten basketball.

Katie B explains further in this video, "I was sitting on the bench and they were like, 'Katie go in.'"

Lindsay Whalen: "This week she was probably going to be playing Thief River Falls or Warroad or East Grand Forks, and here you are against Penn State and Maryland [Big Ten]. Good luck. We tried to prepare her as best as we could [grin]. She did great."

And she did. Against Maryland on just 4 minutes she earned 8 points and 1 assist, just her second game. She scored two points briefly appearing in her first game action.

Imagine going into Christmas break as a high schooler and starting the new year as college basketball player. That's what happened to Gopher freshman Katie Borowicz.

I think there's hope for this team. Whalen is getting enough talent.

I'm concerned about the coaching and culture. Can Whalen fix that?

TruthSeeker said:
I think there's hope for this team. Whalen is getting enough talent.

I'm concerned about the coaching and culture. Can Whalen fix that?

Culture is the reason I was not overly bummed with the transfers. I think there needed to be a fresh start post Pitts for a complete “buy in” to Whalen. I think this group is all in to what culture Whalen is trying. I’m more concerned about defenses

Yeah defense has definitely been an issue but this group has me cautiously optimistic.

I love her game. I say this as a compliment, she is the kind of player that annoys the hell out of you if she is on any other team. The Gophers need a bit more of that kind of energy.