Result of sign and trade deal with Conn. Sun 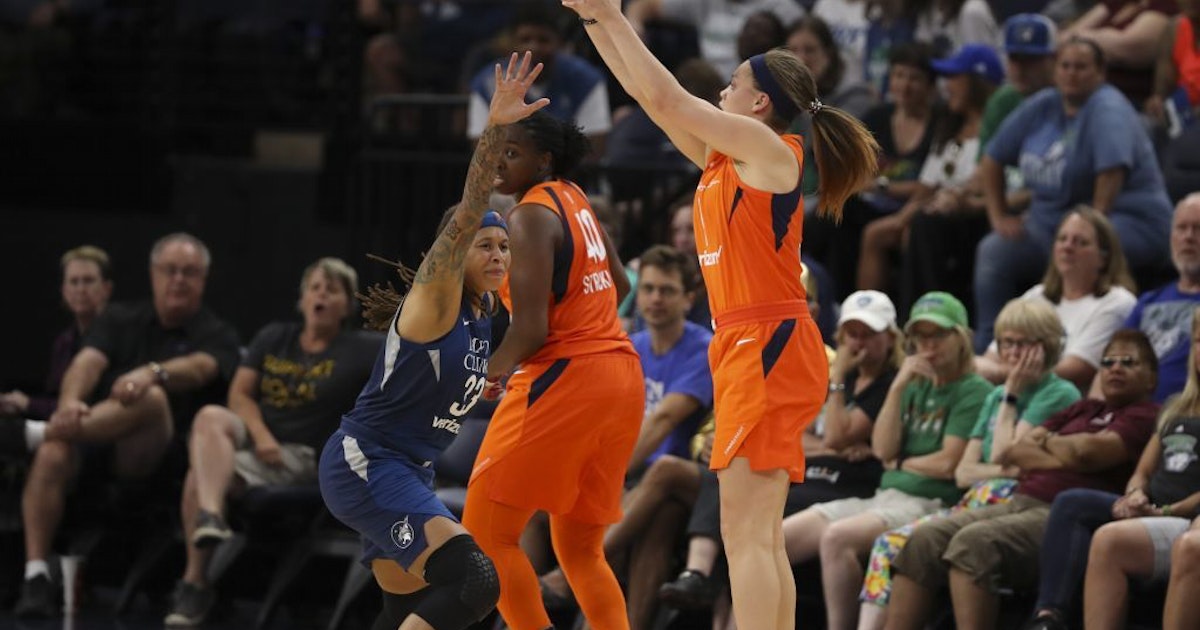 After four years of coming off the bench for the Connecticut Sun, Lynx coach Cheryl Reeve sees an expanded role for Rachel Banham in Minnesota. "The opportunity is there," Banham said.

The Lynx on Tuesday announced they have acquired former Lakeville North and Gophers women’s basketball standout Rachel Banham in a sign-and-trade deal with Connecticut. The deal includes a 2021 second-round pick going to the Sun.

“We are excited to welcome Rachel home to Minnesota,” Lynx coach and GM Cheryl Reeve said. “ Her ability to shoot the ball is something we valued during this process and we look forward to having her in a Lynx uniform this season and beyond.”
Click to expand...

Will Rachel trend the same trajectory that Lindsay took after returning from the Sun to the Lynx?

Literally no one else has ever had that trajectory.

Whether she starts or comes off the bench, Rachel will contribute more here than she did in CT. This is a great opportunity for her. Hope she runs with it.

Cool to have her back in state. But I doubt RB will be as instrumental in any future Lynx championships. Lindsay was a crucial player in Suns' championships prior to coming home to help lead the Lynx. Banham hasn't been that type of WNBA contributor so far in her professional career.

MennoSota said:
Will Rachel trend the same trajectory that Lindsay took after returning from the Sun to the Lynx?
Click to expand...

The trajectory after the draft is not nearly the same.

Here is an interview with Rachel on the Gophers Only podcast on her move to the Lynx https://anchor.fm/gophersonly/episo...-the-hometown-Minnesota-Lynx-eb3acn/a-a1j4qe2

I've seen her @ a couple of Gopher games and am happy she is returning to MN. I hope she gets rejuvenated here and finds that sweet shot . CR did say they wanted her for her outside shooting. I wondered as I watch her play limited minutes for the Sun if her injuries have impacted her game ?

GringaGopher said:
I've seen her @ a couple of Gopher games and am happy she is returning to MN. I hope she gets rejuvenated here and finds that sweet shot . CR did say they wanted her for her outside shooting. I wondered as I watch her play limited minutes for the Sun if her injuries have impacted her game ?
Click to expand...

> I wondered as I watch her play limited minutes for the Sun if her injuries have impacted her game ?

Yes, I think her knees (and events related to them) have been the biggest thing holding back her WNBA career thus far.

In her rookie year, I suspected she was having knee issues, but nothing was said initially. That year she was shooting threes at the same percentage as Dianna Taurasi - but did not show up on the WNBA list of highest-percentage three-point shooters since she didn't have sufficient shots to meet their minimum requirements. But by any standard, she was shooting good.

Later it was confirmed that she had knee issues and they shut down her season early so she could have surgery. At that time, Curt Miller praised her for her contribution, saying she was playing hurt but without complaint.

Of course, coach Curt Miller had to bring in someone to fill that hole - namely, Courtney Williams. Courtney turned out to be a dazzling stop-and-pop jump shooter (specializing in the 13-17 foot jump shot) - but not a three-point shooter to speak of.

When Rachel came back after rehab, she was essentially now third on the depth chart for shooting guard, behind the starter and Williams - but she got some (not huge) amount of playing time. Due to injuries or illnesses she started a couple times.

Then there was this mysterious intra-team inter-guard cat fight involving the starting SG (but not Rachel), and the starting SG was traded - moving Williams up to starting SG and Rachel up to 2nd SG on the depth chart. With the trade they acquired Layshia Clarendon, but she's more of a PG.

In the off-season (playing overseas), Courtney Williams all of a sudden learned to shoot the three - and quite well actually. In fact, last year she ranked right up there with some of the top three-point shooters in the WNBA. Then also, last year the Sun acquired rookie Natisha Hiedeman, who is just a lights-out three-point shooter. She shot better than Rachel from deep last year.
So from that point of view, it makes some sense that Miller could be talked into trading Rachel - since they had (and still have) Hiedeman.

Of course, from the Lynx point of view, bringing Rachel home is like money in the bank. She translates directly into ticket sales, for one t thing. Rachel is also well-loved among the Connecticut Sun fans. It is rumored that she holds the WNBA record for photo-bombing the referees.

Even though her three-point shooting percentage was down a bit last year, there's every reason she should thrive back home among her fans and on the Lynx. As noted earlier, she hasn't had the transformative impact on the Sun or the WNBA that Lindsay Whalen did - and you can probably blame her knees as much as any factor for that. Don't necessarily expect her to start for the Lynx - her role may be more on the order of a shooter that the opponent has to respect, who can make threes by the bucketful if you don't cover her, so she'll make a few of those but perhaps more importantly, open up the paint for the rest of the Lynx to go to work.

By the way, the Sun's roster has been juggled quite a bit - it looks like Courtney Williams stock has been rising with her contribution to the Sun playoff effort last year - such that they weren't able to afford her, perhaps, or, after checking, apparently she wanted to be traded (or maybe not according to her tweet). A quick google https://www.espn.com/wnba/story/_/id/28737240/dream-acquire-sun-courtney-williams-three-team-trade shows that Williams was just this-week traded to the Atlanta Dream in a complex three-team trade that also sent Hopkins' Nia Coffey to the Mercury. Speaking of the latter, somehow the Sun ended up with the Mercury's DeWanna Bonner as well - so the Sun will still be competitive (although one wonders whether Miller knew, at the time he traded-away Rachel, that Williams was going to insist on departing - athough perhaps Briann January is filling their SG hole).

Thanks for posting this interview. Love that she is dribbling in her apartment and that she found an outdoor hoop !