Prayers Go Out to the Motzko Family

Just awful. A parents worst nightmare. Prayers up for the Motzko Family.

Terrible tragedy. Hopefully others will learn from it.

I like to show off to the nephew’s friends but I’ll likely pull back a bit now. Awful.

everybody knows my name

"Heartbreaking" is usually a trite expression, but I'm sitting here at my desk with tears. Oh gosh, imagine losing a son that way.

How about an update on the driver? Toxicology reports still not in?

Spaulding!No! said:
How about an update on the driver? Toxicology reports still not in?
Click to expand...

Well, they are in and it is not good for Jackie blue. Double the limit. He is lawyered up and ready to blame a auto malfunction. Interesting

Spaulding!No! said:
Well, they are in and it is not good for Jackie blue. Double the limit. He is lawyered up and ready to blame a auto malfunction. Interesting
Click to expand...

Where did you read/hear that? The Star Trib article today said he did not have a lawyer on record, at least as of then....and no mention of him claiming mechanical issues

In late July, University of Minnesota men's hockey coach Bob Motzko and his wife, Shelley, lost their 20-year-old Mack in a car crash along with 24-year-old Sam Schuneman, whose deepening relationship with their daughter, Ella, appeared to be headed for marriage, a happy union that would bind the families for a lifetime.

Instead the Motzkos and Schuneman's parents, Tom and Yvonne, are united in the unbearable loss of their sons and anger at a stranger who, according to charges, drove with a blood alcohol level more than twice the legal limit at speeds approaching 100 miles per hour on a winding road near his gated $6 million Orono mansion.

"This was murder," Bob Motzko said.

"Absolutely," Tom Schueneman said. "These weren't two reckless kids who were out on some joy ride."

The Motzkos and the Schunemans spoke publicly for the first time since the crash in an interview with the Star Tribune at the downtown Minneapolis offices of their civil lawyers, Robert Bennett and Phil Sieff. Their grief is excruciatingly raw, compounded by disbelief that their sons' lives ended after a brief ride with a reckless stranger.

Somehow they ended up back at the home of 51-year-old James D. Blue on North Shore Drive. The parents said the young men were probably curious and gawking. They were seen playing basketball in the driveway until Blue wanted to show off his 2017 Bentley Flying Spur.

Blue was thrown from the vehicle and survived. He was charged Monday in Hennepin County with four counts of criminal vehicular homicide.

This drunk as a skunk motherfucker doesn't wear a seatbelt, drives over 90 on curvy lake roads, flies off the road into trees, and gets thrown from the car. And he lives while the kids die.


Fucking bastard. I hope he gets everything that's coming to him.

Here the bastard murderer is, in all his absurdly dyed hair glory (picture published today in the StarTribune): 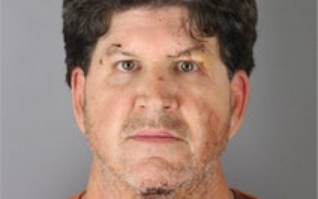 Seems he was willing to pay more bail money in order that he wouldn't be subjected to alcohol testing.

Hope he loses every cent of wealth he's acquired, and spends every last day he has in prison.

An Orono man accused of killing two passengers by driving drunk at nearly 100 miles an hour on July 24 appeared in Hennepin County District Court on Tuesday for the first time after posting $500,000 cash bail.

James D. Blue, 51, wearing a dark suit coat, light blue shirt and an orange tie, appeared via the internet and did not speak, nor did he enter a plea in the deaths of Mack Motzko, 20, and Sam Schuneman, 24. Blue sat silently next to his lawyer, Fred Bruno, who argued against setting conditions on bail given that the defendant had posted the full amount in cash.

Initially, District Judge Regina Chu said Blue would be required to abstain from using nonprescription drugs or alcohol, wear an alcohol sensing monitor, be subject to random drug and alcohol testing and be required to check in with his court monitor.

This playboy will be out in 10 years and have most of his cash.

Spaulding!No! said:
This playboy will be out in 10 years and have most of his cash.
Click to expand...

10? Make it <3 and yes he will have most if not all his cash. I'm sure he had a huge umbrella liability policy and the carrier will pay their limits in exchange for a release against personal assets.

LesBolstad said:
10? Make it <3 and yes he will have most if not all his cash. I'm sure he had a huge umbrella liability policy and the carrier will pay their limits in exchange for a release against personal assets.
Click to expand...

Although I hope you're not right, you probably are. Only hope is that no umbrella policy comes close to covering the damages the jury awards.

Why should he not get the maximum prison sentence?? He murdered two young men who had their whole lives ahead of them, and stole them away from their families.

25 years would be right

MplsGopher said:
Why should he not get the maximum prison sentence?? He murdered two young men who had their whole lives ahead of them, and stole them away from their families.

25 years would be right

Fully agree but they filed vehicular homicide not 3rd degree. Playboy is going to jail but he’ll be buyin minors drinks at a FL bar soon enough.

Hopefully the families and the public appeal to Ellison or whomever to take over the prosecution and upgrade the charges.

I'll preface this by saying that I have no knowledge of the facts of this case or the defendant other than what has been reported in the media. I have no idea whether Blue has $5M or $500M or whether his assets are held in his name. I don't know how much insurance coverage he has or whether he has any criminal record. That all said, the biggest risk for him or any wealthy defendant in a civil action is the potential for damages that either exceed or are not covered by insurance. In this case, presuming that he is "adequately" insured, his risk on the civil side is the exposure to a claim for punitive damages. Such a claim requires "clear and convincing evidence that the acts of the defendant show deliberate disregard for the rights or safety of others." This language is from Minn. Stat. 549.20 which outlines the requirements for such a claim.

This is problematic for a civil defendant like Blue both because a jury finding that the standard for punitive damages is met can award huge sums and because they are not covered by insurance in most instances (including this one) under Minnesota law.

I hope James Blue gets back on the road with Smart Start. Barreiro says to use smartstartmn.com

To be clear when this goes to civil court he will act like he is in debt on everything and is actually worth zero zip nada. Anyone who has experience in a certain type of court understand show money simply disappears..

The Orono man charged in the crash that killed two young men, including the son of the University of Minnesota men's hockey coach, was charged Thursday with two murder counts in addition to four previous counts of negligent and drunken driving.

James D. Blue, 51, was charged in Hennepin County District Court with two counts of third-degree murder in the deaths of Mack Motzko and Sam Schuneman, who were passengers in the Bentley that Blue is alleged to have driven at up to 99 miles per hour before crashing into a wooded area.

Third-degree murder is characterized as perpetrating an eminently dangerous act and evincing a depraved mind. It carries a sentence of up to 25 years, which is more than double the 10-year term of the other charges Blue faces. Prosecutors also already have filed notice with the court that they will seek a longer than normal sentence for Blue because of the nature of the alleged crime.

Spaulding!No! said:
Well, they are in and it is not good for Jackie blue. Double the limit. He is lawyered up and ready to blame a auto malfunction. Interesting
Click to expand...