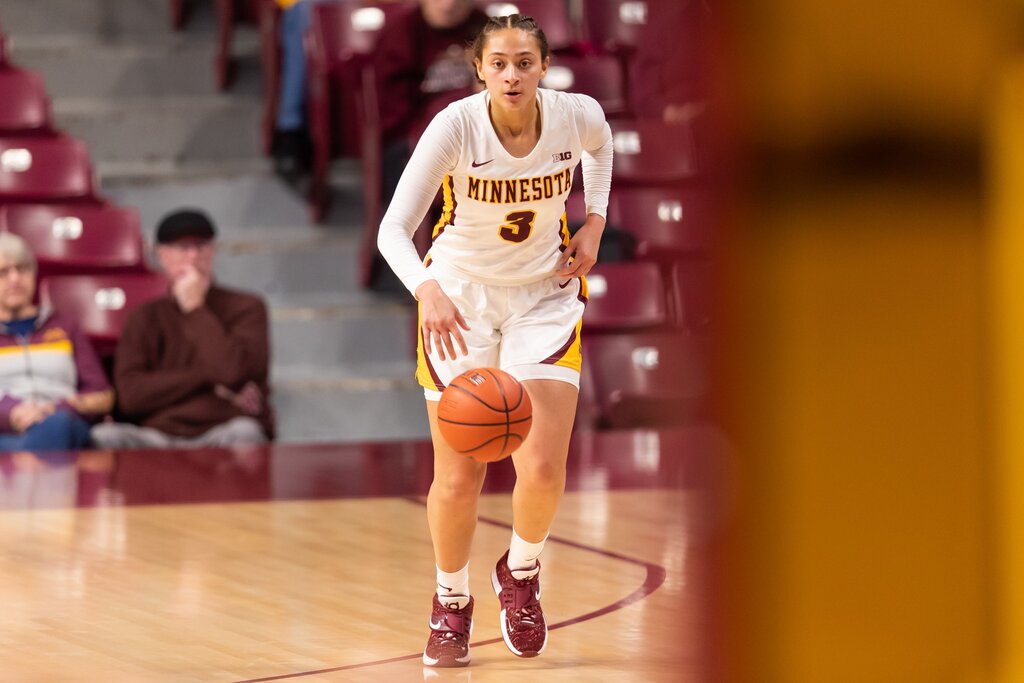 Amaya Battle at first glance seemingly has the best of worlds as a first-year college student: close to home and family, among other things.

There are approximately 100 African American and other student-athletes of color this school year at the University of Minnesota. In an occasional series throughout the school year and sports year, the MSR will highlight many of these players. This week: Gopher freshman Amaya Battle

Amaya Battle at first glance seemingly has the best of worlds as a first-year college student: close to home and family, among other things.

“It’s definitely important because there’s times where I’ll just go home for a couple of hours because I can, and it’s nice to have that, people who have helped me on and off the court grow as a person and player. I can just swing by, give them a call and really see them,” admitted the 5-11 guard from Hopkins who starred at Hopkins High School.


Furthermore, Battle, Braun and Heyer join redshirt frosh Katie Borowicz and soph Rose Micheaux as Minnesota’s current starting lineup with an average age of 19 years and four months. The Gophers are the only Big Ten team this season to start four freshmen thus far. Also, almost 64 percent of its scoring comes from this group.

Battle told us a couple of weeks ago that the mental part of playing college ball has been the hardest adjustment for her. “I got through that by definitely relying on my dad, relying on some close ones in my circle, and talking with Coach Whay [Whalen]. It’s also just continuing to keep pushing through.”

The 2022 Minnesota Miss Basketball, Battle’s athletic prowess is among the state’s best, especially for a Gopher recruit. She’s a four-star recruit, the 10th best point guard in the country, a two-time All-Stater with a state AAU title and twice a national championship, All-Conference and a section championship every year at Hopkins (2017-22).


“We actually live on the same floor,” said Battle of her brother, who’s a junior. “Having him there has been nice because he’s right there. I don’t have to call him. I can just go hang out with him if I need a break.”

Also, her dad is always a phone call away. “He’ll give me advice, even on game day, texting me,” she said proudly. “Me and my dad are really tight so he knows me, tells me what I need to hear. And I always appreciate that.”

And don’t forget her teammates-roommates Braun, Heyer and Holloway, who’s out this season with an injury.

“Prior to coming here,” said Battle, “we all just knew each other just from playing each other for four years in high school and AAU. We all had this same idea of what we wanted to accomplish here.

“I love my roommates,” Battle said. “They love me. We just have a really good bond. It’s a really good connection that we all have with each other, and I really enjoy it.”


As the second semester is starting, Battle said she’s awfully glad that the fall semester is over and done with. “I want to major in psychology and minor in Spanish, and with that I want to possibly go into sport psychology,” she surmised.

But she added her first taste of taking finals “was not what I expected—finals were definitely hard. But I was able to get through it. I just found my own study method.
Click to expand...