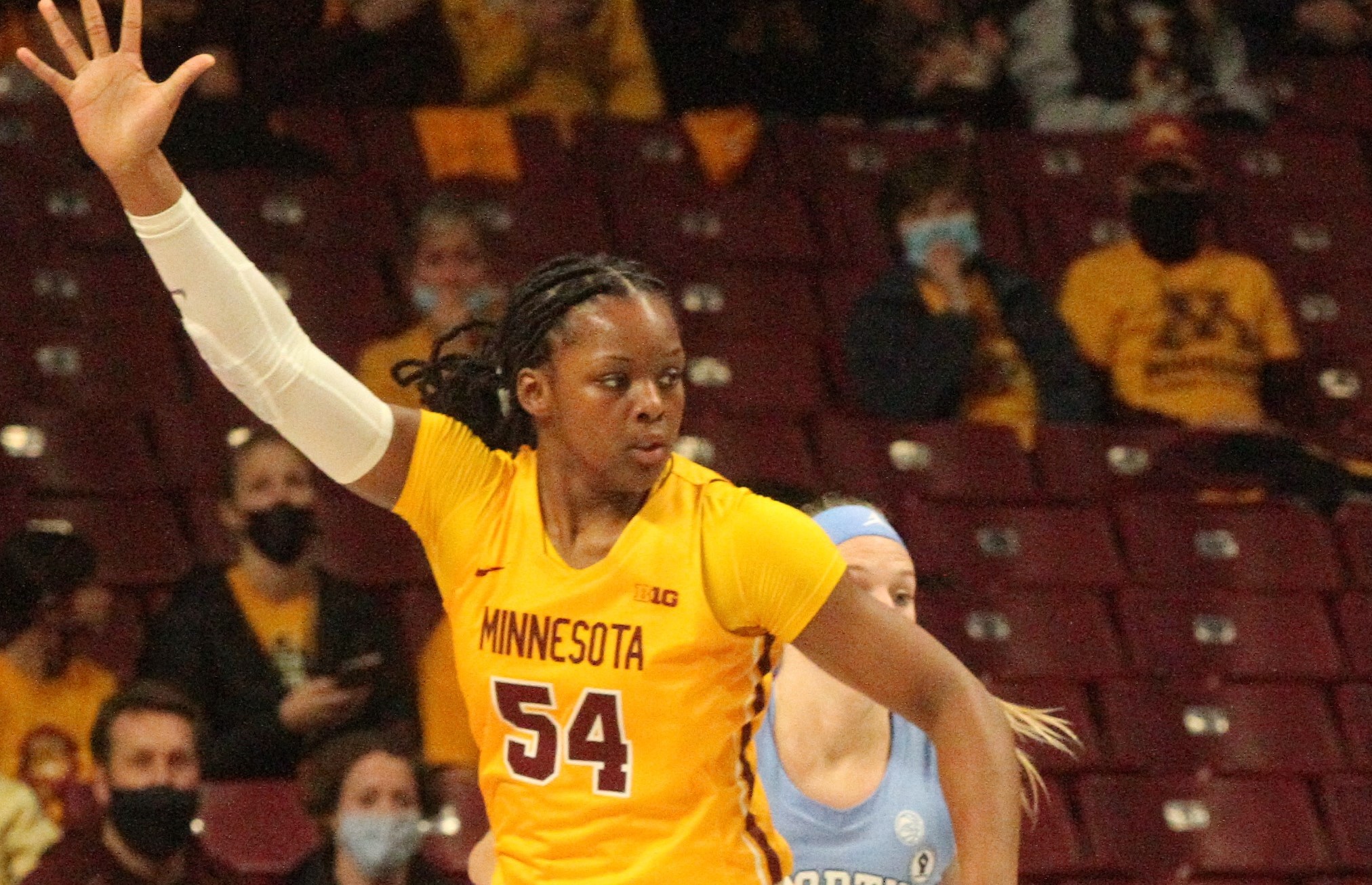 Before this season, after a practice, Minnesota WBB Coach Lindsay Whalen asked this observing reporter my first impression of freshman forward Alanna Rose Micheaux. You could see her 6’-2” physicalness, and Whalen, high on her overall toughness, then predicted that Micheaux will before long see plenty of court time.

Micheaux made her collegiate debut at Arizona State Nov. 12, grabbing two rebounds in almost four minutes in the Gophers’ second game of the season. Since then, she is averaging just under 14 minutes a contest.

“I couldn’t have done it without the team,” declared Micheaux after her breakout 23-point, seven-boards in a 25-minute performance Dec. 1 at home against North Carolina. She missed only two shots in 10 tries and later earned Big Ten Freshman of the Week, the first for the Gophers since Jasmine Powell in 2019-20, who won the award twice that season.

Sadly, some local reporters after her breakout game virtually put Micheaux among the Gopher greats, something both she, Whalen, and this reporter quickly dismissed as hyperbole.

“She’s had some really good games,” noted Whalen last week after a practice. Now in Big Ten play, the Wayne, Mich. forward will be challenged going up against the conference’s best frontcourt players. “It’s going to be a big-time challenge,” said the coach, “so it’ll be good for her.”

“I feel like with more practice and the more time I put into my craft, I can bring more to the team,” said Micheaux.

Assistant Coach Shimmy Gray-Miller works with the team bigs. She told me that Micheaux works hard and is picking up the college game at a steady pace.

“We see her work after practice [and] before practice,” marveled graduate student Deja Winters of her teammate. “She’s been putting in work.”

Micheaux arrived in Gopherland no slouch—she was a four-star recruit rated among the top 100 high school players in the country and ninth-best power forward by one rating group. She averaged 23 points and 12 rebounds, made all-state and all-region and led her school to district and regional titles in three seasons. She was a Michigan Miss Basketball finalist.

But college ball and the Big Ten is no cakewalk, and Micheaux knows that her previous accolades mean nothing these days. “She’s helped me a lot,” said Micheaux of Gray-Miller’s tutelage. “Back in high school, I didn’t have a pump fake. I now have an up-and-under [move].”

Whalen loves Micheaux’s soft hands. “I think she has some of the best touch I’ve ever seen,” said the coach. “[Her] timing, physicality, touch around the basket—she has a really bright future.”

The coach reminded me last week that since the season is still relatively young, Micheaux needs “that second wind…to get used to the pace” of the college game. “I’m excited for her,” she said.

Micheaux said she ultimately wants to work with kids after college: “I want to help kids accomplish the goals and dreams they have for themselves.” But until then, her focus is on books and hoops.

Always good to temper expectations in regards to freshmen. 95% of them are up and down as their first season progresses. With her talent, she's going to look absolutely great one game, then pretty human the next. Nature of the beast. Love her potential (another dangerous word) and looking forward to watching her grow as a consistantly productive weapon in the paint.

Honestly, I think our team is "pretty good" this year, with lots of weapons and interesting pieces. Yes, we make too many mistakes, lack defensive intensity at times and some of those interesting pieces are still developing. The problem for our team is that much of the rest of the Big Ten is "Really Good" now and several of them have Elite 8 potential if they start to jell, execute to their talent level and get on a hot streak at the right time.

What's disappointing to me is their play relative to their experience. Scalia, Powell, and Sissoko are in their third year, and we also have four grad students on the roster. They should be making far fewer "freshman" mistakes, and should have an idea of what's required to play good defense by now.

BBJones said:
What's disappointing to me is their play relative to their experience. Scalia, Powell, and Sissoko are in their third year, and we also have four grad students on the roster. They should be making far fewer "freshman" mistakes, and should have an idea of what's required to play good defense by now.
Click to expand...

Yeah, all three of the ones you mentioned seem to have "force a turnover" defensive ability, but I'm a little surprised by their inability to stay in front of their assignment and/or recover from a screen situation consistently. Maybe it's their focus on knowing they need to score. They're truly capable of making dynamic plays, but it would be nice if they committed fewer head-scratcher turnovers/mistakes. It's the thing that makes the difference between pretty good and really good.

BBJones said:
What's disappointing to me is their play relative to their experience. Scalia, Powell, and Sissoko are in their third year, and we also have four grad students on the roster. They should be making far fewer "freshman" mistakes, and should have an idea of what's required to play good defense by now.
Click to expand...

Agree. We need these 3 to be consistent on defense and protecting the ball every game. Your shot can be on/off but your D and rebounding should be consistent.