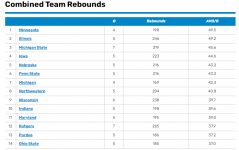 Rose Micheaux is #3 in the Big Ten for rebounds. Mallory Heyer is #7.

Yes, they both lead Diamond Miller of Maryland as of now anyway. 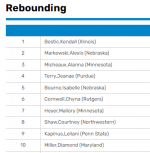 Mara Braun is #2 for scoring.

Rose (Micheaux) earned a double-double (rebounds and points) in three of the last four games. She plays the #5 position, center/post and projects to either the #5 or #4.

I really enjoy watching her play. Its great to see her raise her game from last season when teams earned extra foul points off her. This season is different. She looks more fluid in her space -- still has room to improve -- and mobile. Last season against a big and elite North Carolina team she showed she can play to the level of a top big team.

Mallory Heyer was named the Big Ten Freshman of the Week this week after a double-double (rebounds and points) and strong overall play. She plays the #4 power forward position. Her style appears to be post play, speed to move and run the floor in quick transitions, and shooting accuracy from a variety of ranges including 3's -- that will continue to get better.

I know the "Fab Four" received a lot of attention for the talent they bring to the team. I see Rose as an integral part of the team identity too. They are going to achieve exciting things.