Minnesota football: 5 reasons we shouldn't be sleeping on Gophers

Minnesota football: 5 reasons we shouldn't be sleeping on Gophers​

PJ Fleck is at it again. A strong start to the season has Minnesota fans comparing it to 2019. With hopes of a better finish this time.
Coach Fleck’s Golden Gophers sit at 3-0 following Saturday’s 49-7 pasting of Colorado. And the way they’re winning games is turning heads.
With an average margin of victory of 44 points, the Gophers aren’t just winning, they’re dominating.


It’s a total contrast from their B1G West brethren — many of whom have limped out of the gate. The division is there for the taking. Through 3 weeks, Minnesota looks like the favorite.
Look around the league and you see why.
Iowa’s offense needs an overhaul. Wisconsin looked pedestrian in a home loss to Washington State. Purdue dropped a home contest to Penn State and sits at 1-2 following a close loss at Syracuse.
If there’s ever a year for the Gophers to capitalize, this is it. A huge conference-opener in East Lansing against Michigan State on Saturday looms. We’ll learn much more then.
But for now, here are 5 reasons why you should stop sleeping on Minnesota and start giving Fleck and his staff the respect they deserve.


1) Mo Ibrahim has returned better than ever​

Senior running back Mo Ibrahim’s 2021 season ended prematurely. An Achilles tear in the season-opener against Ohio State left him wanting more in 2022.
He’s come back with a vengeance and is running with purpose. His 202 yards and 3 TDs against Colorado moved him into a tie atop the all-time school scoring charts with Gophers legend Darrell Thompson with 40 career touchdowns.


At his current pace, he’ll continue to rewrite the Minnesota rushing records. Ibrahim currently sits at 3,497 yards and has 12 straight 100+ yard games. That’s the 3rd longest streak among B1G runners since 2000.
He’s averaging 6.9 yards per carry — a career high. He’s turned into a one-man wrecking crew, gaining yards upon yards after contact. Ibrahim’s built for the grind of a B1G season.
Assuming he stays healthy, he’s the kind of workhorse back who wins games in November in this league. The kind of back who can carry the Gophers to Indianapolis and the B1G championship game for the 1st time.

Tanner Morgan’s experience is starting to pay off. The senior quarterback has started since October 2018 and continues each season to progress.
This year Morgan has a talented group of weapons around him.
Leading receiver Chris Autman-Bell was lost for the season following a lower leg injury against the Buffaloes. Autman-Bell had 41 straight games with a reception and was an experienced 6th-year senior. Replacing his production won’t be easy.
But the cupboard is far from empty. Expect tight end Brevyn Spann-Ford to get targeted more. Dylan Wright can stretch defenses deep with his speed. Clay Geary and Michael Brown-Stephens will be asked to step up.
Morgan will need to spread the ball around.
It’s something he’s improved on drastically. Morgan completed 69% of his throws against Colorado. He’s at a 71.9% through 3 games. His TD/INT ratio is 4/1.
Who better to lead the Gophers’ offense through the conference slate than an experienced and much-improved Morgan.

Defensive coordinator Joe Rossi revamped and revitalized the Gophers defense in 2021. Now he’s proving his unit wasn’t a 1-hit wonder.
Minnesota has surrendered just 17 points in 3 games. Each position group is playing at a high level.


Danny Striggow and Jah Joyner are getting pressure on the QB from the edge. Mariano Sori-Marin continues to lead in tackles from his linebacker spot.
The secondary is showing flashes of brilliance as well. Thirty-four yards through the air is all they allowed vs. Colorado, while breaking up 9 passes.
Rossi’s 2021 unit allowed just 278.8 yards per game. They gave up just over 17 points per contest. While the competition ramps up immensely this weekend, Minnesota’s defense is surrendering just 170.3 yards over its first 3 outings. That’ll work.
Coach Fleck has high praise for his defensive coordinator.


Fleck knows a fierce defense paired with a strong running game is what wins in the Big Ten. Rossi’s defense is holding up its end of the bargain.

While certainly not a cake walk, the Gophers’ B1G slate isn’t daunting.
The toughest road tests are at Penn State and Wisconsin. They get Iowa and Purdue at home.
Win in East Lansing on Saturday, and it’s a huge step toward Indy. Michigan State isn’t the same team it was a year ago. But Spartan Stadium is a place the Gophers haven’t won at since 2006.
The West will likely come down to the final 2 weekends: vs. Iowa at home, at Madison. Those should tell the tale. If Minnesota takes care of business prior, late November will be fun in the Twin Cities.


5) Flying under the radar​

Fleck knows how to keep his guys motivated and locked in. It’s one of his strengths as a coach.
The media tabbed the Gophers to finish 3rd in the West. Through nonconference play, they look like the favorite.
But being overlooked isn’t a bad thing. Maybe it’s what keeps Fleck’s troops hungry, with their eyes on the prize.
Minnesota hasn’t won a conference title since 1967. They shared the division title in 2019, but lost the tiebreaker to Wisconsin. They’ve never played in Indy or in a conference championship game.
Could this year be different? Possibly. Saturday’s showing in East Lansing will be the first clue.
From the outside looking in, Fleck’s team has that aura. It has the look of a team destined to get over the hump sooner rather than later. 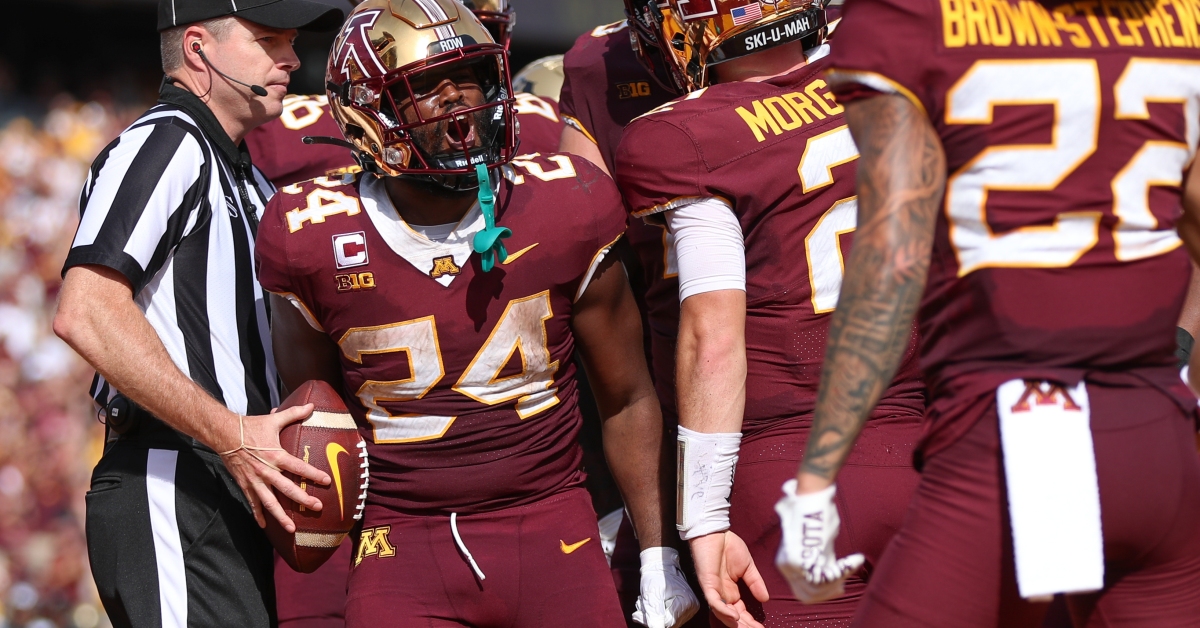 Minnesota football: 5 reasons we shouldn't be sleeping on Gophers

Interesting that a Nebraska beat writer is covering the gophers with all that's happening over there.

was listening to Reusse's weekly podcast with Judd Zulgad.

Reusse was quite complimentary about the Gophers. said they look like the best team in the West Division.

and then he added "their defensive coordinator, Rossi, is really good."

to which Zulgad responded: "yeah. I think he's going to get a real job some day."

so apparently, being the defensive coordinator of a B1G team is not a real job.

Reusse was quite complimentary about the Gophers. said they look like the best team in the West Division.

and then he added "their defensive coordinator, Rossi, is really good."

to which Zulgad responded: "yeah. I think he's going to get a real job some day."

so apparently, being the defensive coordinator of a B1G team is not a real job.
Click to expand...

neither Ciarocca or Rossi strike me as head coaches

" His TD/INT ratio is 4/1." That one interception hit the receiver in the chest.

FanSinceTheFifties said:
" His TD/INT ratio is 4/1." That one interception hit the receiver in the chest.
Click to expand...

In fact, it was thrown a bit behind BSF but should have been caught.

Dakota2 said:
In fact, it was thrown a bit behind BSF but should have been caught.
Click to expand...

Yes the left side of his chest

Dakota2 said:
In fact, it was thrown a bit behind BSF but should have been caught.
Click to expand...

l'd like to see it again, but it looked to me like it hit the receiver in the ribs, close to his arm. Agree it would normally be caught -- and if not caught, dropped and not bounced up and intercepted.