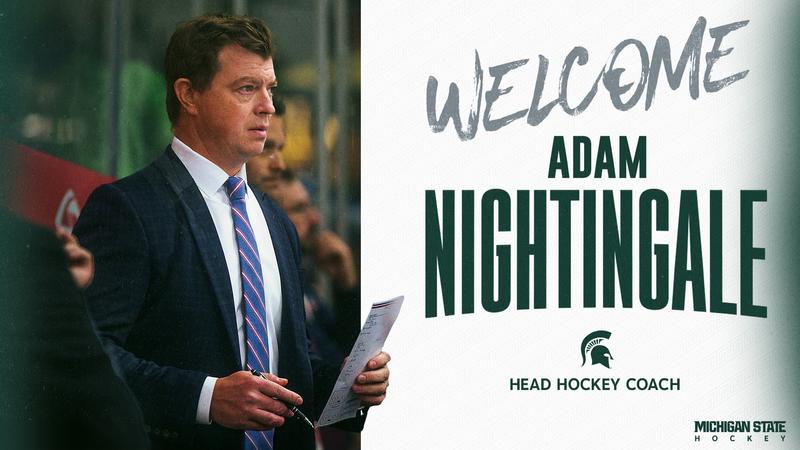 East Lansing, MIch. -- Adam Nightingale, a Spartan alumnus with hockey experience at the international, professional, collegiate and youth levels, has been named

The news is a few days old. Nightingale did some coaching at Shattuck.

Nightingale comes to MSU after two seasons as head coach at the United States National Team Development Program (USNTDP) and brings four years of NHL experience, including serving as an assistant coach for the Detroit Red Wings in 2019-20. Known for his exceptional player development and recruiting ties, Nightingale was a two-year alternate captain as a Spartan student-athlete.

"It brings me great pride to bring Adam Nightingale back to Michigan State University as the new head coach of Spartan hockey," said Alan Haller, MSU Vice President and Director of Athletics. "Adam has a passion for the school and the program, and his combination of skill development, player development and recruiting ties promises to make the next era of Spartan hockey a successful chapter in the storied history of a proud program.

"Spartan hockey has a rich tradition and an engaged alumni base which cares deeply about their program. Throughout this process, Spartan alums proved to be an invaluable resource to me. I put together an advisory group of alumni including some former All-Americans and NHL players, who played a significant role in helping me develop the criteria to identify the right coach for sustained success for Michigan State hockey. Beyond the advisory group, I had conversations with several other alums, including many with NHL experience as players, coaches and in the front office. Beyond Spartan alumni, I also connected with several members of the hockey community at both the professional and collegiate level, each of whom recognized MSU's great history and the importance of this hire to the program. It all played a role in helping me develop a better understanding for the college hockey landscape and the qualities our next coach needed to possess.

"Criteria such as skill development, strong recruiting ties, style of play, respect throughout the hockey community and an ability to holistically develop student-athletes on and off the ice became the focus and guideposts for the search. Being a former Spartan player was not a requirement for either me or the advisory group. That was something that was very clear. My focus was finding the right fit based upon the developed criteria. In a thorough search, one which included conversations with some successful current head coaches, Adam matched all the established criteria.

"One thing rang very clear throughout this process. Michigan State is one of the premier college hockey programs in the country. Everyone, from alumni to our loyal fans, has high expectations each and every year. I hope they're all smiling today because the future is bright for Spartan hockey. We will take the ice this fall in a renovated Munn Ice Arena, and across the board there is a renewed commitment to the program. Perhaps most importantly, Adam brings a thorough understanding of where we are as a program, and a clear plan for what's required to once again reach championship heights."

Nightingale will be formally introduced at a press conference on Monday, May 9.

"I'm extremely thankful and humbled to have the opportunity to lead at Michigan State University," said Nightingale. "Spartan hockey is a source of pride for the University, the East Lansing community, and the entire state of Michigan. I'd like to thank Athletic Director Alan Haller, Deputy AD Jennifer Smith, and everyone involved in the search process for the opportunity to come back home and once again be a part of this storied program.

"We will hire a staff that is well equipped to support our student-athletes and will be committed to developing them as a person, not just a hockey player. We want to bring in high-level players with aspirations to work hard and help them develop to the point where they have the opportunity to play in the National Hockey League.

"Our staff will put a premium on player development so that we can play an exciting and skilled brand of hockey. We will continue the traditions of hard-working student-athletes who are standouts not only on the ice, but also in the classroom and in our community. We look forward to building the program back to where our proud alumni and fan base know it should be, which is the top of college hockey."

For the last two seasons, Nightingale has served as head coach at the USNTDP. He guided his current team to a silver medal at the U.S. Under-18 Men's World Championships last week. His U-18 squad played 15 games against Division I competition throughout the 2021-22 campaign, going 8-7 and recorded an additional three wins over Division III schools. His roster boasts 22 Division I commitments.

Prior to his time with the USNTDP, the Cheboygan, Michigan, native spent four seasons on NHL staffs. From 2017-20, he was a member of the Detroit Red Wings organization. As an assistant coach in 2019-20, he was responsible for player development, pre-scouting opponents and running the penalty kill. He worked as the video coach for his first two years in Detroit, a role he also held for the Buffalo Sabres in 2016-17.

Between his stints at Shattuck, Nightingale was the director of hockey operations at Michigan State, serving at his alma mater overseeing all team video as well as team travel.

While he began his collegiate career at Lake Superior State, (2000-02), the final two seasons of Nightingale's collegiate playing career came at Michigan State (2003-05). Over a combined 118 games, he totaled 37 points (18g-19a). At MSU, he served as alternate captain for two seasons, and won the Spartan Fitness Award in 2004. Nightingale then went on to play parts of four seasons in the ECHL with the Gwinnett Gladiators, Greenville Grrrowl and Charlotte Checkers.

Nightingale's family includes his wife, Kristin, and three children, Trevor, Emmerson and Keeton. His older brother, Jason, is the Assistant Director of Amateur Scouting for the Buffalo Sabres, while his younger brother, Jared, is also a Spartan alumnus and is currently the assistant coach for the Rockford Ice Hogs of the AHL
Click to expand...