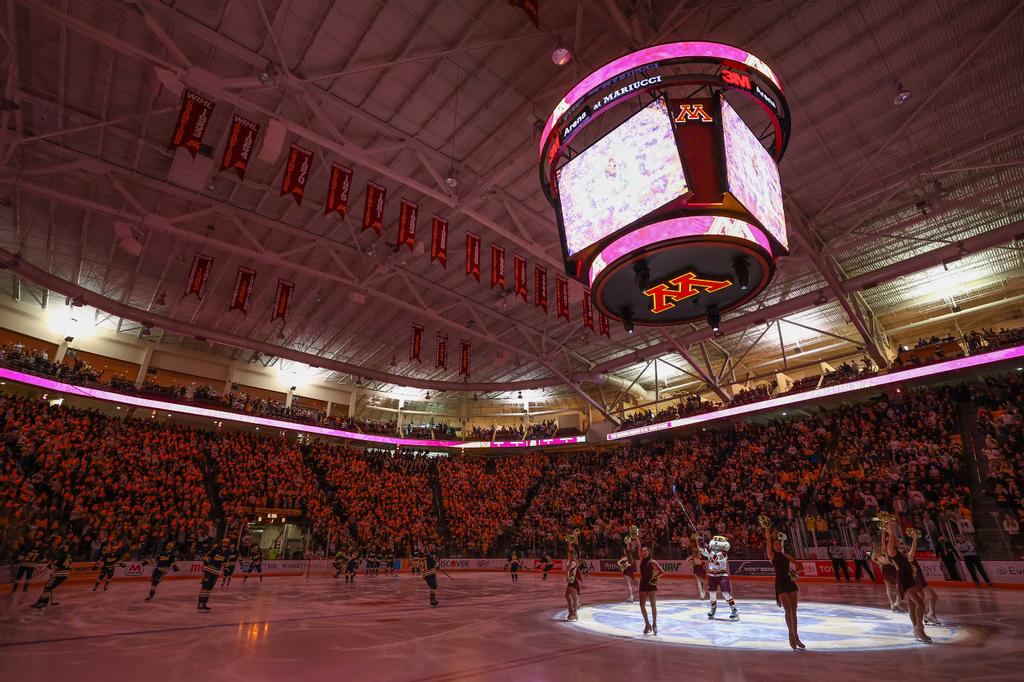 I present you the first ever Gopher hockey mailbag on Gopherhole. I answer all the questions you have about Gopher hockey. Enjoy.

OC: Who are the Gophers’ biggest competitors in the big ten besides Michigan?

First of all, Aidan has a bright future in the sports media world. He runs his own Minnesota sports page on Instagram where he posts news and info on all Minnesota college hockey teams and the Minnesota Wild. Check out mnhockeyteritory.

To answer his question I’d say Michigan state will take a nice step forward. I think Ohio State will continue to compete and Wisconsin will definitely take a step forward. The biggest competitor outside Michigan would have to be Notre Dame.

Greg. N: When Motzko took the job he said the Gophers were going to get older but that doesn’t seem to be the case (I admit I don’t have the stats). Clearly, he is getting top recruits but not older recruits. Has he moved away from recruiting older players?

Anytime you have a chance to get young and top prospects like Logan Cooley, Cole Eiserman, Oliver Moore, Beckett Hendrickson, and others, you’re gonna pull the trigger. I think the NAHL is growing so you will see older recruits coming to Minnesota in the future but most of the NAHL kids are going D1 after a year or two, so you aren’t getting that much older. I think you put your priority on the top recruits and in the last couple of years it’s been younger guys.

Jake. C: What do you see being the opening night lines this year?

This is a great question by Jake Carpenter, younger brother of the famous Ryan (rcarp04) who somehow got his twitter suspended. But this is something I’ve been thinking of for quite some time. One of the main reasons Cooley came over to the Gophers was his team USA teammates Matthew Knies, Brock Faber, and Chaz Lucius pushing him to do so. Now that Lucius is gone you have to replace him. Jimmy Snuggerud, who just spent a lot of time playing with Cooley, is a great replacement.

I would expect they either start the year with a line of Knies-Cooley-Snuggerud or at some point play them together. In terms of the others, I would guess

Mark. B: Who’s going to bring the scoring this year and will it be much more than last year?

Well first off it will be hard to replace what Ben Meyers put up for the Gophers but they definitely have some very intriguing offensive threats who can replace points that are missed with Walker, Lucius, Meyers, and McLaughlin gone.

Cooley is obviously one guy everyone will be expecting to put up a lot of points, will it be more than Meyers or McLaughlin? My guess is he will finish above 30 points. You also have to realize Knies put up 15 goals and 33 points in 33 games as a freshman so you could see a big improvement there. Knies is drawing attention already as a possible preseason Big-Ten player of the year candidate. I think Snuggerud will pick up some points, especially with the fact he will get a chance to play with both Knies and Cooley.

But also Rhett Pitlick, Mason Nevers, and Aaron Huglen have the chance to get more minutes and possibly put up 20-point seasons. You also can’t forget about Bryce Brodzinski. In his junior season, Brodzinski put up career highs in goals with 12, assists with 14, and points with 26 in all 39 games the Gophers played. As a senior, Brodzinski will be expected to lead by example for the freshman and will likely play with many of them.

Connor Kurth and Brody Lamb also have some serious offensive gifts so who knows maybe one, if not both, take off like a canon and put up points. This will definitely be an exciting team.

Todd. A: Can our backup Goaltender start 5 games this year?

Close finished with a 14-5-0 record notching an impressive Big-Ten second-best 1.95 goals against average. Close also put up a fourth-best .925 save percentage. He also was the first Gopher goaltender to shut out Wisconsin in back-to-back games since 1934.

You will see Owen Bartoszkiewicz and possibly Zach Wise play in the two scrimmages this year. Will they start a regular season game? That depends on how Close is playing and his health. Based on last year Close proved you can’t take the net away from him.

Aidan: Who is the most underrated recruit of the 2022 class and why is his name Brody Lamb?

Brody Lamb is definitely underrated in terms of the other freshman coming in but I wouldn’t sleep on Connor Kurth. The sixth-round pick put up 35 goals and 81 points in 65 USHL games with the Dubuque Fighting Saints. He has a heck of a shot and might be sneaky good for the Gophers. Both Lamb and Kurth will draw some power play time and I would expect both to have great starts for the Gophers.

I said earlier that I would think Huglen and Pitlick will have some great breakout seasons so I won’t use them here. I will go with Mason Nevers and Bryce Brodzinski. Nevers just had a career year in games played with 38, goals with six, assists with seven, and points with 13. He had 19 goals and 40 points in 49 career games in the USHL with the Des Moines Buccaneers. Once an Edina hockey superstar, Nevers posted 46 goals and 82 assists for 128 points in 74 games for Edina high school.

Will. C: Can Justen Close bring us to the promise land?

Yes. Close was one of, if not the best goaltender in the Big-Ten for the second half of the season. You could even argue in all of college hockey. That was also the only time Close played for the Gophers so let that sink in. I think he takes another big step and think it is definitely repeatable. Close is very calm in goal and just plays so positionally well. LaCombe, Faber, Johnson, Staudacher, and Koster coming back also does nothing bet help.

Spokes612: Are the Alumni more involved now that Motzko is here? Always heard grumbling about the alumni keeping their distance when the Don was here.

Although I don’t know about the Don part but alumni are involved now. I have seen recent Gophers at the rink and many other older alumni. Paul Martin also helps out on the coaching side and is heavily involved. I’ve even seen alumni talking to players after games in the concourse and outside locker rooms.

Max. H: What are the real expectations for Cooley? We know he went #3 overall in this last draft and we know his talents but the kid is only 18-19 years old, can he step up and lead this team to another frozen four?

There will be some pretty high expectations on Cooley for this year but it is well deserved. The Gophers were just ranked second in the USCHO rankings and Cooley is a large reason why. He went third overall in the most recent draft and will get top minutes, power play, and the chance to play with other top offensive threats like Knies and Snuggerud. I would expect a 30-40 point season and the same for Knies.

Gophertennis: Do you expect ‘BT’ hockey will expand at any point?

I would imagine so. College hockey is growing. Last year St. Thomas joined and now Augustana. UCLA and USC will be joining the Big Ten in 2024 but that’s in football. With seven teams in the Big Ten so one would expect an eight-team to be added, maybe St.Cloud, North Dakota, or Minnesota Duluth joins. But the most probable would likely be ASU. Who wouldn’t like to spark the North Dakota rivalry though?

Wildboys59: If you could bring back one former gophers player for this year’s team who would it be?

Oh my, so many to choose from. The first guy I thought of was Thomas Vanek but that might be biased because I grew up a Wild/Sabres fan. Anyway, in 1981 Aaron Broten recorded 47 goals and 106 points in 45 games, he’d be nice to have for this year. Pat Micheletti recorded 120 goals and 269 points in 162 career games for the Gophers so he’d be really nice to have too. John Mayasich, John Mariucci, and Tim Harrer would be awesome too. But how about adding Mike Crowley or Jordan Leopold on the blue line? Or how about the physical presence of Chris McAlpine? Oh, so many to choose from. I’ll go with Tomas Vanek just because that’s the first guy that I thought of.

Alex. M, O.C, & FutureGophers: Who are some recruits the Gophers are going after?

I don’t know exacts but I’ll say some guys who I think would fit. Logan Hensler currently playing for the U.S. National U17 Team. You have Max Rud, Sam Rinzel, and Brady Yakesh coming next year. The following you have John Whipple. So you could add Logan Hensler but that creates a log jam at defense, which usually is never a problem.

Faber is likely going to the NHL after this season, LaCombe and Johnson will also probably follow. They have Cal Thomas, Ryan Chesley, and Luke Mittelstadt but guys like Mike Koster, Carl Fish, and Matt Staudacher will also be gone in 2024-2025. Chesley might also have signed a contract with the Capitals. So in 2024-2025 you would have Mittelstadt, Thomas, Whipple, Rinzel, Rud, Yakesh, and possibly Chesley.

You’re always going to try and make your team and future teams better. This is all speculation and trying to read between the lines. I could give a big list of uncommitted players but what good does that really do? I would also wonder about goaltender but they have Geno Pichora coming next year.

I’m going to go with 2024. Having Cole Eiserman, Teddy Townsend, Javon Moore, Beckett Hendrickson, Brody Ziemer, and John Whipple all coming in one class is absurd. But no disrespect to the 2023 class which is just as good. Rinzel was taken 25th overall by the Chicago Blackhawks in the most recent NHL draft and Oliver Moore is likely a top 20 pick in this year’s draft.

This was really fun. I will probably do another mailbag halfway through the season in January so I’m looking forward to that. Thank you for all the great questions.