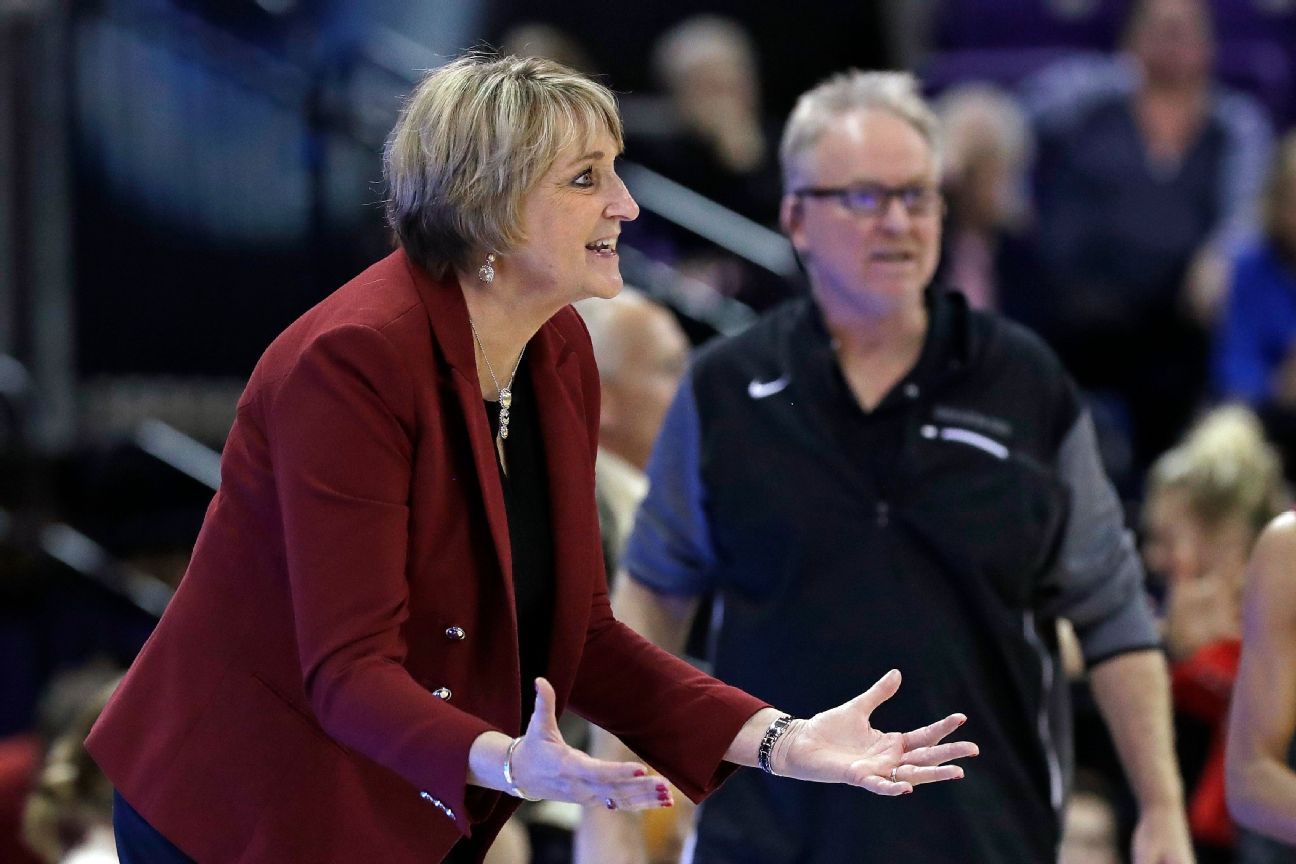 Longtime women's basketball coach June Daugherty, who spent 11 seasons at both Washington and Washington State, died Monday at her home in Boise, Idaho. She was to turn 65 next week.

It was June Daugherty, in the 2006 NCAA game that lives in Gopher infamy, who coached the Washington Huskies to an upset over Minnesota. The exodus followed.

Longtime women's basketball coach June Daugherty, who spent 11 seasons at both Washington and Washington State, died Monday at her home in Boise, Idaho.

Daugherty's husband, Mike, who was also her assistant coach throughout her career, confirmed her death in a tribute message posted to Facebook.

"Those who knew her knew how special and spectacular she was," Mike Daugherty wrote. "She was the greatest mother, lover and friend. She had zero intolerance except for those who were hateful and intolerant. The world is a lesser place starting on Tuesday."

The Daughertys have two adult children, daughter Breanne and son Doc, who are twins.

Daugherty had dealt with heart issues, for which she had taken a medical leave of absence during her last season at Washington State in 2017-18.

After playing professionally overseas for four years, she began her coaching career as an assistant at Kent State in 1983.

From 1985 to 1989, she was an assistant coach at Stanford to Tara VanDerveer, whom she had faced on the court in college when VanDerveer was at Indiana.

"From playing against her in college, to coaching both with her and against her, I've known and admired June for decades," VanDerveer said in statement Wednesday. "Her positive and upbeat attitude was infectious, and I am heartbroken she is no longer with us. We will all miss her greatly."

After leaving Stanford, Daugherty earned her first head-coaching job at Boise State. She went 122-75 from 1989 to 1996 and led the Broncos to an NCAA tournament appearance.

Daugherty coached at Washington from 1996 to 2007, guiding the Huskies to six NCAA tournament appearances, including an Elite Eight berth in 2001. The Huskies went 191-139 with Daugherty at the helm.

"The Husky community is heartbroken to hear about the passing of June Daugherty. Not only did Coach Daugherty make a lasting impact at the University of Washington over her 11 years on campus, but her commitment and influence on women's basketball in the state of Washington and Pacific Northwest has been felt for over two decades," Washington athletic director Jen Cohen said in a statement. "On the court, she led Washington to six NCAA appearances, but it was her ability to promote a family atmosphere and positively mold the lives of the many women who played under June that will be remembered and missed the most."

From 2007 to 2018, Daugherty was at Washington State, where she went 130-217 but helped the long-struggling Cougars make three postseason WNIT appearances, including the 2017 semifinals.

"June's impact on women's collegiate basketball in the Pacific Northwest is unmatched and we join the University of Washington and Boise State in recognizing all she did to grow the sport," WSU athletic director Pat Chun said in a statement. "Throughout her career, she fought tirelessly for her players, her teams and her community, and she will be missed."

"June Daugherty was a shining light in the Pac-12. She will be deeply missed," the Pac-12 said in a statement.
Click to expand...

Longtime women's basketball coach June Daugherty, who spent 11 seasons at both Washington and Washington State, died Monday at her home in Boise, Idaho. She was to turn 65 next week.

It was June Daugherty, in the 2006 NCAA game that lives in Gopher infamy, who coached the Washington Huskies to an upset over Minnesota. The exodus followed.

And the program never truly recovered…