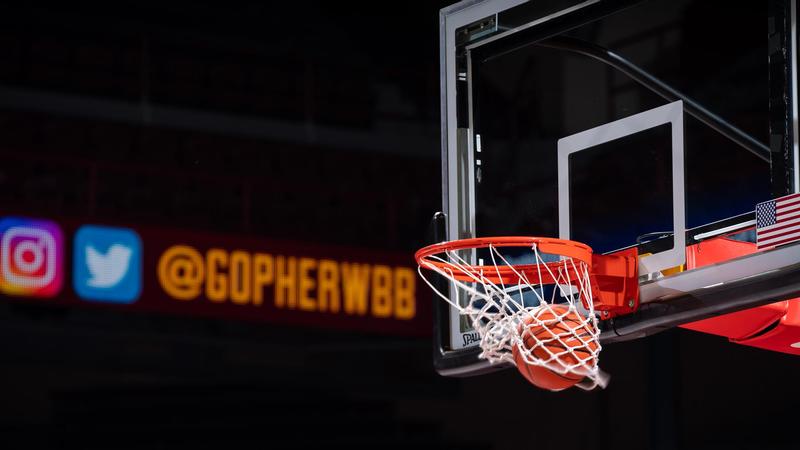 Following an exhibition game against Minnesota Crookston on Oct. 31, the first for the Golden Gophers since the 2013-14 season, the 2021-22 campaign gets underway on Nov. 9 with a home matchup against Jacksonville.

The Gophers then hit the road for the first time on Nov. 12 with a visit to Pac-12 foe Arizona State. Minnesota follows that by welcoming in George Washington (Nov. 14) and American (Nov. 17) before departing for its biggest test of the non-conference slate.

The Golden Gophers are one of eight teams scheduled to compete in the inaugural Women's Battle 4 Atlantis, Nov. 20-22. Minnesota is set to open with UConn, then will face either South Florida or Syracuse, depending on results. The other half of the bracket has Oregon taking on Oklahoma and South Carolina facing Buffalo. The Gophers will play one of those four teams in their final game on Nov. 22.

After the Battle 4 Atlantis, Minnesota returns to Williams Arena for four straight home games, the first of which comes on Nov. 26 against a Bradley squad that reached the NCAA Tournament last season. After taking on UTSA on Nov. 28, the Gophers play host to North Carolina as part of the 2021 Big Ten/ACC Challenge. Like Bradley, the Tar Heels, also reached the NCAA Tournament last year.

A new twist to the schedule in 2021-22 is that teams will play Big Ten games before wrapping up all non-conference contests. This last happened for Minnesota in the 2009-10 season.

League action begins for the Golden Gophers on Dec. 6 with a visit from Nebraska, while they hit the road for the first time in-conference by traveling to Michigan on Dec. 12.

Minnesota steps back into conference action at home against Northwestern on either Dec. 30 or 31, while the Gophers' first game of 2022 will send them to Rutgers on Jan. 6. Defending Big Ten champion Maryland then visits Williams Arena on Jan. 9, while the first Border Battle matchup takes place in Madison on Jan. 12 against Wisconsin.

The Golden Gophers are home for two straight against Ohio State (Jan. 15) and Iowa (Jan. 20) before taking part in back-to-back road games at Michigan State (Jan. 23) and Purdue (Jan. 27). A Border Battle rematch with the Badgers in Minneapolis on Jan. 30 closes out the month.

The regular season concludes with seven games in February, alternating between home and road sites.

After playing at Indiana on Feb. 3 at Indiana, Minnesota takes part in four consecutive rematches, starting with a home matchup with Michigan State on Feb. 6. The Gophers will then visit Iowa on Feb. 10, host Rutgers on Feb. 17 and travel to Nebraska on Feb. 20.

The Big Ten Tournament is scheduled to be held in Indianapolis, Ind., March 2-6 at Bankers Life Fieldhouse.
Click to expand...

I like it, Drake and NC will be tough and a potential to beat Uconn.