Gophers should have at least three picks in the draft (Friday and Saturday). Michigan may have four top ten picks and five or six first round picks including potentially both #1 (locked in) and #2. Last year and this year combined for them make up likely the best two class group ever assembled. If they all come back they will be runaway favorites next season.

Michigan will be favorites but we may have a little more depth and experience, plus better goaltending. Those games should be electric this year with the talent on both teams. Agreed with most of your predictions, I've seen wildly varying projections on Knies and Broz.

Need Lucius to be a big impact freshman with Ranta + two of our other top goal scorers gone from last year.

Michigan is bringing back a third round Swedish goalie that had a .935 in seven games last year so their goaltending will be fine and probably put up similar stats as Lafontaine given how dominant they should be over the weak teams.

bonin21 said:
Michigan is bringing back a third round Swedish goalie that had a .935 in seven games last year so their goaltending will be fine and probably put up similar stats as Lafontaine given how dominant they should be over the weak teams.
Click to expand...

True. They definitely have the more explosive forward group. We might have the best defense/goaltending combo in the country, even though they have more high end guys back there. I foresee Johnson being his usual rock solid self with hopefully a little more offense this year. Faber I could see producing big offensively while also being great defensively. Lacombe raises my blood pressure when he plays but will put up big points. Then Staudacher/Brinkman/Koster should all be solid stay-at-home types. I hope we can pack Mariucci for those Michigan games because it should be some of the best hockey that arena has seen in 5/6 years.

Gophers1992 said:
I hope we can pack Mariucci for those Michigan games because it should be some of the best hockey that arena has seen in 15 years.
Click to expand...

Fair, I was trying to give a little tip of the cap to the Bjugstad/Rau era, which you mentioned.

I know! Tip of the cap to the Hughes brothers (family) too.

Lucius falls and goes 18 to Winnipeg. Knew he would not go top 10. Need to be able to skate at a certain level in today's NHL. He needs two years minimum on campus (and then can play with his brother).

Watching the NHL draft is like watching an infomercial for Michigan Wolverine Hockey. How the hell does Mel Pearson get all of these blue chippers to come to Ann Arbor?!

Michigan another first rounder at 24

GopherJack said:
Watching the NHL draft is like watching an infomercial for Michigan Wolverine Hockey. How the hell does Mel Pearson get all of these blue chippers to come to Ann Arbor?!
Click to expand...

Here's a Michigan Daily article on recruiting from last November: 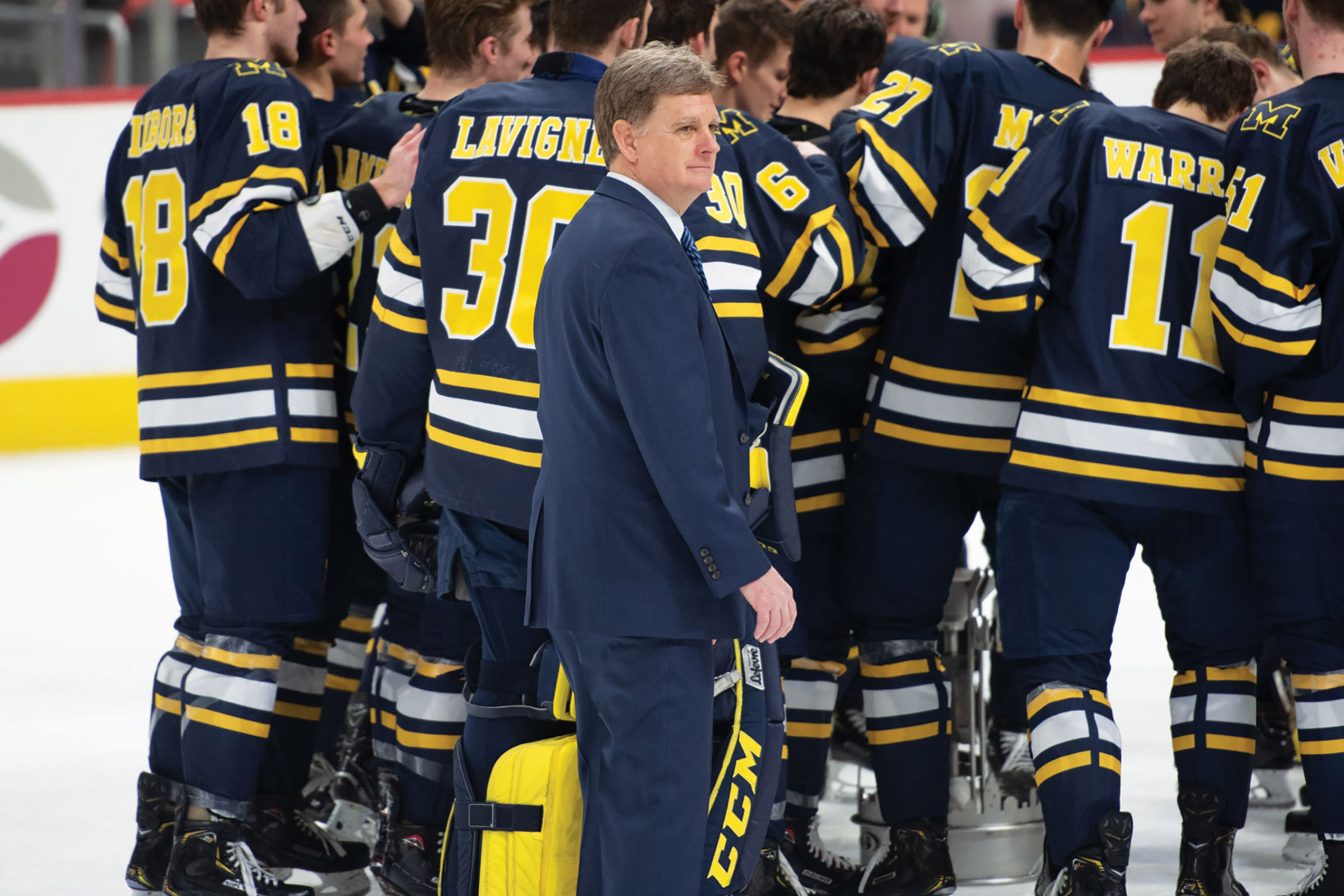 The Michigan hockey coaching staff is always looking into a crystal ball, trying to predict the future. Recruiting is all about identifying a team’s needs and young players’ skills several years in advance, a skill that coach Mel Pearson and his team have become better at season after season...

A central job of coaching is building a network. Each coach focuses on a specific region: Pearson has strong ties in Minnesota, Mayotte uses the connections he made throughout the Northeast in a previous coaching job and associate head coach Bill Muckalt covers his home region of western Canada. Between the three, they have the Wolverines’ key hotbeds covered.

Recruiting happens 11 months out of the year, whether that means United States Hockey League or USA development camps over the summer or different junior league games during the fall, winter and spring.

When the Wolverines’ have road games during the regular season, either Muckalt or Mayotte is usually out trying to find the next generation of Michigan players. When the Wolverines are playing at home, the coaches try to watch some recruits in the area before the game.

The system works because the coaches build trust with people in their area. When, for example, Muckalt is recruiting a player in British Columbia, there are five or six people the player can reach out to that will speak to Muckalt’s character and Michigan’s program as a whole.
[...]

A player and their family have to be all in at such a young age, it’s not surprising that many of them have family connections to the NHL.

Brisson is the son of a prominent NHL agent. Freshman forward Philippe Lapointe’s dad, Martin, is a two-time Stanley Cup winner. Bordeleau’s dad, Sébastien, played in the NHL along with his grandfather, uncle and two great-uncles. As the game gets increasingly expensive and time-intensive, families that are already integrated into hockey culture are among the few with the means and desire to make the necessary investment into the sport.

Even players who grew up steeped in hockey don’t always take the most conventional path. Beniers’ road to Michigan gives a perfect — yet also unconventional — look into the recruiting process, and why forming connections early is critical.

“Well, it started with him telling me, ‘No,’ ” Mayotte said.

Mayotte had tried recruiting Beniers for three years when he was coaching at Providence College. In that process, he developed a strong relationship with Beniers and his family.

Wanting to stay close to home, Beniers initially committed to play at Harvard, but when the COVID-19 pandemic put the Ivy League’s season in question this summer, he decided to reconsider his options.

Mayotte got a call over the summer, letting him know that Beniers was considering a switch. Beniers hadn’t seriously considered Michigan in his first round of recruiting, but had been to Ann Arbor as part of the U.S. National Team Development Program which played against the Wolverines last season.

Beniers’ parents told Mayotte that after visiting, he wondered if he should have taken a more serious look at Michigan.

Late in the summer, Beniers called Mayotte with his final decision.

“Hey coach, you know, I really appreciate everything that you did,” Mayotte recalls Beniers telling him. “I know that Michigan is a great place, but growing up in Boston, I’ve always wanted to be close to home, so… Go Blue, I’m coming to Michigan.”

When it came down to it, it was a decision about hockey. He wanted to be able to play during his draft year, and he thought the Big Ten was most likely to make that happen. Mayotte served as a familiar face in a program Beniers knew little about. Without the connection, it’s unlikely he would have ended up in Ann Arbor.

“That’s the biggest thing when you’re making a change quickly,” Mayotte said. “You never really know exactly what a place is going to be like… A lot of times, it comes down to: Who do you trust? Do you trust the people that you’re going to play for?”

Michigan builds that trust through the reputation of its coaches and the program as a whole. And it has the track record to back it up.

The Wolverines’ alumni — Quinn Hughes, Kyle Connor, Kevin Porter — serve as proof to recruits that the Wolverines can deliver on their promises.

“You have to be sincere,” Mayotte said. “If you tell them something’s gonna happen, it has to follow through.”

For Pearson, this year’s historic 10-freshman haul is evidence that he’s proven himself as someone who follows through.

Thanks ILH for the in-depth look at why and how their recruiting works. I would hope Motzko and staff are equally as proficient and thorough in their recruiting. If Michigan keeps this up, they will be tough to beat.

Knies goes to 57 to Toronto. Like Lucius, fell from where he was expected to go a year or two ago. Skating the problem like so often the case with Gopher forwards lately.

St Cloud gets the best Minnesota D man of the class in Peart (54 to the Wild) after Mittelstadt and Williams get caught up to by their peers.

Tristan Broz 58 to Pittsburgh. On the flip side, I think this is a guy that has been climbing the charts relative to his peers.

Lamb went in the 4th. Everyone else undrafted. Mittelstadt was projected to be a first rounder at one point.

Maybe I'm overthinking but it seems like our 3 forwards went to teams with pretty good forward depth, which hopefully means at least 2-3 years in college for each of them. Obviously a lot can change but who knows.

If any of them leaves after one year they are not smart regardless of the NHL team.

Just hand Michigan the National Championship. It’s over before it starts. Read that on uscho from a Michigan fan. He’s going to be so butthurt when it doesn’t happen

Well they are the most talented college hockey team ever assembled. Favorites for sure. But we won't know if they pull it off until March.

TRF Guy said:
Just hand Michigan the National Championship. It’s over before it starts. Read that on uscho from a Michigan fan. He’s going to be so butthurt when it doesn’t happen
Click to expand...

We had some pretty stacked groups in 06 and 07 that didn't get it done, why you play the games, remember all these studs have to go up against men in their mid 20's who will beat that crap out of them

I seem to remember Team Canada having a lot of first round draft picks in the World Juniors this past winter. Some tried to call them the best team in the history of the tournament. Turns out, USA showed that they weren't even the best team on this continent this year.