Gophers basketball coach Ben Johnson lost two of his top forwards to season-ending knee injuries this summer, so the addition of recruit Kadyn Betts comes at just the right time.

Betts, a 6-8, 210-pound Colorado native, will officially join the team Saturday after reclassifying from the 2023 class earlier this month.

The Gophers were strongly considering redshirting Betts. But the loss of juniors Parker Fox and Isaiah Ihnen for the second straight year to injuries could mean their latest newcomer might be needed sooner than later.

Johnson's 2022 recruiting class has the potential to be one of the program's most impactful in years. Betts joins Pharrel Payne, Jaden Henley, Josh Ola-Joseph, and Minnesota Mr. Basketball Braeden Carrington.

It wouldn't be a surprise to see all five talented freshmen see the floor this season, especially with only Jamison Battle and Treyton Thompson returning with minutes played as scholarship players in 2021-22.

"They talked about how good their freshmen class is," Betts said. "They're just excited for me to get out there as well, work with the team and get better." 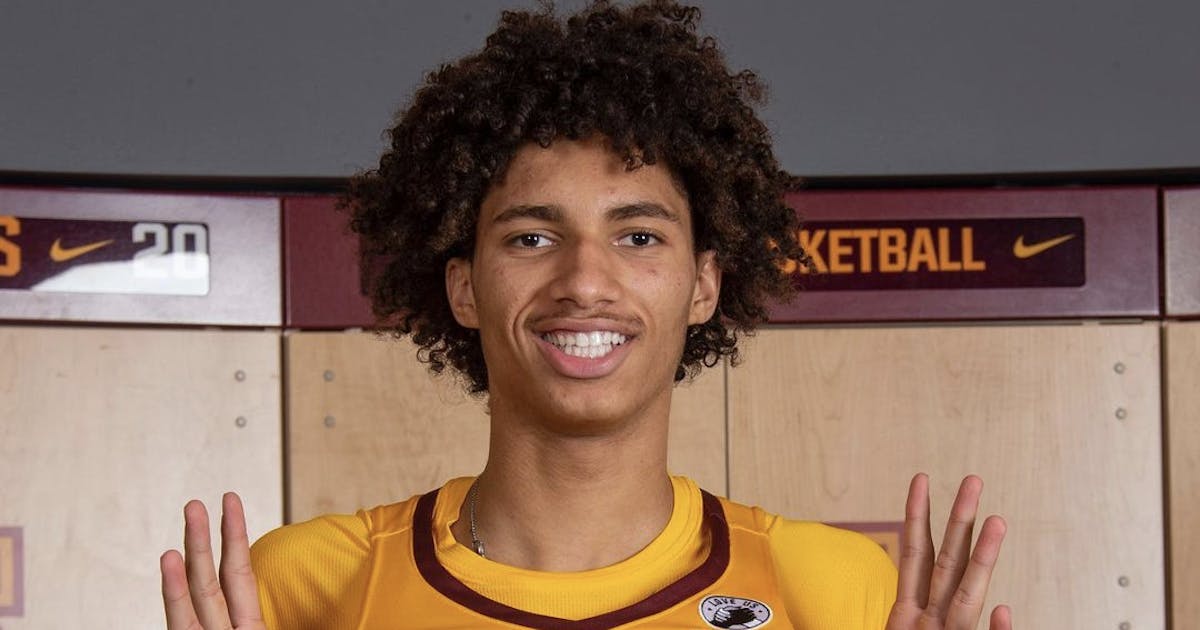 The 6-8 forward from Colorado reclassified to add depth to Ben Johnson's injury-plagued frontcourt.

Does Betts get more run than Thompson did last year?

GopherBlood666 said:
Does Betts get more run than Thompson did last year?
Click to expand...

I don't remember even seeing a clip of him playing but, what I read in snippets leads me to guess no. Needs to get stronger, add weight. Played at a high school with limited competition and intended to go to prep school to solve that.
But another injury and we'll just need tall guys.

Well, from the Strib article:

As a junior last season, Betts led the state of Colorado's big class in double doubles (22) and blocks per game (2.5), while also finishing second in scoring (22.7) and rebounding (12.3) at Pueblo Central.

did a little checking - Pueblo Central went 23-4 and reached the semi-finals in the 4A State tournament. (4A is the 2nd-largest class in the state - they go 1A to 5A)

so I don't know about the competition, but they made it to the State Semi's - not too shabby. Also went 8-2 in a conference which has a mix of 4A and 5A teams.

I will take the UNDER on 152 minutes for Betts. I guess I should say with the caveat that Battle/Garcia dont get hurt. TT would have been under 80 minutes if not for COVID/injuries. He had 93 minutes in 3 games, 59 in the rest of the season. As they already said they were considering a redshirt means they also think he is not ready.

Betts has a skill that translates almost immediately - he can really shoot.

It's almost impossible for me to predict how much PT might be available because I know nothing about most of the roster, but he is 6'8" player who can shoot, so we'll see.

Something tells me that his path to playing time could actually depend more on, "can you pick up our M-2-M concepts fairly quickly and give us 3-5 minutes of consistent decent defense and pull a couple of rebounds when we run into foul trouble or when a guy needs a blow." Hitting a few shots would be a nice bonus.

I only say that because last year, TT showed that he could knock down shots. But it seemed his playing time was very limited because Ben had to change up his defense from man (which he seems to prefer) to zone (used more as an emergency change of pace), because TT had severe defensive limitations.

A lot of practice time ahead of us. It'll be interesting to see if he can fit whatever role that coach Johnson has in mind for him. Or maybe he'll show something positive this fall that the coaches weren't expecting.

My guess would be that his minutes are larger than Henley, Ola-Joseph, all of the walk-ons put together and close to that of Carrington.

He went from not seeing the court until 2024 (if he redshirted) to now being a contributor in 2022 (reclassifying a year earlier). What a swing.

RockChalk said:
My guess would be that his minutes are larger than Henley, Ola-Joseph, all of the walk-ons put together and close to that of Carrington.
Click to expand...

Maybe on the first part, but Carrington will get 20 mins a game.

With so many freshmen we will struggle defensively. There are too many offensive sets these new ones have never seen and they will struggle to recognize their rotations. Without Fox and Ihnen the defense will struggle in the B1G.

I am excited, however, to see these young guys grow up and establish a very solid team within two years.

Defense is my worry as well. Luckily our early non con will allow for adjustments. I also don’t expect the staff to get too crazy conceptual wise in coverages and screens. With our length we can be ok I think

Defense or Offense, either way these freshman, which we will have several playing good minutes, will be going up against a player much better than they had in front of them last year.

Each level up competition gets tougher and tougher, thus adjustments and experience will need to take place.

This group will be exciting to watch play and grow. Betts will get there, its just going to take time.

leib0039 said:
I will take the UNDER on 152 minutes for Betts. I guess I should say with the caveat that Battle/Garcia dont get hurt.
Click to expand...

Somebody will be hurt or sick, at least temporarily, or just not play because of the coach's decision. The team played 30 games last year. Only Luke Loewe played all 30. Sutherlin missed 2 games, Curry 4, and Battle, Stephens, Willis, and Daniels missed one each.
Last edited: Aug 29, 2022

We are all excited about what Garcia brings with on the O side. After watching the Purdue/NC game, its obviously he needs to get stronger and work on post D. Williams absolutely destroyed him in that game. We all saw how deficient TT's D was last year. The newbies will be tested as well. IMO, Fox will really be missed but he is gone. Cooper was OK but not great from the little I saw and seemed to lack foot speed.

Ben has his work cut out for him

Yeah just HM. We didn’t win enough. We had the only two players who were in the top 10 in scoring in the conference that were not on the three teams. I still think he played above most peoples expectations.