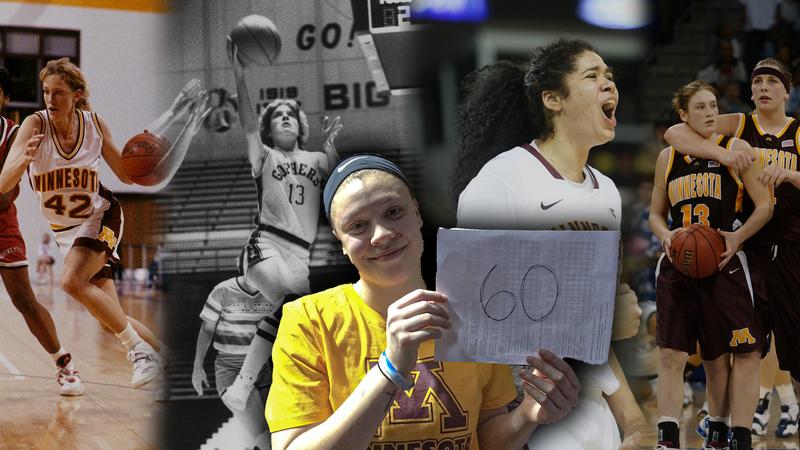 The University of Minnesota women's basketball program is rich in tradition and has an abundant of incredible and memorable moments. With the women's basketball summer workouts set to begin on June 13, we want to look back at some of the best single-game performances in team history.

Not a bad list including honorable mentions; but I'd also find room for Shae Kelley's Januaury 15, 2015 game in Columbus. Kelley's 29 points, 18 rebounds and 3 blocks led the Gophers to a 76-72 victory over the Buckeyes. Playing 39 minutes, she had to take up the slack when foul trouble limited Amanda Zahui to 23 minutes. Kelley did receive help from Mikayla Bailey who posted 16 points and 12 rebounds.

MINNEAPOLIS -- The University of Minnesota women's basketball program is rich in tradition and has an abundant of incredible and memorable moments. With the women's basketball summer workouts set to begin on June 13, we want to look back at some of the best single-game performances in team history. Here are five of the best, including some honorable mentions:

Debbie Hunter | 1981
Despite triple doubles being more common in women's basketball in 2022, it was 42 years ago when the Gophers saw their first triple double in program history. Sophomore Debbie Hunter (Cloquet, Minn.) registered one of the best performances in school history on on Jan. 31, 1981, against Northwestern. Her 21-point effort was matched with 12 steals, which still stands as the program record for a single game, while she also dished out 10 assists in the 87-83 victory over the Wildcats. The victory continued to help the surging Gophers' team that finished 28-7 that season under head coach Ellen Mosher Hanson. The 1980-81 team featured Minnesota legends such as Linda Roberts (St. Paul, Minn.) and Mary Manderfeld (New Ulm, Minn.) and Marty Dahlen (Mabel, Minn.) and finished the season ranked No. 18 in the nation and won the program's first (unofficial) Big Ten Tournament while also reaching the AIAW National Tournament.

Lindsay Whalen | 2004
As many Gopher faithful will know, Lindsay Whalen (Hutchinson, Minn.) led the Maroon and Gold to the program's first Final Four back in 2004. It was the performance in the opening round of the NCAA Tournament at Williams Arena against UCLA that could be argued to be one of the toughest showing in team history. After breaking her hand on Feb. 12, Whalen returned to the lineup for the first time on March 21, against the Bruins. Despite wearing a beige brace, Whalen was relentless throughout her 31-point and nine-assist performance. She got to the free throw line 14 times in the game, making 12 of them, and adding nine shots made from the floor. There are many stories from Whalen's performance, but the one that personifies Whalen's gutsy 31-points was in a sequence midway through the first half when she stole the ball from UCLA's Nikki Blue, raced the other way for a fast-break layup, got fouled and made a free throw. Blue answered with a 3-pointer, and then Whalen did the same on the other end. Jogging back, Whalen wiggled her healing right hand in the air, glancing at the fans as if to say, "I'm fine."

"I wasn't even thinking about the hand, to be honest," she said. "Just trying to get the crowd in it."

Amanda Zahui B. | 2015
There are record breaking performances, and then there's Amanda Zahui B.'s performance against No. 13 Iowa on Feb. 17, 2015. In a big-time rivalry game, the now WNBA star brought down a conference record 29 rebounds while scoring a career-high 39 points. In 39 minutes of action, the Swede committed just one foul and scored her 1,000th point during the game. For obvious reasons Zahui B.'s showing caught the attention of the masses. ESPN Stats & Info shared that the last time a NBA player had such a stat line was in 1979 by Moses Malone. Zahui B. summed up her game against Iowa in her usual, understated and unassuming style: "We had to win, and I'll do anything it takes for us to win."

Zahui B.'s 39-29 game was not an anomaly, she followed up that up with a 27-point and 27-rebound game just four days later in a double overtime victory over Michigan. Her incredible week helped her get featured on Sportscenter and get named espnW's National Player of the Week for the second time in the 2014-15 season that ended with a trip to the NCAA Tournament.

Carol Ann Shudlick | 1993
Minnesota has defeated a top-three ranked team three times in program history, but the first came on Dec. 18, 1993, when senior Carol Ann Shudlick (Kiester, Minn.) and the Gophers toppled No. 3 Texas Tech at the Pizza Hut Shocker Shootout. Not only was the victory monumental for the program, it stood at the time as the most points by an individual in Minnesota women's basketball history. Shudlick's 44 points sat as the Gophers' single game scoring record for 23 years before it was broken by Rachel Banham in 2016. Minnesota came into the game as an unranked team against the defending national champions, and led by Shudlick's eruption on the offensive end, the Gophers snagged a 92-82 overtime win with Shudlick scoring 12 in the overtime period alone. Shudlick's record-setting game also saw her snag eight offensive rebounds while shooting 18-of-27 from the floor. Shudlick went on to become the Big Ten's MVP that season and led the Golden Gophers to the NCAA Tournament where they reached the second round.

Rachel Banham | 2016
A star was born on Feb. 7, 2016. A star that still shines bright in the state of Minnesota with Rachel Banahm (Lakeville, Minn.) still playing professionally with the WNBA's Minnesota Lynx. An NCAA single-game scoring record that stood for six years came in a 112-106 double overtime victory over Northwestern on the road. The record shattered the program record by 16 points and the conference record by 11 points. Banham's nailed eight threes in her record-breaking showing, hitting 14-of-16 from the free throw line and scoring 18 points in the two overtime periods. Banham used everything in her well-stocked arsenal as she accounted for more than half of her team's points. There were step-back three-pointers, pull-up jumpers, scoop layups, plenty of free throws. Even when she was off, she was on by banking in shots from beyond the arc.

Banham is still one of two Big Ten players, men's or women's, to score 60 (Rick Mount of Purdue scored 61). Banham's legendary game left the blossoming superstar speechless in her postgame interviews, commenting, "I don't even have words for today. I'm shaking a little bit."

Banham went on to get praise from the masses after her win, getting congratulatory social media messages from basketball stars Kobe Bryant, Chiney Ogwumike and more. She took the famous Wilt Chamberlain picture after the game, holding up the box score of the game with a big 60 written on the back and ended the day by shouting out her inspirations Stephen Curry and Kobe Bryant.

I'd say Janel's 20 points and 18 rebounds vs Duke in the elite eight should have at least been honorable mention.

The University of Minnesota women's basketball program is rich in tradition and has an abundant of incredible and memorable moments. With the women's basketball summer workouts set to begin on June 13, we want to look back at some of the best single-game performances in team history.

Not a bad list including honorable mentions; but I'd also find room for Shae Kelley's Januaury 15, 2015 game in Columbus. Kelley's 29 points, 18 rebounds and 3 blocks led the Gophers to a 76-72 victory over the Buckeyes. Playing 39 minutes, she had to take up the slack when foul trouble limited Amanda Zahui to 23 minutes. Kelley did receive help from Mikayla Bailey who posted 16 points and 12 rebounds.
Click to expand...

The disconnect between the Gophers’ cavalcade of stars and lack of team success is striking. For a team with 0 Big Ten titles, the worst aggregate Big Ten Tournament record, and only 6 AP Poll finishes, the Gophers have an amazing collection of college superstars.