Minnesota defeats Northwestern in OT. The Gophers are 2-1-1 in the B1G

Minnesota defeats Northwestern in OT. The Gophers are 2-1-1 in the B1G
Click to expand...

All 3 goals were on volleys.

How often does that happen?

Stefanie Golan has built a good program at the U. They had a low water mark last season (mostly due to youth imo), but look like they're back to being their regular, highly-competitive selves.

Looking forward to seeing what they can do the rest of 2021 while heading forward towards (hopefully) a full season next year. 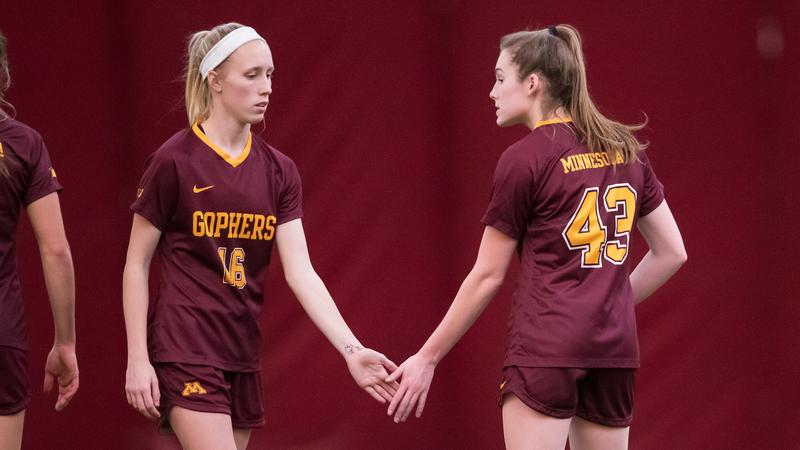 Gophers Rise to Fourth in Big Ten Standings With Draw vs. Illinois - University of Minnesota Athletics

The Minnesota Soccer team came away with a draw against Illinois after playing double overtime on Saturday night despite out-shooting the Illini, 23-2.

It was the dreaded nil-nil overtime draw versus Illinois. Gophers are 4th in the B1G. Penn State, Rutgers and Wisconsin are each 3-1.

The Minnesota Soccer team came away with a draw against Illinois after playing double overtime on Saturday night despite out-shooting the Illini, 23-2. With the result, the Gophers are now 2-1-2 on the season and sit in fourth place in the Big Ten Conference.

Once again, the Maroon & Gold dominated the game wire-to-wire in terms of offensive opportunities. On top of holding an overwhelming advantage in shots, Minnesota put nine shots on target as opposed to just one from Illinois. The Gophers saw 10 corners throughout the game, while the Illini totaled four corners.

McKenna Buisman, Sophia Boman, Katie Duong, Katie Koker, Sadie Harper and Celina Nummerdor all recorded multiple shots for the U. Boman and Nummerdor led the way in terms of shots on target with two and four, respectively
Click to expand...

A Sophia Boman rocket from outside the box gives the Gophers all the scoring they need in Iowa City. Minnesota defeats Iowa 1-0. 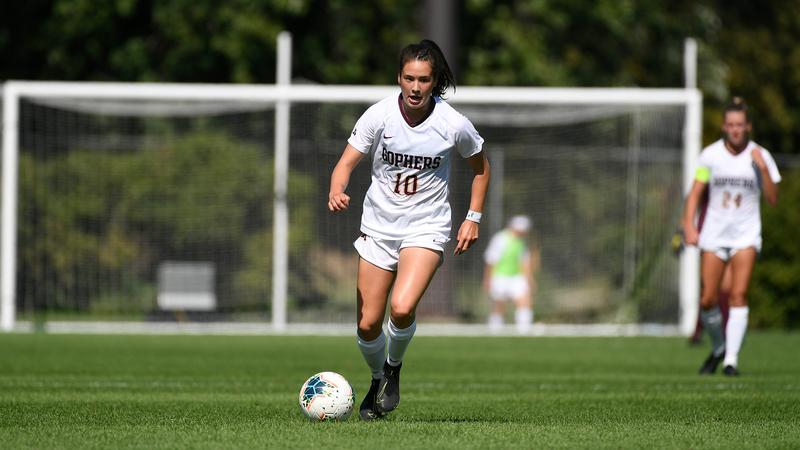 Minnesota battled for 90 minutes against No. 11 Penn State in University Park on Thursday afternoon, but ultimately came up short, 3-0.

Quotable
"I am disappointed in the result for sure," head coach Stefanie Golan said. "Our kids played their hearts out, but Penn State was opportunistic, which great teams are. We took too many shots from distance and didn't show enough composure and willingness to take risks in the final third. We will learn from this one and go again on Sunday."

Up Next
Minnesota will remain on the east coast through the weekend, as the Gophers wrap up their 2021 road slate with a matchup against No. 21 Rutgers on Sunday, March 21. Thereafter, the Maroon & Gold return home for the final three games of the season against Purdue (March 25), Maryland (March 28) and Wisconsin (April 3).
Click to expand...

With about 8:00 minutes remaining a Delaney Stekr free kick from midfield finds Sophia Boman in the box for the game winning goal versus Purdue.

Ignatius L Hoops said:
With about 8:00 minutes remaining a Delaney Stekr free kick from midfield finds Sophia Boman in the box for the game winning goal versus Purdue.

In the first three minutes a Katie Duong pass frees McKenna Buismann for a goal and the Gophers defeat Maryland 1-0.

This team has a lot of pieces to be really good. But they need a proven goal-scorer up-top and they seem not to have one. As a result, they control lots of play against basically everybody, but have produced few goals due to the lack of a finisher.

If they can find somebody that is reliably productive in front goal, they'll be a force. Everything else looks good imo.

Are tickets available to the home finale vs Wisc, this coming Saturday? Or how does that work?

Sounded like a fair number of fans in attendance for that highlight Ignatius posted.


@MRJ @Ignatius L Hoops if you know the answer or a link to it, please and thank you!

MplsGopher said:
Are tickets available to the home finale vs Wisc, this coming Saturday? Or how does that work?

Sounded like a fair number of fans in attendance for that highlight Ignatius posted.


@MRJ @Ignatius L Hoops if you know the answer or a link to it, please and thank you!
Click to expand...

They have announced that they aren't selling general public tickets for any home games/meets/matches for the remainder of this year. With limited capacity, tickets are going to the players, coaches, etc., so I think your options are to tap one of those sources or wait until next season.

A spirited match versus Wisconsin ends 1-1. A Badger goal early in the second half was immediately answered by Abi Frandsen. 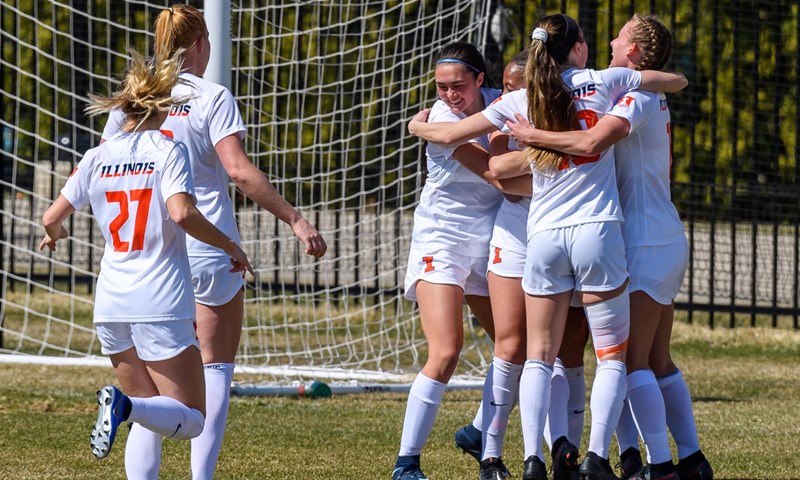 In the Big ten tournament, Minnesota opens against Nebraska in the Illinois regional on April 8. If the Gophers win, they play the winner of Illinois and Iowa.

During the season, Minnesota posted scoreless draws against Nebraska and Illinois. The Gophers defeated Iowa 1-0.

The Big Ten Conference unveiled the postseason schedule for its 2020-21 women’s soccer season on Saturday night following the conclusion of regular season play.

All 14 teams will compete in a single-elimination Big Ten Regional Weekend on April 8 and 11 at four campus sites. The winning team at each of the four regional locations will advance to the four-team Big Ten Tournament, to be played on the campus of the highest-remaining seed following the Regional Weekend. The Big Ten Tournament semifinals are set for April 15, with the tournament championship game scheduled for April 18. Game times and television coverage for all Big Ten postseason women’s soccer games will be announced at a later date.

For the Regional Weekend, the schools are seeded and assigned to their regional sites based on the same divisional alignment used during the Big Ten football season.

One set of East regional games will be played at Penn State’s Jeffrey Field and Ohio State’s Jesse Owens Memorial Stadium. As the top seed in the East (and the Big Ten Champion), Penn State will receive a bye in its first game and will play host to the April 8 matchup between East No. 4 seed Indiana and East No. 5 seed Michigan. The winner of that game will face Penn State on April 11.

The other East regional site will feature two games on April 8 in Columbus, as No. 2 seed Ohio State takes on seventh-seeded Maryland, and No. 3 seed Rutgers battles sixth-seeded Michigan State. The winners of those two games will square off at Ohio State on April 11.

Wisconsin is the top seed in the West and will receive a bye in its first game, while also playing host to the April 8 game between West No. 4 seed Northwestern and No. 5 seed Purdue at the McClimon Soccer Complex in Madison. The Badgers will take on the winner of that game on April 11.

The other West regional will be played at Illinois’ Demirjian Park, with the April 8 games featuring the second-seeded Fighting Illini against No. 7 seed Iowa, and No. 3 seed Minnesota taking on No. 6 seed Nebraska. The winners will advance to an April 11 matchup, also in Champaign. 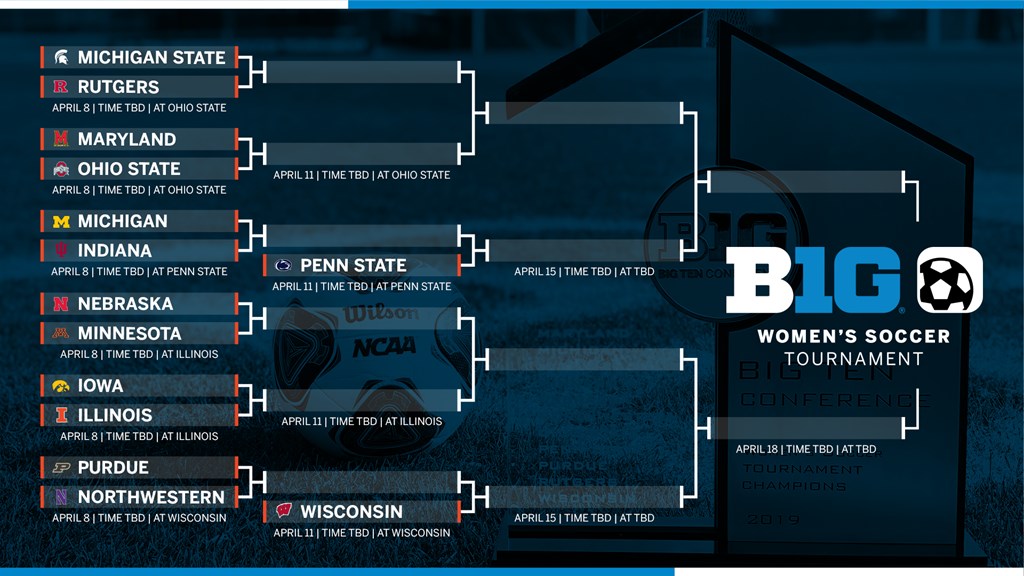 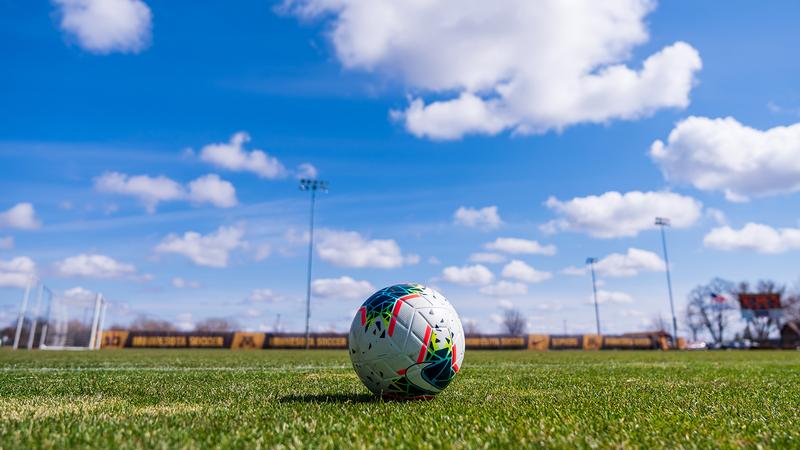 Minnesota vs. Nebraska Deemed No-Contest; 'U' Advances to Sunday - University of Minnesota Athletics

Thursday's Big Ten Regional Weekend game between Minnesota and Nebraska has been deemed a no-contest. Minnesota will advance to face the winner of Iowa vs. Illinois on Sunday, April 11.

Thursday's Big Ten Regional Weekend game between Minnesota and Nebraska has been deemed a no-contest, as mutually agreed upon by both teams due to health and safety concerns in the Nebraska program. This decision was made out of an abundance of caution and after consultation with medical experts.

Minnesota will advance to face the winner of tonight's game between Iowa and Illinois on Sunday, April 11 at Demirjian Park in Champaign, Ill., with the kickoff time to be determined. The game will be streamed live on Big Ten Network+.

The winner of Sunday's game will earn a berth at the 2021 Big Ten Tournament, scheduled for April 15-18.

Statement from Minnesota head coach Stefanie Golan
"Our thoughts are obviously with the Nebraska student-athletes, coaches and staff. This year has been so unique and challenging for every team and this is certainly not the way that Nebraska wanted their season to end and this is not the way that we wanted to advance. We wish those affected in Nebraska's program a full recovery and we will now turn our focus to the winner of tonight's game between Iowa and Illinois."
Click to expand...

The Hawkeyes took down Illinois 2-1 a couple of minutes into the first OT. It will be Minnesota versus Iowa on Sunday in Champaign.

An error in the first minute put the Gophers down 1-0. A second Hawkeye go gave Iowa a 2-0. lead.

Ignatius L Hoops said:
An error in the first minute put the Gophers down 1-0. A second Hawkeye go gave Iowa a 2-0. lead.