Stats for Liberty so far this season.

Liberty University is in the ASUN conference. That is not one of the Power 5 conferences.

However, Liberty went 28-5 last season and won in the first round of the WNIT Tournament.

Minnesota has the advantage and yet Liberty is not a push over. 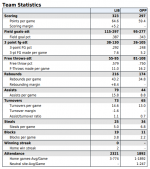 I would really like to see a bounce back win, double digits would be even better. They have to cut down on the turnovers and limit the opponents offensive rebounds to do so. Go gophers!

If you have directv you can watch this game on 788 channel.

gophersfan said:
If you have directv you can watch this game on 788 channel.
Click to expand...

thank you for the heads up!

Katie is looking more compose, Odberg is getting them nothing thus far

Must be a curse? Whoever runs point in this program turns it over. Decent first half though need to board better…

Happy to see the team is still leading by 10 with Mara having an off shooting night. Anyone watching, is Mara taking bad shots or is she getting good looks and just not getting them to fall?

adamj95 said:
Happy to see the team is still leading by 10 with Mara having an off shooting night. Anyone watching, is Mara taking bad shots or is she getting good looks and just not getting them to fall?
Click to expand...

I think she's getting good looks.

Not watching, but following the radio and live stats. Seems like the biggest key to Minnesota pulling away has been evening up the rebounding numbers in the second half. Really limiting those Liberty offensive rebounds, and pulling a few of our own has been a big difference. Nobody is talking about that.

Liberty is a good rebounding team and Minnesota finished even in rebounds at the end.

The stats speak for themselves. Great work! 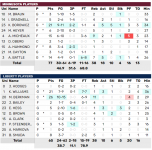 Two of the few concerns from this game were Rose fouling out and her moving gingerly after being clipped in a later game pile up.

Ignatius L Hoops said:
Two of the few concerns from this game were Rose fouling out and her moving gingerly after being clipped in a later game pile up.
Click to expand...

my other one would be only getting Mara ONE shot in the 2nd half.. hopefully her ankle is okay.. we really didn't look to get her going at all.. I know she struggled 1-10..

Katie with a nice bounce back game.. finished with 21/4/5 and 5 steals

Only 13 turnovers today, much better. Big game from Katie today, love the 5 steals. Also like the numbers for Battle today with 14 pts, 7 rbs, and 5 assists. Overall a solid win against a team they should beat. On to the next game, still lots to improve on.

Great game. Out rebounded at the beginning but got tough later on. Everyone contributed. Good team win. Lots of great plays. Better defense.

I don't believe Maggie returned yesterday after a hit to head. Hopefully, we'll see her back soon.

Ignatius L Hoops said:
In the post game Lynette said Czinano did not play because of injury
Click to expand...

I hope she isn't out for long, she's been playing so well this season.

adamj95 said:
I hope she isn't out for long, she's been playing so well this season.
Click to expand...

Maggie got hurt yesterday and didnt return so I'm not too surprised there but she was in the video from shootaround this morning so I'm guessing its nothing too bad.

She looked fine today, just an off night shooting I think.

whalenfan said:
She looked fine today, just an off night shooting I think.
Click to expand...

well yesterday she was attacking the basket for rebounds and had 10.. only had 2 today.. and we really didn't look to run much for her.. so just wondering if her ankle wasn't 100% 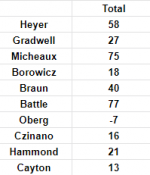 Katie was much better today but she started off with some bad habits early in the game with her turnovers and an attempted circus shot in between 2 defenders, needless to say it didn't make it to the rim and resulted in a Liberty ball. She also attempted an early long 2 (that missed) early in the shot clock, I would have been fine with it if it was from 3, she was wide open but I don't like long 2s early. I really am quibbling a bit here pointing these out after such an overall fantastic performance but these are the things that will prevent her from being on one of the all conference teams and from starting all season. As some others have suggested, I would like Katie to come off the bench. But after today, I am good with her starting too. I love the intensity Katie brings to the game and often feel that is better coming off the bench but that probably depends on the situation and how the team has practiced during the week. In the end I am good with either Katie or Battle starting depending on the circumstances but I would like to see Battle get a few starts sometime this season to see how that might change things.

Rose has been great and will continue to be great, I really look forward to seeing her FG% increasing as the season goes along, getting some more assists and improving her defense in the post. Still, she is already very good at scoring and rebounding.

Heyer, off night shooting for her but she had 0 turnovers in 27 minutes.

Gradwell does a real nice job with her limited minutes taking care of the ball, rebounding, passing and defense. Her shot is still not great but has to be respected by the opposition.

Braun had 0!!! turnovers in her 33 minutes! Just an off night shooting for her along with Heyer. Nice when 2 of your starters can have such tough nights offensively and you still win. Braun also only had 2 rebounds no assists and no steals so she wasn't on distributing or defensively either (besides her 1 block).

Battle was awesome again filling the stat sheet, she just needs to get worse at filling the TO column. 4 TO is still too many to go with 5 assists, 2 games in a row with so many TOs when she seem a lot more dependable with the ball in earlier games.

Hammond was in there a lot today (16 minutes) with Czinano out of the game. She did a nice job scoring with 8 points and no turnovers and only 1 rebound. She is definitely looking more comfortable after the move from JC to high level D1 ball.

Cayton did a great job bringing energy, assists and defensive intensity and the occasional bucket with her limited minutes (11).

Oberg was just fantastic again passing and has a nice (although very flat) shot when she can get it off. She struggled getting rebounds today against such a big team.

I was very happy with our inside scoring especially relative to Liberty. We had 48 vs. 40 while having a size disadvantage. I was also thrilled that our rebounding improved in the second half so that we out rebounded them significantly.

Overall, I can definitely see the improvement game to game and I hope it continues.

My favorite stat of the day and what describes Katie's best attribute, Intensity! How often does a 5'6" player get a block.... not very often.

Ragnor said:
My favorite stat of the day and what describes Katie's best attribute, Intensity! How often does a 5'6" player get a block.... not very often.

Getting a block was cool. Going back a few years, Perhaps Katie can match Northwestern's 5'4" Ashley Deary. Deary had 23 career blocks; more important, Deary made nearly 400 steals during her career. Katie's not at that level; but the ability to make steals and threes at key moments is beginning to define her play.

Roland Brooks said:
Must be a curse? Whoever runs point in this program turns it over. Decent first half though need to board better…
Click to expand...

You must have missed the Virginia game when she had 5 turnovers. Battle is awesome! but still making freshman mistakes too.