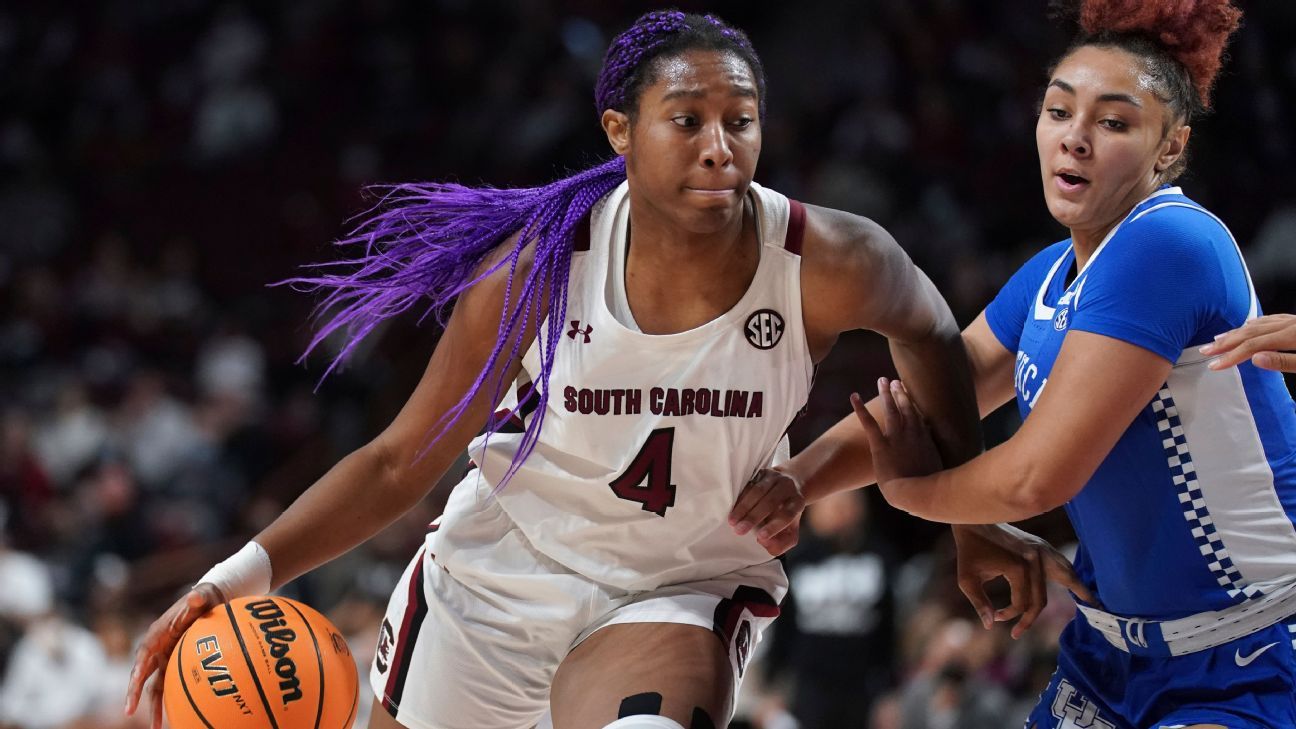 ESPN's updated list includes a new (and unanimous) No. 1 and seven players who weren't on our preseason ranking.

Just as she did during her incredible freshman campaign, Clark is once again making her case as the best player in college basketball. Clark's uncanny knack for finding the bottom of the rim is matched by an equal ability to distribute the ball and put her teammates in the best positions for success. She's tied for first in the country in scoring and ranks fourth in assists per game. The only player in college basketball with multiple triple-doubles this season, Clark recently became the fastest player in Big Ten history to reach 1,000 points (40 games). We've already seen Clark score a career-high 44 earlier this season. If she gets her rhythm back from behind the arc (shot 40% last season and is at 24% in 2021-22), who knows what scoring mark could follow. -- Sean Hurd

One of the more shocking parts of Michigan's season so far is that Hillmon has made only 55.9% of her shots. One of the elite offensive post players in the country, it seems like every shot Hillmon takes is going in. She just makes it look that easy. The reigning Big Ten Player of the Year ranks fourth in the conference in both scoring and rebounding, and that shooting percentage is still good for fifth. -- Charlie Creme

A slew of injuries and an incredibly difficult schedule -- four games against teams currently ranked in the top six -- could have derailed the Terps' season. Instead, Maryland has remained in the top 10 and Owusu is a primary reason why. She is one of only two Terps to start all 16 games, and while her numbers are down a bit from last season, Owusu's game remains the ignition for the fifth-highest scoring team in the country. Her game is equal parts power and playmaking ability, and coach Brenda Frese trusts Owusu with the ball in her hands in crunch time. -- Creme

Last year we got a glimpse of the dominant player Reese could be for the Terrapins, despite much of her freshman season being derailed by a foot fracture. Reese's sophomore season thus far has served as a confirmation of that dominance. For a Maryland team that has battled injuries and adversity, Reese has been its most consistent performer. She has logged 10 double-doubles in 15 games and leads the Terps in points, rebounds, blocks and steals. Reese is particularly impressive in her proficient ability to get to the free throw line (third-most attempts in the country) and is an absolute powerhouse on the offensive glass. She leads the nation with 5.4 offensive boards per game. -- Hurd

Holmes has been a consistent and efficient force for No. 6 Indiana this season and throughout her career in Bloomington. She ranks fifth in the country in field goal percentage amongst players with at least 100 attempts. Holmes has recorded five 20-plus point games this season, shooting at least 64% from the field in each of them -- and three came against ranked opponents. Holmes is extremely effective in the pick-and-roll, and when she catches the ball in the low post, it's most likely a bucket for the Hoosiers. She has set single-game scoring career highs twice this season, most recently with a 30-point performance against Ohio State in December. We've also seen the beginnings of an expanded offensive game, hitting the occasional 3-pointer. -- Hurd

Clouden has steadily improved during her time at Michigan State and has her name in the record books with a program-best 50 points in a double-overtime loss to Florida Gulf Coast in December. She is shooting a career-best 46.4% from the field and finds ways to get open and get to the rim despite being the primary focus of opposing defenses. It has been a challenging season for the 8-7 Spartans, but Clouden has been a consistent bright spot. -- Voepel
Click to expand...