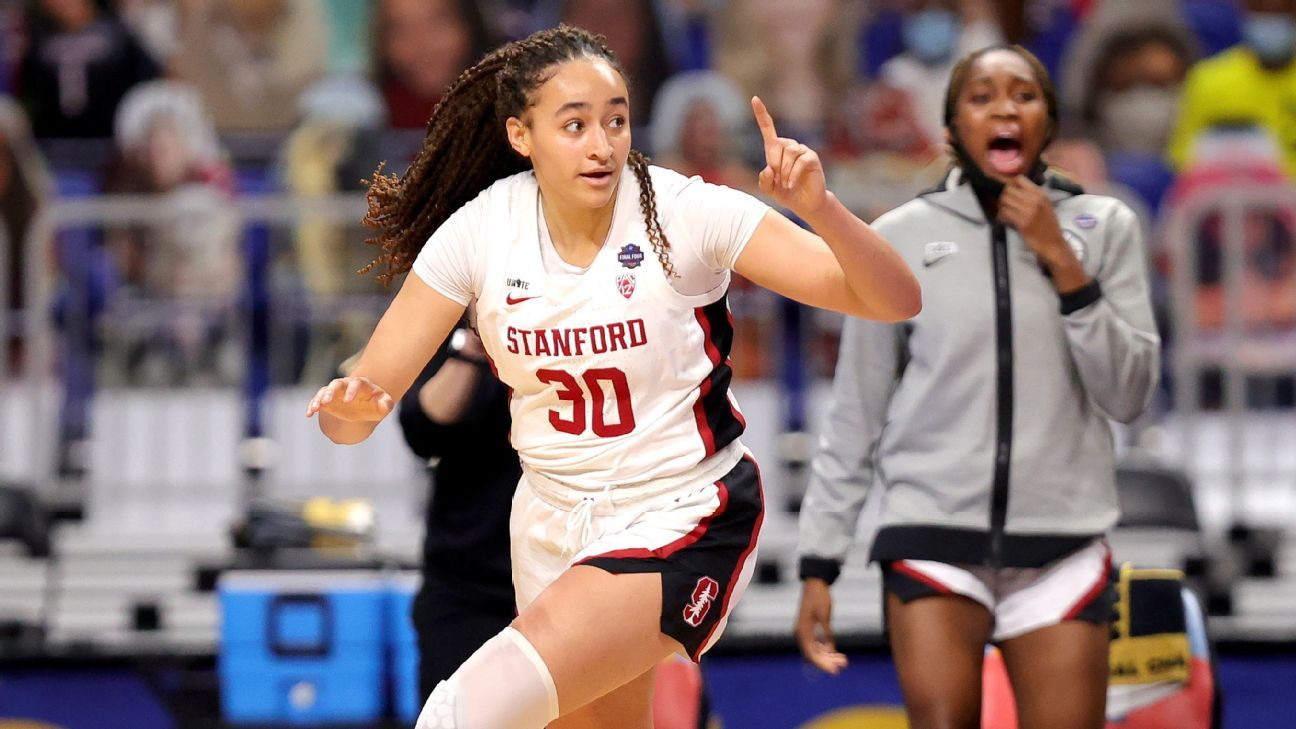 Can Stanford repeat? What's South Carolina's biggest challenge? What does UConn's starting five look like? Here are the storylines we'll be watching.

Here are the questions regarding the B1G:

How should we expect Caitlin Clark's game to have matured since last season? And will her Iowa Hawkeyes or the Maryland Terps have the top offense in the Big Ten?

Voepel: With the ball in her hands, Clark was magical as a freshman, both in her scoring (led Division I at 26.6 PPG) and distribution (second in the nation at 7.1 APG). Two things are probably next in her evolution: playing off the ball a little better and improving her defense.

The Hawkeyes are at their best when Clark is directing things, so we're talking about subtle offensive changes, not dramatic ones. Clark would be the first to say that a good part of her success had to do with having an automatic bucket like Monika Czinano to pass to, and she will have that again. Czinano shot 67.8% from the field last season, and she and Clark seemed to have instant chemistry.

The Hawkeyes were second in Division I in scoring last season at 86.1 PPG, and we'd expect that to continue. But Big Ten rival Maryland ranked first in the country at 90.8 PPG. The teams met for the Big Ten tournament title, and a strength vs. strength matchup turned into a 104-84 Terps victory.

Iowa lost in the NCAA Sweet 16 to UConn 92-72, while Maryland was upset by Texas 64-61 in the same round. Neither the Hawkeyes or Terps were able to maintain their offensive identities at that level of the NCAA tournament, mostly because they ran up against teams determined to make them seem one-dimensional (no defense).

Maryland is a former national champion (2006) and made the Final Four as recently as 2015. Iowa's only Final Four appearance was in 1993, long before any of today's players were born. They did, however, make the Elite Eight in 2019, but were no match for eventual champion Baylor.

The Terps come into virtually every season with the thought that if things go right, they could contend for another NCAA title. The Hawkeyes aren't there on a consistent basis, and it's unrealistic to expect them to be. But with a talent like Clark, the idea of a Final Four return is realistic. But the Hawkeyes know what they have to do differently than last season. With a lot of young talent, they have a real chance to grow into that kind of contender.

With Ohio State eligible again, is the Big Ten capable of breaking its own record of putting seven teams in the NCAA tournament?​

Creme: Thanks to players like Clark and Michigan's Naz Hillmon, plus the rise of Indiana, the Big Ten has experienced a rebirth. All three of those teams, plus Maryland, reached the Sweet 16. Seven made the NCAA tournament -- and had the Buckeyes not pulled themselves out of a potential bid with some self-imposed penalties, it would have been eight.

The league is still loaded at the top with the Terrapins, Hoosiers, Hawkeyes and Wolverines all in our preseason top 10. Each one could be better than they were a year ago, all with Elite Eight or Final Four potential. That might be the better measure of the conference this season because the fortunes of getting that eighth team in the NCAA tournament aren't as good.

Expect Michigan State and Northwestern to be there; the Spartans should improve on last season's No. 10 seed, while the Wildcats aren't expected to be as good as last season's 7-seed. Ohio State should also slide back into the field. Those are the seven teams.

Finding that eighth team is difficult. Rutgers was a No. 6 seed and finished third in the Big Ten standings, but the Scarlet Knights suffered massive personnel losses. The rest of the conference has just as much catching up to do. Nebraska, with the addition of Oregon transfer Jaz Shelley and the return of leading scorer Sam Haiby, should have the best chance to get the Big Ten to its record number of tournament teams. But because their nonconference schedule doesn't provide much resume-building material, the Huskers will need to score a few upsets of the teams near the top the conference to do it.
Click to expand...