Welcome to that most glorious time of the year, when we gather with family, stuff ourselves with food and then ungather from that same family, angrily stomping off to our own private corners of the house because we refused to endure the treasonous slander that our supposed loved ones just spoke about a place and a people that they damn well know we hold near and dear to our hearts.

When teams play the latest edition of games in which they have competed for a century or more. When schools fight for cups and buckets and other brass mementos that look like they came from the back shelf of a junktique store. When thousands of people pay hundreds of dollars to sit in the snow and lose their voices as they watch all that happen. And during this high holiest of college football weeks, that makes all the sense in the world.

But what really makes a rivalry a rivalry? What factors combine to take an annual game to a whole different level of intensity and fun? As it turns out, there are many to consider, and we've documented a few here.

So what's the best and strangest of Rivalry Week? Grab a turkey leg, read on and find out.

HONORABLE MENTION
Minnesota-Wisconsin: The real granddaddy of them all. This rivalry has had 131 meetings and was first played in 1890.

Paul Bunyan's Axe. It wasn't the first prize at stake for Minnesota and Wisconsin. Beginning in 1930, the rivals played for a slab of bacon, but the trophy -- actually a slab of black walnut wood with a carving of a football -- disappeared after the 1943 game, only to be found in 1994 inside a storage room at Wisconsin. Needing a replacement, Wisconsin's lettermen group, the National W Club, introduced the axe, named after the mythical Midwestern lumberjack and featuring Wisconsin cardinal and Minnesota gold on each side.

Scores of all the games lined the axe's handle until filling it, prompting the first trophy to be retired after the 2003 game, and donated to the College Football Hall of Fame. In 2004, the current axe debuted with a six-foot handle. Wisconsin won it that first year and didn't relinquish it until 2018, the longest win streak by either team in a rivalry dating back to 1890.

The most dramatic axe moments come when it exchanges hands. Players sprint across the field, grab the axe, congregate around each goal post and begin to chop. In 2013, Minnesota players tried to prevent the "chop" around their goal post, leading to an altercation. The following year, the axe was not kept in the bench area, but presented in the end zone, as Wisconsin won again.

"In the celebrations, you see the creativity come out," Wisconsin interim coach Jim Leonhard, an All-America safety/returner for the Badgers who went 2-2 in Axe games, told ESPN. "It's one of those trophies that everybody recognizes. It's been fun to be a part of it. It's never a good feeling to be on the losing side, but it really is an amazing experience to keep the axe or to run across to get it back from the other team." -- Adam Rittenberg
Click to expand... 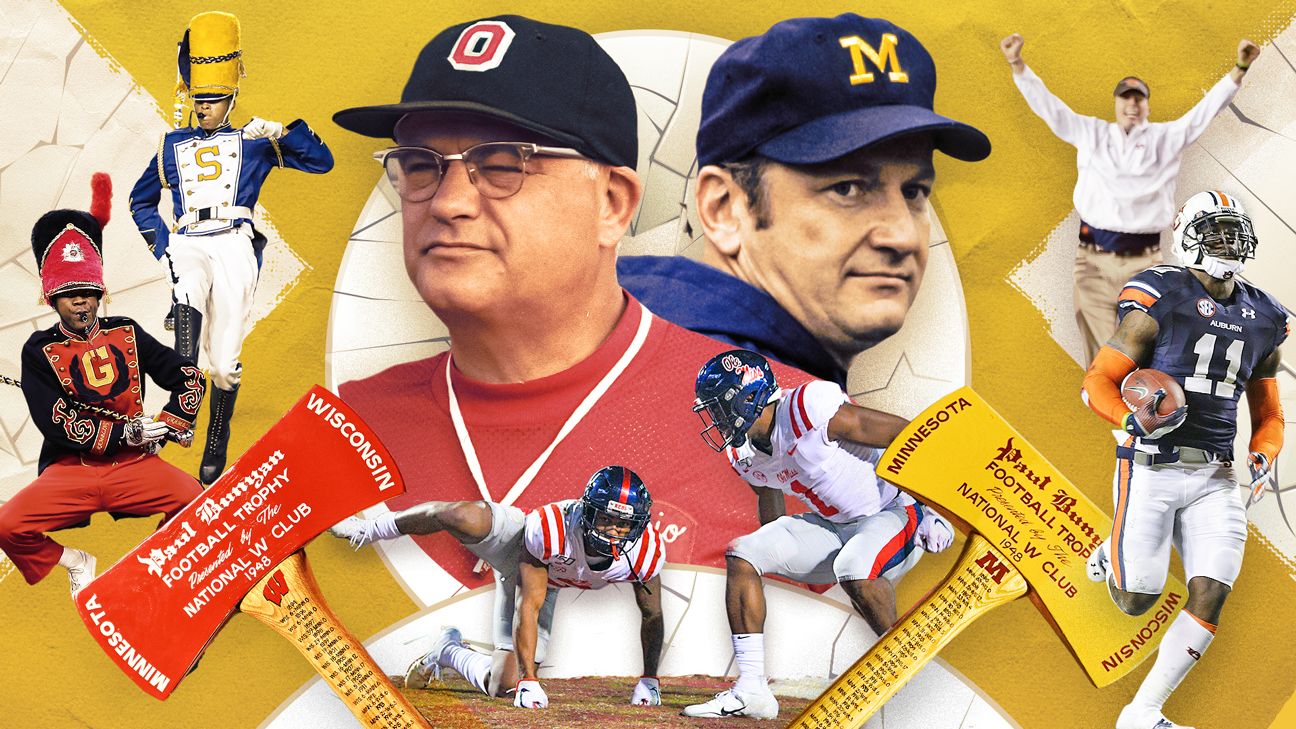 The Iron Bowl, The Game and beyond: What makes a perfect rivalry?

From bad blood and unforgettable moments to pageantry and unusual trophies, we look at the games and traditions that make Rivalry Week so great.

They break the rivalries down into categories.

Problem with our great rivalries is that Michigan isn't played enough and is one sided. Iowa and Wisconsin games typically lack both teams being ranked to draw more national attention.

One thing I think is unique about the Minnesota Wisconsin rivalry is that it seems like the only one with a real NFL counterpart. The border battle happens with the Gophers and Badgers as well as the Vikings and Packers. I can't think many other rivalries that have four fan bases as aligned as that.

Beat wisconsin and all is forgiven.

IceBoxGopher said:
One thing I think is unique about the Minnesota Wisconsin rivalry is that it seems like the only one with a real NFL counterpart. The border battle happens with the Gophers and Badgers as well as the Vikings and Packers. I can't think many other rivalries that have four fan bases as aligned as that.
Click to expand...

True. It's not like there's a Browns or Bengals rivalry with the Lions, unless we're tanking for draft picks