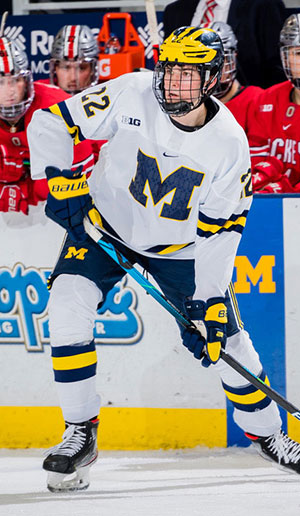 Changes: The most notable departees for Bob Motzko and the Gophers this offseason were forward Sampo Ranta and Scott Reedy. Ranta finished the season on a point-per-game pace, with 19 goals and 12 assists. Coincidentally enough, Reedy also averaged exactly a point per game, with 11 goals and 17 assists. The Gophers dipped into the transfer portal to add Colorado College’s Grant Cruikshank, a left-shooting forward with 10 points in 16 games last season.

Strength: Minnesota returns last season’s Richter Award recipient in goaltender Jack LaFontaine. LaFontaine finished last season with a .934 save percentage and 1.79 goals against average, both marks that led the Big Ten as the Gophers won the conference title. With a stout group of defensemen in front of him, it should be quite a challenge to break through against this team.

Weakness: With these Gophers, there’s not a lot of question marks you can point to on paper. If we’re getting nitpicky, you’d like to see them improve on the power play this season after posting a 17.7 percent success rate last season — well below the national average.

2021-22 Outlook: This is a group that will have its sights set on defending its Big Ten title and making a deep run in the NCAAs, and it has the pieces to do exactly that — and a big-time goaltender, which certainly helps in big games.

Replacing the production of Ranta and Reedy — two of the top-three point scorers from last season — could be tricky, but this is a team that can lean on its defense even if the goals aren’t flying in from all directions as they did last year.