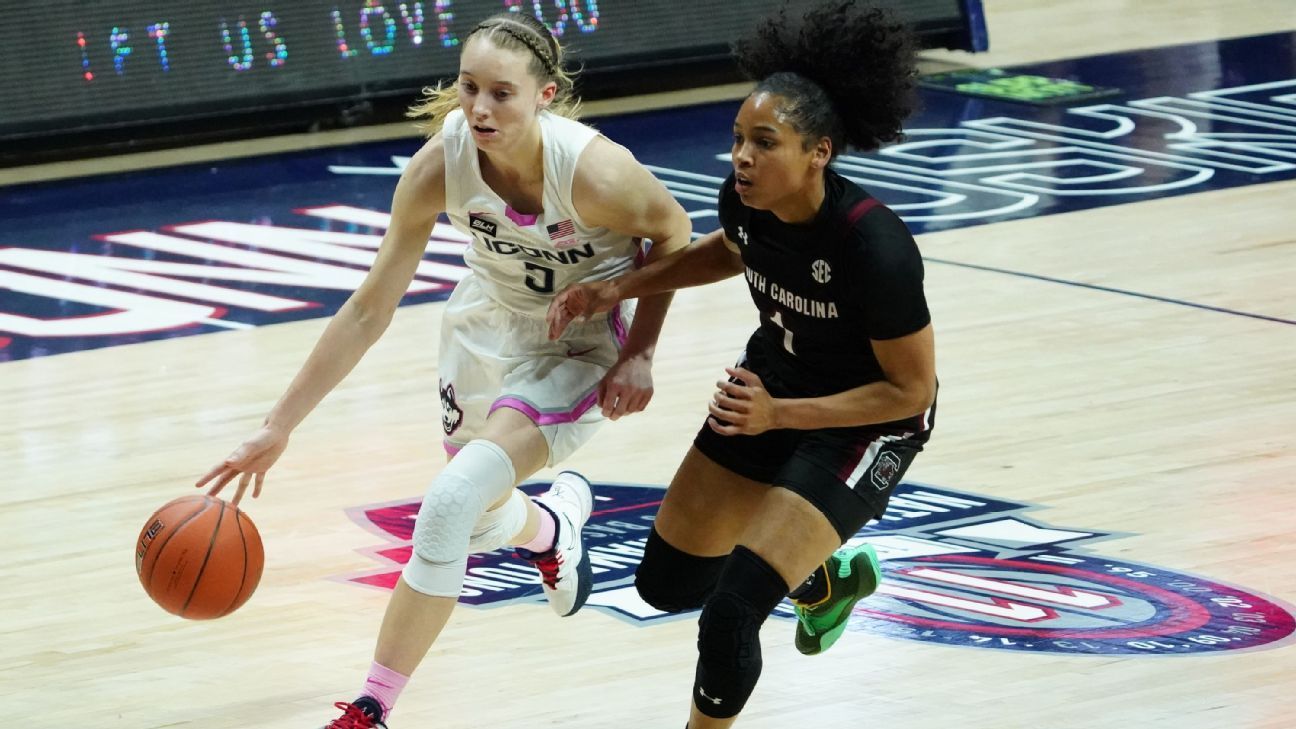 Why UConn starts at No. 1 in top 25 women's college basketball preseason rankings

Stanford is the reigning champ. South Carolina is No. 1 in the AP Top 25. But with perhaps the deepest roster in program history, UConn opens on top.

The B1G teams are:

With 96.1% of the nation's top-scoring offense returning, the Terps are once again the Big Ten favorites and a Final Four contender. Ashley Owusu (17.9 PPG, 5.9 APG) and Diamond Miller (17.3 PPG, 5.8 RPG) form one of the best backcourt tandems in the country. Throw in sharp-shooter Katie Benzan (12.7 PPG, 50.0% on 3-pointers) and Chloe Bibby (13.2 PPG, 6.0 RPG), and Maryland has a collection of guards who can score in every way possible. A full, healthy season from 6-3 sophomore forward Angel Reese (10.0 PPG in 15 games) will make the Terps even more potent. Maryland's top freshman, 6-2 Shyanne Sellers, is the kind of versatile wing that should fit into the Terps' style immediately.

Caitlin Clark garners so much attention from both the media and opposing defenses that it's easy to forget that the Hawkeyes also bring back the other four starters from a Sweet 16 team. Not that Clark (26.6 PPG, 7.1 APG) doesn't deserve all that notoriety; she led the nation in points per game (26.6), total assists (214) and made 3-pointers (116) as a freshman. But the sophomore guard gets huge help from Monika Czinano (19.3 PPG), who led the nation in field goal percentage (66.8), in the post and McKenna Warnock (12.0 PPG) and Gabbie Marshall (9.1 PPG) on the wing. If Iowa is going to challenge for a Big Ten title and a spot in the Final Four, the Hawkeyes will have to improve a defense that ranked last in the country in points allowed per game.

Coming off their first Sweet 16 appearance, the Wolverines could be primed for the best season in program history. Having Big Ten Player of the Year Naz Hillmon (23.9 PPG, 11.4 RPG, 62.3% from field) in the post is a good place to start. Senior Leigha Brown (18.2 PPG, 4.5 RPG) has improved each year, and her transfer from Nebraska before last season was a difference-maker for Michigan in 2020-21. The Wolverines somehow made their NCAA tournament run, which included a near upset of Baylor in the regional semifinals, without point guard Amy Dilk (7.7 PPG, 3.9 APG), but she's healthy and back for her senior season

Juhasz's departure for UConn leaves the Buckeyes without an experienced inside scorer, but Kevin McGuff's team is as deep at guard as any squad in the country. Juniors Jacy Sheldon (16.7 PPG, 48.6% from the field) and Madison Greene (13.4 PPG, 4.3 APG) have become the bedrocks of the program, and sophomore Kateri Poole (6.6 PPG) showed improvement toward the end of her freshman season. But senior leader Braxtin Miller's decision (11.5 PPG, 3.7 RPG) to come back for a fifth year, and sharpshooter Taylor Mikesell's transfer from Oregon, are the keys to the Buckeyes being able to contend in a competitive Big Ten.
Click to expand...