Brian Cosgriff, architect of Hopkins’ girls’ basketball rise, to take over at Minnetonka

Two years after stepping down following a highly successful stint at Hopkins, Brian Cosgriff is re-entering the head coaching ring.

Minnetonka announced Tuesday that it has hired Cosgriff to head its girls’ basketball program. Cosgriff coached the Hopkins girls to seven state championships in 21 seasons, compiling a record of 569-67 before exiting after 2020’s COVID-shortened season. He was inducted into the Minnesota High School Basketball Hall of Fame earlier this month.

He is replacing former head coach Leah Dasovich, who stepped down during the season amid accusations that a member of her team made racially offensive remarks. Dasovich coached Minnetonka to the Class 4A state title in 2016, beating Cosgriff and Hopkins 61-52 in the championship game.

Cosgriff is a physical education teacher at Providence Academy and was an assistant with the girls’ basketball team, which won the Class 2A state championship in March. That experience, he said, was a catalyst toward seeking another head coaching position.

“When we got to the state tournament with Providence, I saw a lot of familiar faces. It felt good to be back in [Williams Arena],” he said. “When the job opened up, a few people reached out to and wondered if I’d be interested. I talked it over with my family. It felt good to be wanted again. I decided to throw my hat in the ring.”

Cosgriff said his brother Barry, who remained at Hopkins as an assistant after he stepped down, will join him on the staff at Minnetonka. 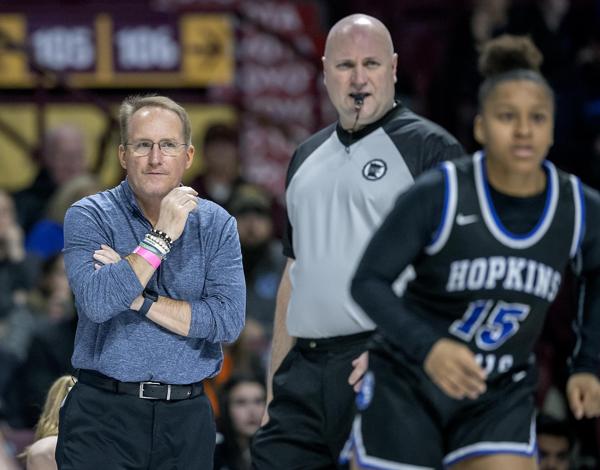 Brian Cosgriff, architect of Hopkins’ girls’ basketball rise, to take over at Minnetonka