At 89 (!), Willie Nelson is still a musical marvel at Palomino Festival

How many times you figure Willie Nelson has sung “On the Road Again” in the four decades since it came out?

Whatever the answer, the 89-year-old American musical legend still plays his signature song in a way that can surprise you — and surprise whoever’s playing it with him, as was the case Saturday night in Pasadena.

Dressed in black jeans and a black T-shirt, his hair in two long braids beneath a black cowboy hat, Nelson shuffled onstage halfway through Kacey Musgraves’ headlining performance at Palomino, a new music festival that brought the two of them along with Jason Isbell, Orville Peck, Zach Bryan, Old Crow Medicine Show and about a dozen more left-of-center country acts to the leafy grounds surrounding the Rose Bowl.

Nelson had finished his own set earlier without doing “On the Road Again,” so it was pretty clear what he planned to play with Musgraves, who introduced her fellow Texan as her “other grandpa” after noting that her “actual grandpa” was in the audience.

Yet for all the warning Musgraves and her band had, they still spent the next few deeply delightful minutes scrambling to keep up with Nelson’s wild and idiosyncratic phrasing as he sang about making music with his friends and plucked out a vinegary solo on the famously battered acoustic guitar he calls Trigger.

When the song was over, Nelson hitched up his jeans, hugged Musgraves, then hoisted Trigger in the air with a kindly smile as if to say to everyone onstage: “Good try, y'all.” 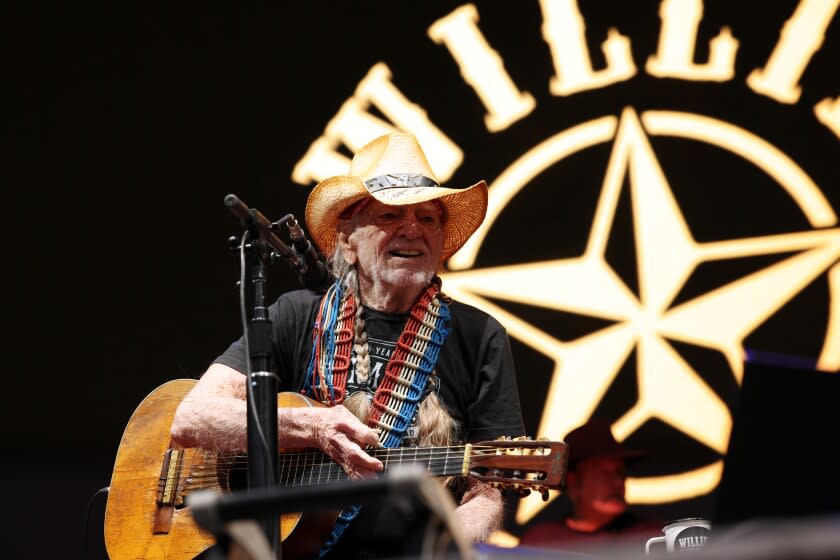 At 89 (!), Willie Nelson is still a musical marvel at Palomino Festival

Nelson played a free-ranging, dexterous set at the new alt-country fest, before joining headliner Kacey Musgraves for a singalong "On the Road Again."