Just read this in the Strib story:

"The Wolves hit so many shots — and were so focused on getting back in transition — they didn't record a single offensive rebound. The Spurs had just six fast-break points."

Phil isn't wrong on this one. KAT's immaturity is well chronicled. However, Phil is also a blowhard who lacks, substance, insight and perspective. Anything he says about the team should be discounted, even in this case. Relatively or comparatively speaking, KAT is one of the few guys on the team making at least some kind of an effort to get this new setup to work.

jamiche said:
Phil isn't wrong on this one. KAT's immaturity is well chronicled. However, Phil is also a blowhard who lacks, substance, insight and perspective. Anything he says about the team should be discounted, even in this case. Relatively or comparatively speaking, KAT is one of the few guys on the team making at least some kind of an effort to get this new setup to work.
Click to expand...

Most importantly they won the 3rd Quarter and they had 14 Offensive Rebounds. 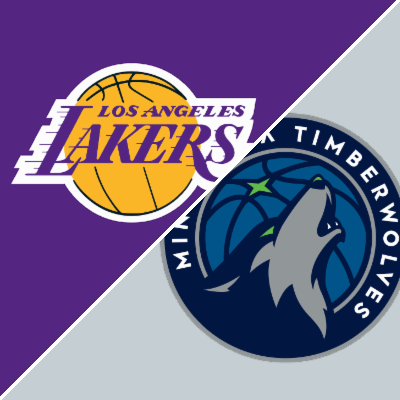 Visit ESPN for the box score of the Los Angeles Lakers vs. Minnesota Timberwolves NBA basketball game on October 28, 2022

Edwards ripping off Westbrook makes it all better…

Then Westbrook pees it down his leg next time he goes in against Edwards. Shit is priceless.

atsgopher said:
Edwards ripping off Westbrook makes it all better…

Then Westbrook pees it down his leg next time he goes in against Edwards. Shit is priceless.
Click to expand...

I think I can forgive the refs for the foul call on that play. It's like the bad call on Edwards on the dunk last year. You almost can't believe he actually did it, or frankly that it's even possible.

Without Davis, Minnesota used its twin towers of Gobert and Towns inside. Damian Jones started for Davis, but Gobert had his way early with six points and four rebounds as the Timberwolves built a nine-point advantage in the first quarter.

With its focus inside, Minnesota scored 46 points in the paint for the game.

Lakers: Coach Darvin Ham said Davis woke up Friday with the low back tightness and the team decided to take a cautious approach. Ham was hopeful Davis will be able to play when the team returns home and hosts Denver on Sunday. Friday was the first missed game of the season for Davis, who is averaging 24 points and 9.5 rebounds this season. ... Westbrook passed Robert Parish for 29th on the all-time scoring list with 23,335 points on a second-quarter free throw. ... Los Angeles had a season-high 55 rebounds, including a season-high 12 offensive boards.

Visit ESPN for the game recap of the Los Angeles Lakers vs. Minnesota Timberwolves NBA basketball game on October 28, 2022

The calls that the lakers get are criminal. The refs did everything they could to get them their first win.

Gobert cleans up a lot of slop on both ends. He’s been big so far.

The number of replays and the length of the replays last night was ridiculous.

It's shocking to me that LA probably could have dumped Westbrook off on another team if they hadn't demanded a return. That team would be better if they replaced him with Gaston Diedhiou. Do you know how unlikeable you have to be to make me (in moments of weakness before I come to my senses) feel bad for Lebron and AD? He literally pouts because he can't shoot.

It was a nice win.

On a side note, I really dislike how KAT is trying to be something he isn't this year. I think he is actively chasing assist numbers. He should just focus on defense and being an elite scorer. The guy really has that "rasied by Grandma" energy. He doesn't know who he is, he whines constantly, I think he thinks that comment on Ants diet made him sound like a leader.

Chris Finch? If you ever stop by, one suggestion. Quite trying to double team the ball! Oh and have Edwards hit some bloody shots too.
Last edited: Oct 30, 2022

Stop the ball in transition. My goodness that is the first thing taught in basketball.

From the Parkinglot said:
Stop the ball in transition. My goodness that is the first thing taught in basketball.
Click to expand...

First of all, get this f-----g point guard the hell out of here. NO defense to speak of. NONE

Holds the ball, probes around, forces up shots, no ball movement, and soft as a babies ass. Just get him the hell out of here.

Ant can't make a thing, so he is pouty and not playing defense.

Our pg, 2, and SF have sucked balls this whole game. Defensively and offensively.

I'm so disappointed in what I see this year.

All add up to a losing night. Something that getting more steals, having fewer turnovers couldn't overcome and more Offensive Rebounds couldn't offset.

(Edit: The Wild are going into O.T. against Chicago. It was 3-3 after regulation.)

I would trade DLO for Westbrook tomorrow. Westbrook at least plays with attitude and would at least try.

I'd do it in a heartbeat.

I'd also add that you should not look at the upcoming schedule.
Last edited: Oct 30, 2022

Wild win in a shootout.

Glad to see the wolves have national games coming up Tuesday and Friday. Put this garbage collection of mismatched toys on full display to show their failings.

Edwards proved his immaturity — and that's the kindest thing to say about it — with that gay-ridiculing video he decided to share with his social media followers.

And there's ongoing immaturity on the court, often in winning time. Edwards should be using those seconds where he's holding the ball to do what he does best … getting to the basket.

He has remarkable body control on his drives. He doesn't run over defenders in those tightest of quarters; instead, he makes use of an outstanding left hand.

Edwards would rather fire the three, though, which has a greater chance to keep opponents alive in the final minutes than it does to make him the game-clinching hero.

One thing about the Ant: He's always aware of how many points he's sitting on. He missed the second of two free throws with seven seconds left Friday, giving him 29 points, not 30.

Who cares? Well, Anthony did, by the angst-caused smile on his face.

I was talking Wolves with Terry Kunze, a basketball professor if there's ever been one, last spring and he offered this aside that precisely mimicked my view of Anthony:

"Every time Edwards takes a jump shot, I think he's going to miss."

He's actually OK on threes, 35%, but with games still waiting to be won, and him holding the ball on the wing, with that gleam in his eye … aargh!

Edwards is too much of a product of the modern NBA. It's ridiculous that he's taking 44% of his shots from three-point range.

Too bad it isn't still nightly combat, with the three as just a small respite from hard fouls and bad boys, because the Ant with what he does best would've been great at that game. 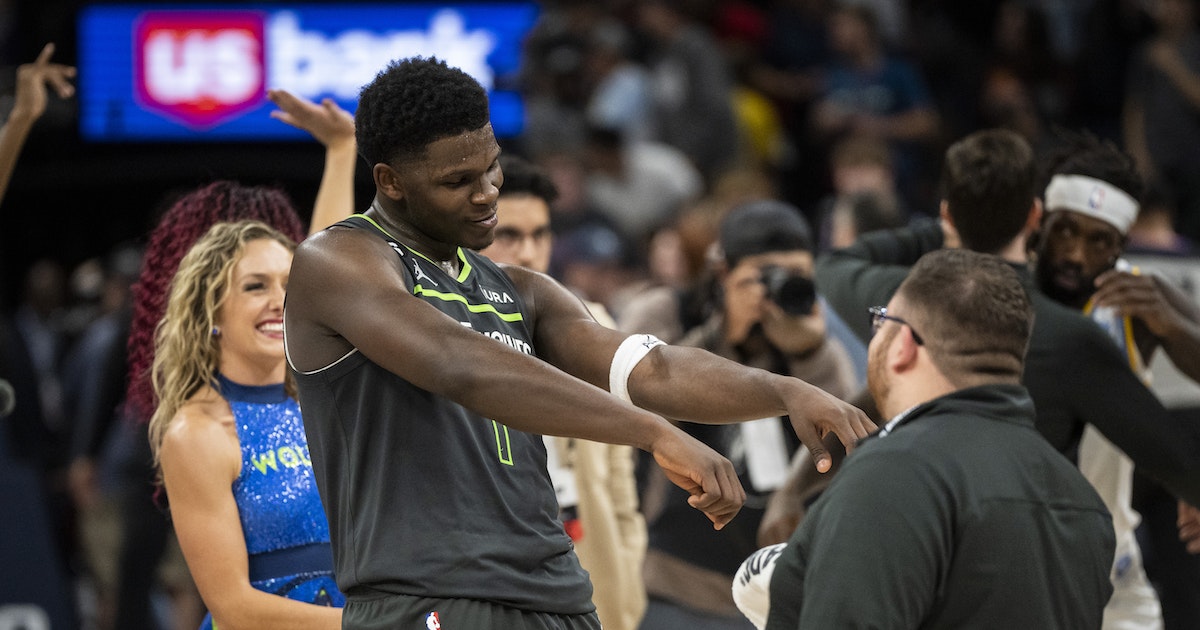 The young Timberwolves star is a product of the modern NBA, and that means he's not taking enough advantage of his ability to get to the basket.

RandBall: Timberwolves still have a D'Angelo Russell problem to solve

After all that changed for the Timberwolves this offseason, and after all the chatter of other changes that might have happened, they settled into the start of this season with the same plan at point guard: D'Angelo Russell, for better or worse.

He finished last season on the bench, with Jordan McLaughlin playing crunch time minutes in a tight playoff elimination game against Memphis. Russell also willed the Wolves into that series with a dynamic play-in game against the Clippers.

Russell takes a maddening amount of contested jumpers and looks to be the hero late in games. Then again, he is one of the best in the league at making those crunch time shots.

As the Wolves have started 4-3 this season against what seemed to be a soft schedule — decent, expectedly clunky or ugly depending on how generous you feel — there is plenty of room for improvement in a lot of areas.

In a reversal from last season, when the Wolves' fortunes rose and fell with Russell's performance, they enter Tuesday's game at Phoenix with Russell having played significantly worse in wins than losses.

If we can acknowledge that Russell has his moments, seems to have some chemistry with new big man Rudy Gobert and at the very least is not the only concern for the Wolves to work through, it still leaves us with this:

How patient should the Wolves be with their current plan, and what are some options if they run out of patience? 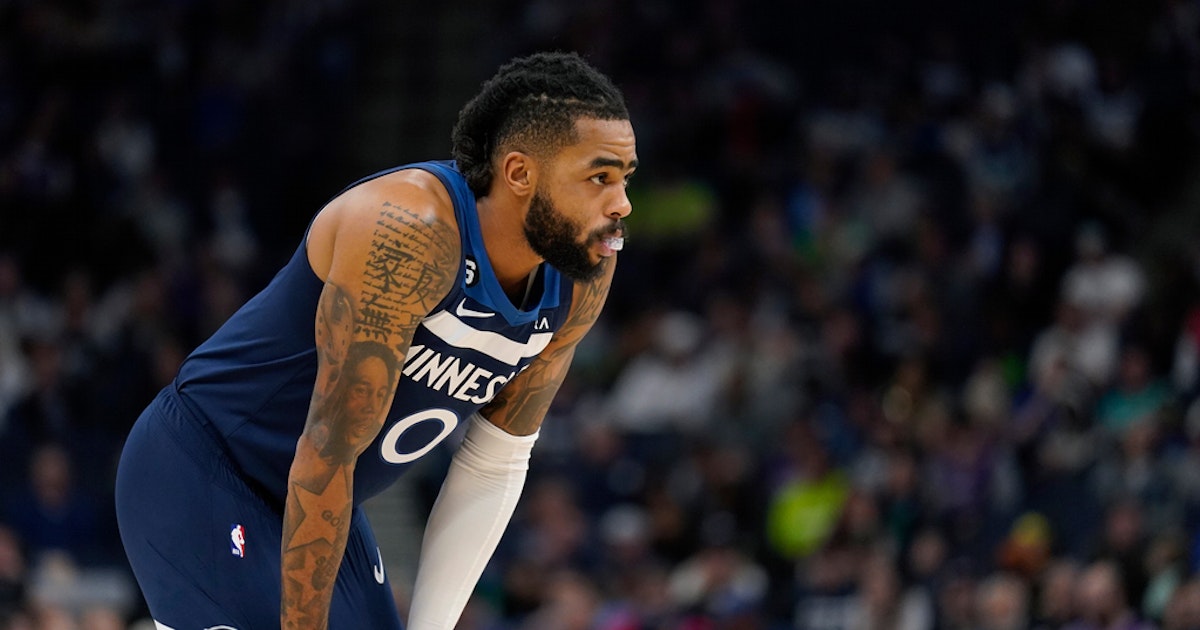 Timberwolves still have a D'Angelo Russell problem to solve

He's been a conundrum for years, and that hasn't changed.

Suns update: Despite having the league's best record, the Suns lost in the second round of the playoffs to Dallas last season. They are off to a hot start again, as they are 5-1, including 4-0 at home.. … C Dandre Ayton (left ankle sprain) is out. He averages 17.2 points and 10.2 rebounds per game. … G Devin Booker leads the team at 26.8 points and G Chris Paul averages 10.8 assists. … Phoenix is fifth in the league in points per game (114.8) and has the eighth best defense (107.3). 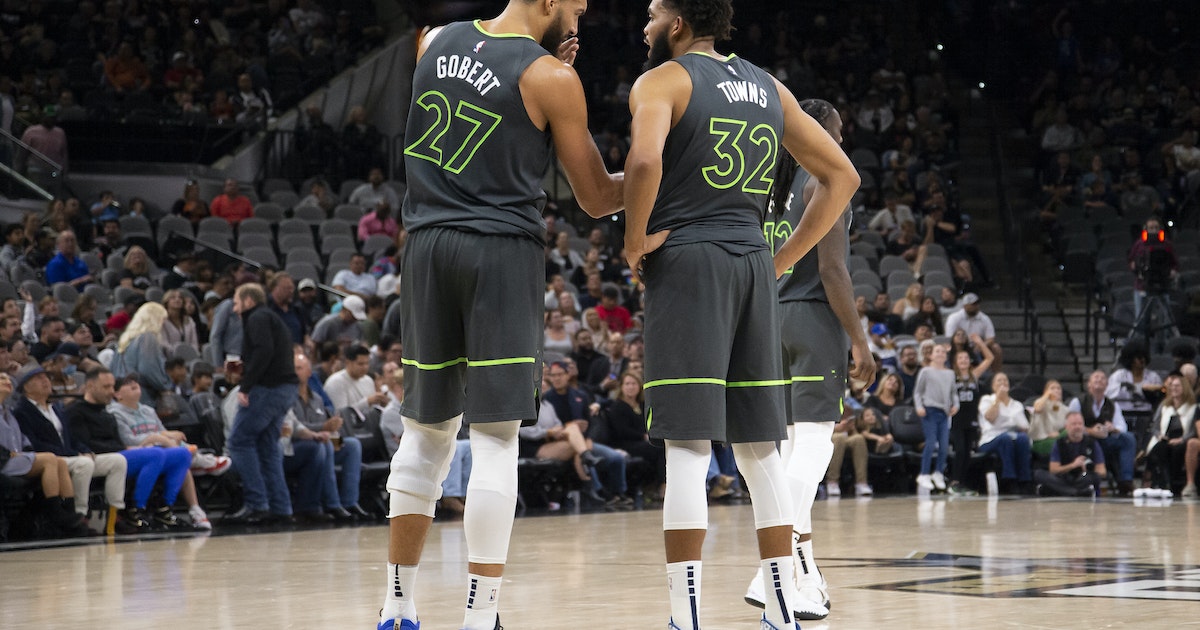 Suns center Deandre Ayton has a sprained ankle and will be out for the nationally televised game Tuesday night at Footprint Center.

I was at the Wolves game at Phoenix tonight, 31st straight sellout, amazing atmosphere for a November game on a Tuesday night.

Even when we cut it to 2, at no point did I think we had a chance. Ridiculous turnovers at the beginning and end of the game.

BleedGopher said:
I was at the Wolves game at Phoenix tonight, 31st straight sellout, amazing atmosphere for a November game on a Tuesday night.

Even when we cut it to 2, at no point did I think we had a chance. Ridiculous turnovers at the beginning and end of the game.

Its same old stupid TWolves, led by DLO, Kat, and Ant. Wolves might have had a lot of roster turnover, but we know who the main culprits are of the dumbest team in basketball (per Barkley)

Hero ball without outside shooting or getting all the "star calls" won't work.

Wonder how long before Finch gets that?

They should start bench players coming out of halftime to mix it up...That first 4-5 minutes in the 3rd quarter is about the worst thing to watch in all of sports.

Thanks for the ant clip above. This thread is better than any other wolves post game. Thanks posters!