All Things 2022 Gophers in NFL Thread

I didn’t see a thread for this year so thought I would kick it off with a bang.

GophersInIowa said:
I didn’t see a thread for this year so thought I would kick it off with a bang.

I hope he’s as good a football player as he’s at acting stupid.

gopherphil said:
I hope he’s as good a football player as he’s at acting stupid.
Click to expand...

GophersInIowa said:
I didn’t see a thread for this year so thought I would kick it off with a bang.

If the whole NFL thing doesn't work out. WWE might be a good fit for him.

gopherphil said:
I hope he’s as good a football player as he’s at acting stupid.
Click to expand...

That was the word from all the draftniks leading up to the 2022 draft. That rookie Kieft, a tight end from Minnesota, was just a misplaced, one-dimensional fullback. He could block and that was about it.

It sure seems like the draftniks were dead wrong. And Kieft seems to be having the last laugh. Granted, Kieft has yet to put on pads for the Bucs, who drafted him in the sixth round. But so far, Kieft has demonstrated he can catch the damn ball through rookie minicamp, OTAs, mandatory minicamp and the first week of training camp in underwear football conditions.

Kieft spoke with Joe after practice yesterday at One Buc Palace and basically said in a matter-of-fact tone that unless someone with the Bucs offers an opinion about his play or his abilities, he has no use for them. They can shove their smack where the sun doesn’t shine.

“I don’t care if someone else who has no idea who I am, that’s not on this team — if it’s some other coach or another player telling me [what] I have to do, I’ve got no time for that,” the pride of Sioux Center, Iowa said.
“When I was in college at Minnesota, I did what I was asked to do. And that’s what I did.”
Click to expand...

And he did it quite well. Kieft was not asked to be Travis Kelce at Minnesota. He was asked to be a bone-crushing blocker from his Gophers coach, former Bucs wide receivers coach P.J. Fleck. Because of this, the draftniks deemed Kieft a one-trick pony.

From what Joe has seen Kieft is much more than that. Oh sure, he’s physical. But Kieft has caught several passes working with both the first-team Bucs offense and the second-team offense. He doesn’t look overmatched or clumsy.

Joe is not saying Kieft is the next Tony Gonzalez; slow down. But he’s a capable pass-catcher.

Of course, being able to catch passes from Tom Brady, well, that guy makes everyone look better. Kieft admits like anyone else, when he first realized he would be playing with Brady it was an OMG moment. That, Kieft said, has quickly subsided.

“It was pretty surreal the first day he was in for minicamp,” Kieft said. “Now, it’s like it doesn’t matter. You have to do your job. Your assignment, your technique and all of that. That’s all I’m worried about.”
Click to expand...

Kieft told Joe, as other Bucs have, that Brady is just like anyone else in the locker room. The difference is Brady has very high standards and he demands those standards are met.

“Oh, 100 percent,” Kieft said. “Great leader. Coming into this, you realize why he’s been so successful. It’s every day with him [how everyone must improve]. It’s incredible to see.
“It’s a blessing to be part of this team.”
Click to expand... 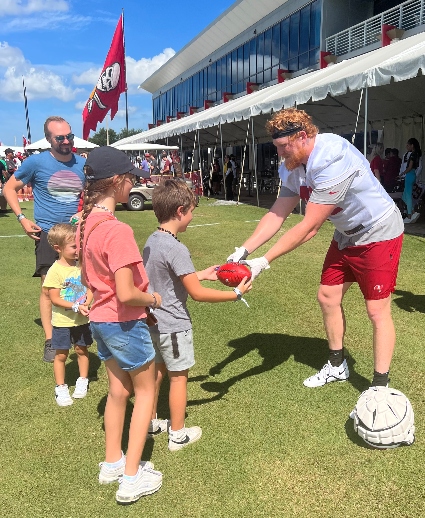 We all know the story by now. Ko Kieft isn’t supposed to be able to catch the ball. He’s not supposed to be a weapon in the passing game. That was the word from all the draftniks leading up to […]
www.joebucsfan.com

Tyler Johnson with the Bucs' play of the day in training camp.

Santoso pushed a 60 yard FG attempt just a shade right. Had the distance.

Nice write up on Kieft. Sounds like he's making his mark in Tampa.

Awesome to see the Ravens promoting Bateman as their #1 WR. Hopefully he comes through with a huge year.

MNVCGUY said:
Awesome to see the Ravens promoting Bateman as their #1 WR. Hopefully he comes through with a huge year.
Click to expand...

I'm FB friends with Vinny Cerrato who's now working in Baltimore sports radio and he's put up many Bateman related posts going back to OTAs. He's very high on him!

From the Tampa Bay Times...behind a paywall article about TB being loaded at receivers and cuts need to be made. 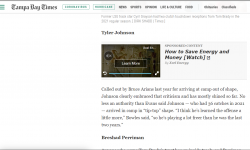 Appears to be a lock to return. Good going to Mr. Johnson.

BilldGopher said:
From the Tampa Bay Times...behind a paywall article about TB being loaded at receivers and cuts need to be made.

View attachment 19606
Appears to be a lock to return. Good going to Mr. Johnson.

Good to hear he is putting in the work. He is getting to that make or break point in his NFL career so if he wants to stick around in the league he has to do the little things that it will take to keep his career going.

Behind a paywall but you get a few free articles... 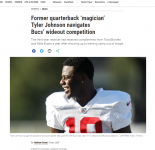 How long until he starts?

He's a baller through and through. Can't wait to see him on Sundays.