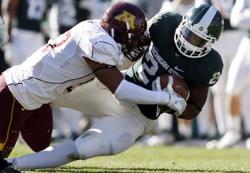 The Gophers look for their third victory in a row at home over Michigan State.

Five Things You Need To Know

1. Minnesota welcomes Michigan State to TCF?Bank Stadium this weekend. This will be the Spartans’ second trip to Minnesota’s new on-campus facility, as the Gophers prevailed 42-34 against Michigan State on Oct. 31, 2009. The Spartans have won two straight games against Minnesota, but both of those games were played in East Lansing, Mich. Minnesota trails 17-27 in the all-time series, but has won six of the last 10 meetings between the two schools and  four of the last five meetings in Minneapolis. The Gophers, who are 11-12 all-time against Michigan State at home, have lost only once to the Spartans in Minneapolis since 1998 and that was a 44-38 setback on Oct. 18, 2003.

3. The Gophers are 6-5 on the season, which means they will play in a bowl game for the first time since 2009. Minnesota had six wins combined in 2010 and 2011. Minnesota will compete in its 15th bowl game at the end of the season. The specific bowl and opponent will be announced in the future. The Gophers are 5-9 all-time in bowl games, with their most recent being a 14-13 loss to Iowa State on Dec. 31 in the 2009 Insight Bowl. Minnesota’s last bowl win was a 20-16 victory against Alabama on Dec. 31 in the 2004 Music City Bowl.

4. Saturday’s game is the last game of the regular season for Minnesota. The Gophers won six combined games during the previous two seasons, but they won the last game of the season each time. Minnesota upset Iowa 27-24 to end 2010 and then defeated Illinois 27-7 to end 2011. A win on Saturday would mark the first time since 1999-2001 that the Gophers would end three straight regular seasons with a win (Minnesota also won season-ending game in 1998 against Iowa). The Gophers ended 1999 with a win at Iowa and then defeated the Hawkeyes at home in 2000. Minnesota finished the 2001 season with a home victory against Wisconsin. Saturday will mark the first time that Minnesota will end the regular season playing Michigan State.

5. On defense, the Maroon and Gold have allowed 261 points this year. With a strong defensive showing against Michigan State on Saturday and in the bowl game, the Gophers have a chance to keep their opponents from scoring a combined 300 points this year. The last time that happened was the 2004 season. That year, the Gophers allowed a combined 273 points in 12 games and beat Alabama 20-16 in the Gaylord Hotels Music City Bowl.