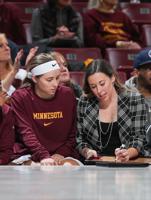 With the Gophers finishing the regular season with a 10-2 record and a co-Big Ten West title, there are many different situations and scenarios that Minnesota could end up in, depending a lot on what happens during Championship Week. While the Rose Bowl seems out of reach (or is it?), let’s take a look at […] READ MORE 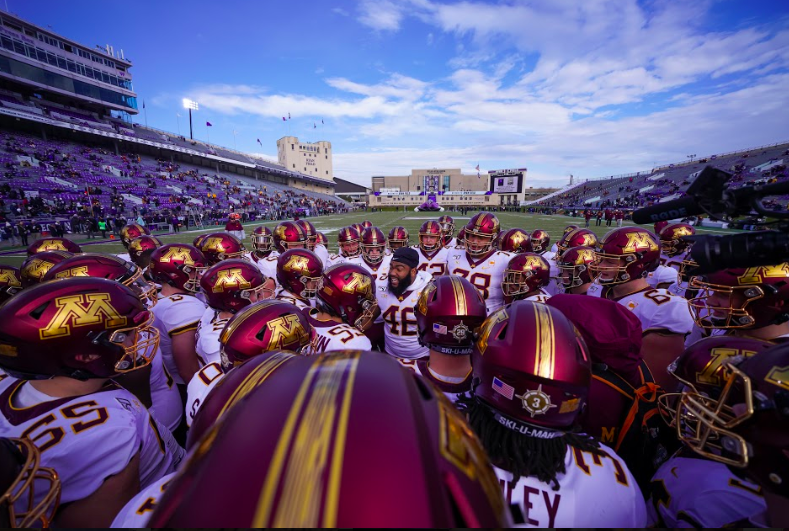 What a difference a season has made.    After a 7-6 finish last season, few predicted an improvement of three wins and the most regular-season wins since 1905 for P.J. Fleck and Co.    Even then, having the two losses be to Minnesota’s two biggest rivals in Iowa and Wisconsin stings more and makes it […] READ MORE 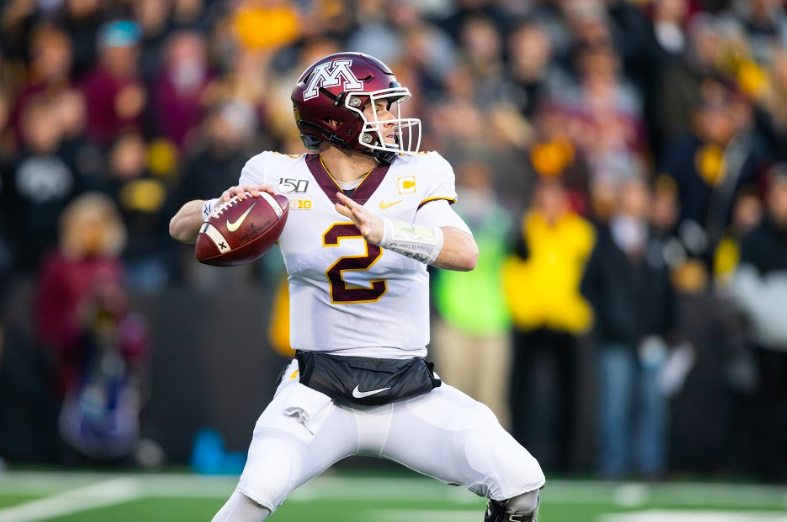 After the team’s first loss of the season last week vs. Iowa, the Gophers came out firing vs. Northwestern en route to a 38-22 win in Evanston. The defense forced a three-and-out on the first drive and within a couple of minutes, Tanner Morgan and Rashod Bateman were hooking up for the duo’s first touchdown […] READ MORE 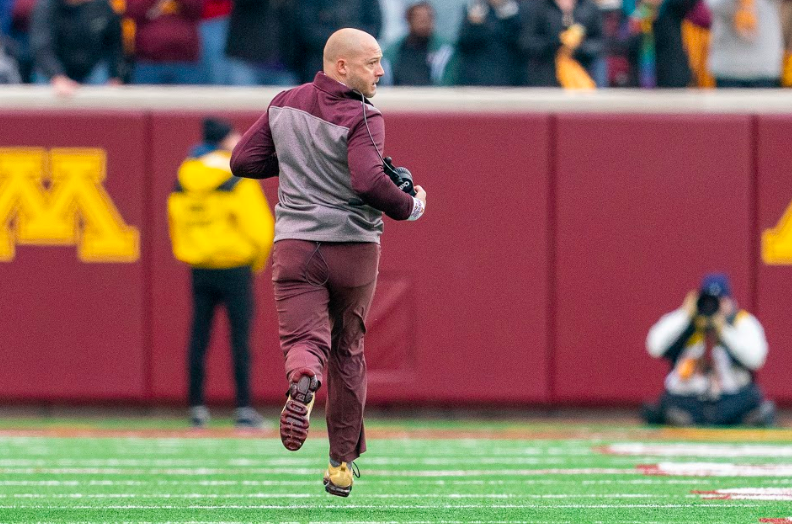 It was definitely not the start the Gophers wanted. Iowa ran 8 plays for 75 yards in 3:34 on the team’s opening scoring drive and never looked back. The Hawkeyes handed Minnesota it’s first loss of the season, with the Gophers streak of not winning at Kinnick Stadium extending back to 1999. A couple of […] READ MORE 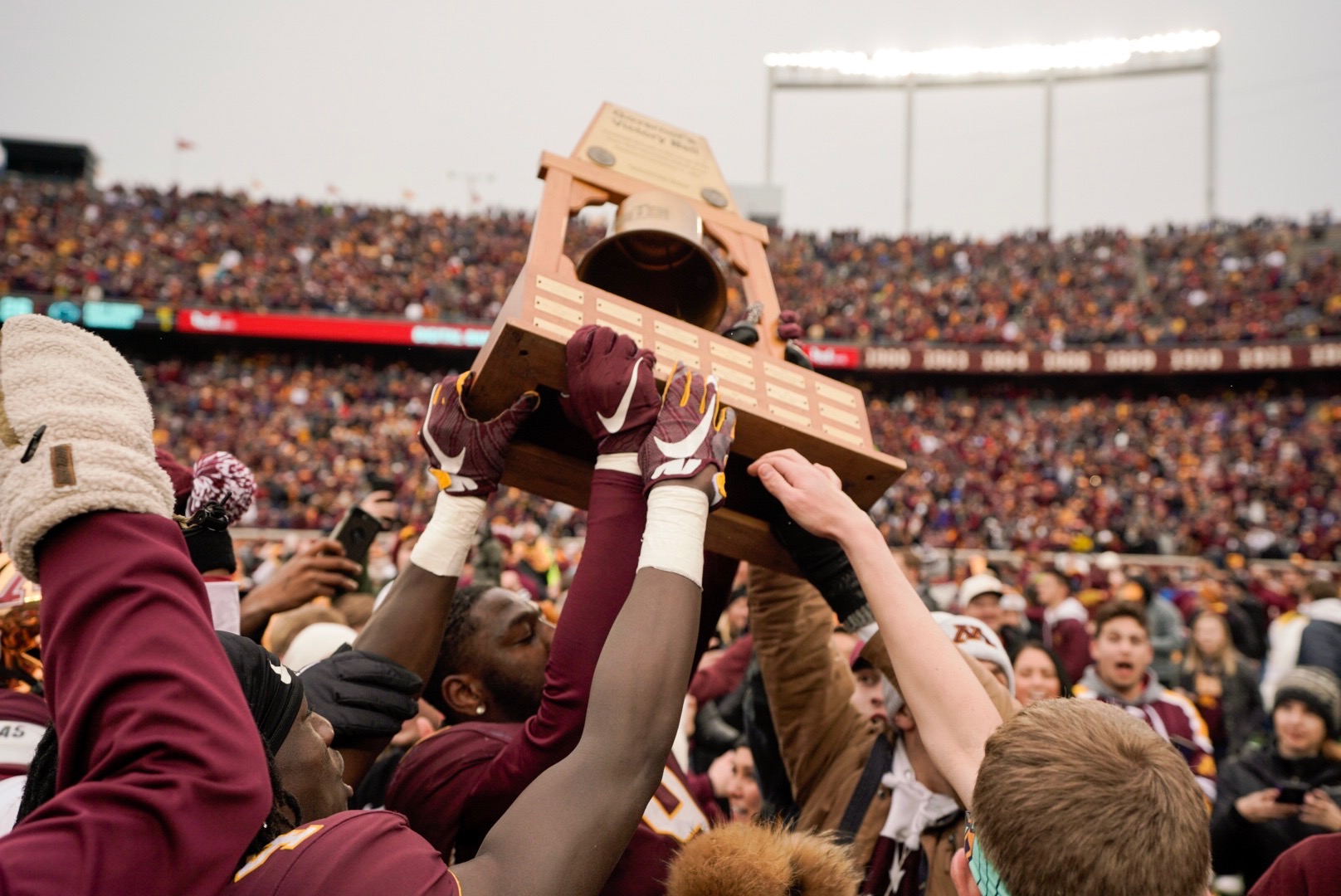 All they do is win.  The No. 13 ranked Minnesota Golden Gophers defeated No. 5 Penn State 31-26 on Saturday afternoon at TCF Bank Stadium. Behind Tanner Morgan’s arm and three interceptions by the defense, the win marks one of the best wins in decades for the program. The Gophers are now 9-0 and control […] READ MORE 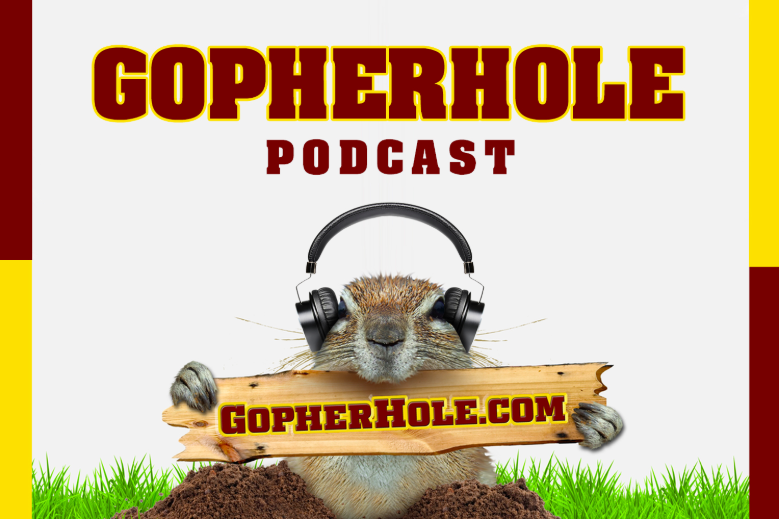 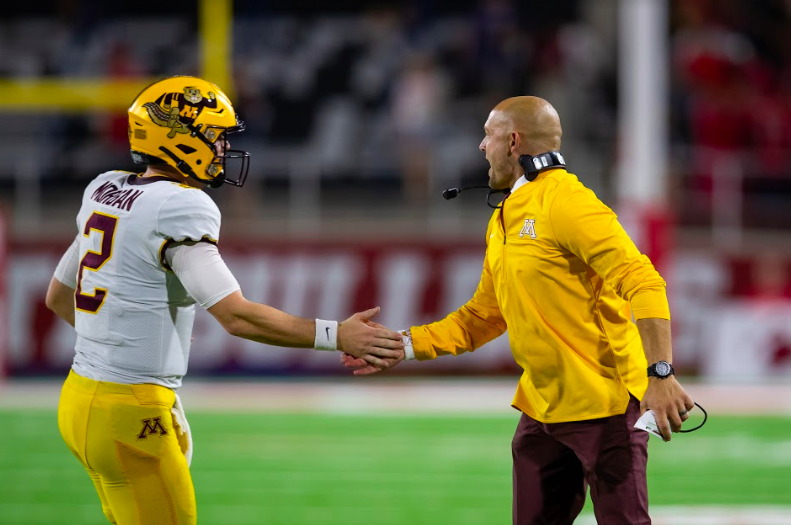 Penn State…come on down!  The Gophers avoided the infamous “trap game” narrative and took care of business on Oct. 26 with a 52-10 win over Maryland. The Gophers played an almost perfect first half, making few mistakes en route to a 28-3 halftime lead.  The win–along with a Nittany Lions win over Michigan State–sets up […] READ MORE 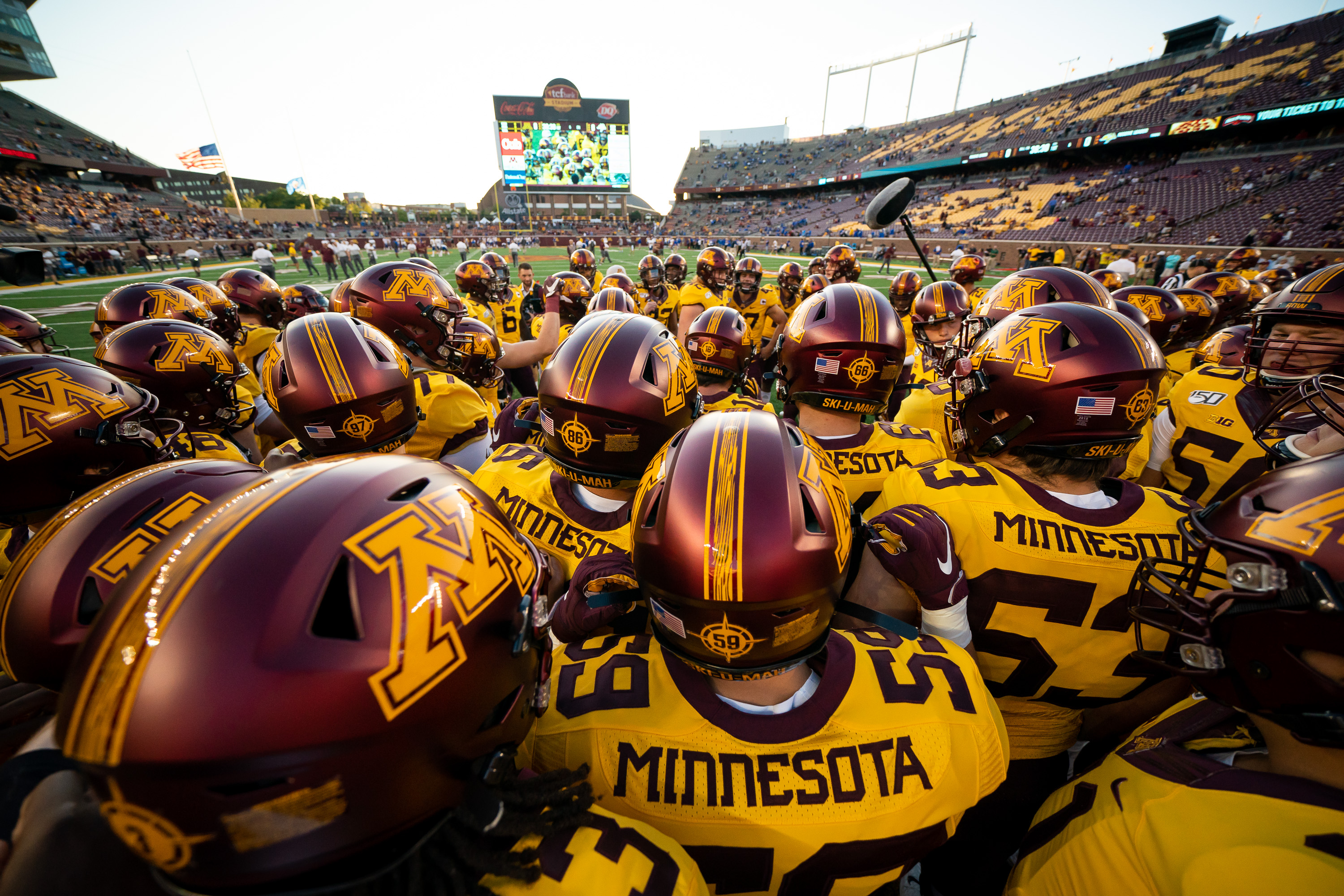 6-0.  For the first time in 16 years, the Gophers have won the first six games of the season with a 34-7 win over Nebraska. Dating back to last year, the Gophers have now won eight straight games, the longest streak since 1948-1949. In victory No. 6, the Gophers used the running game once again, […] READ MORE 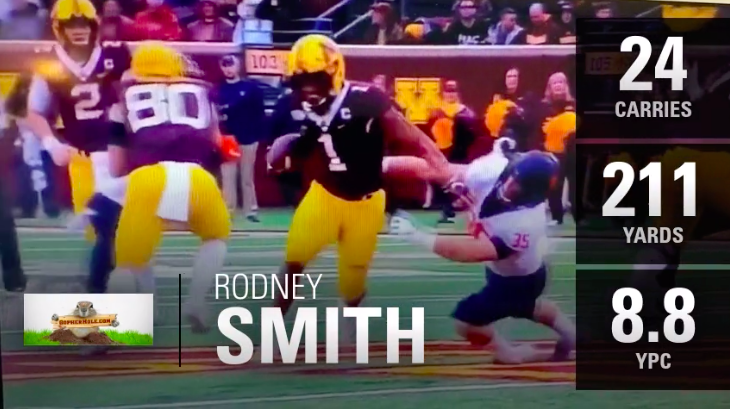 Led by the defense on Homecoming Saturday, the Gophers improved to 5-0 this afternoon in the team’s 40-17 win over Illinois. With the rain and mist coming down at the beginning of the game, Minnesota relied on Rodney Smith and the running game and never looked back. Smith and Brooks combined for 332 rushing yards, […] READ MORE 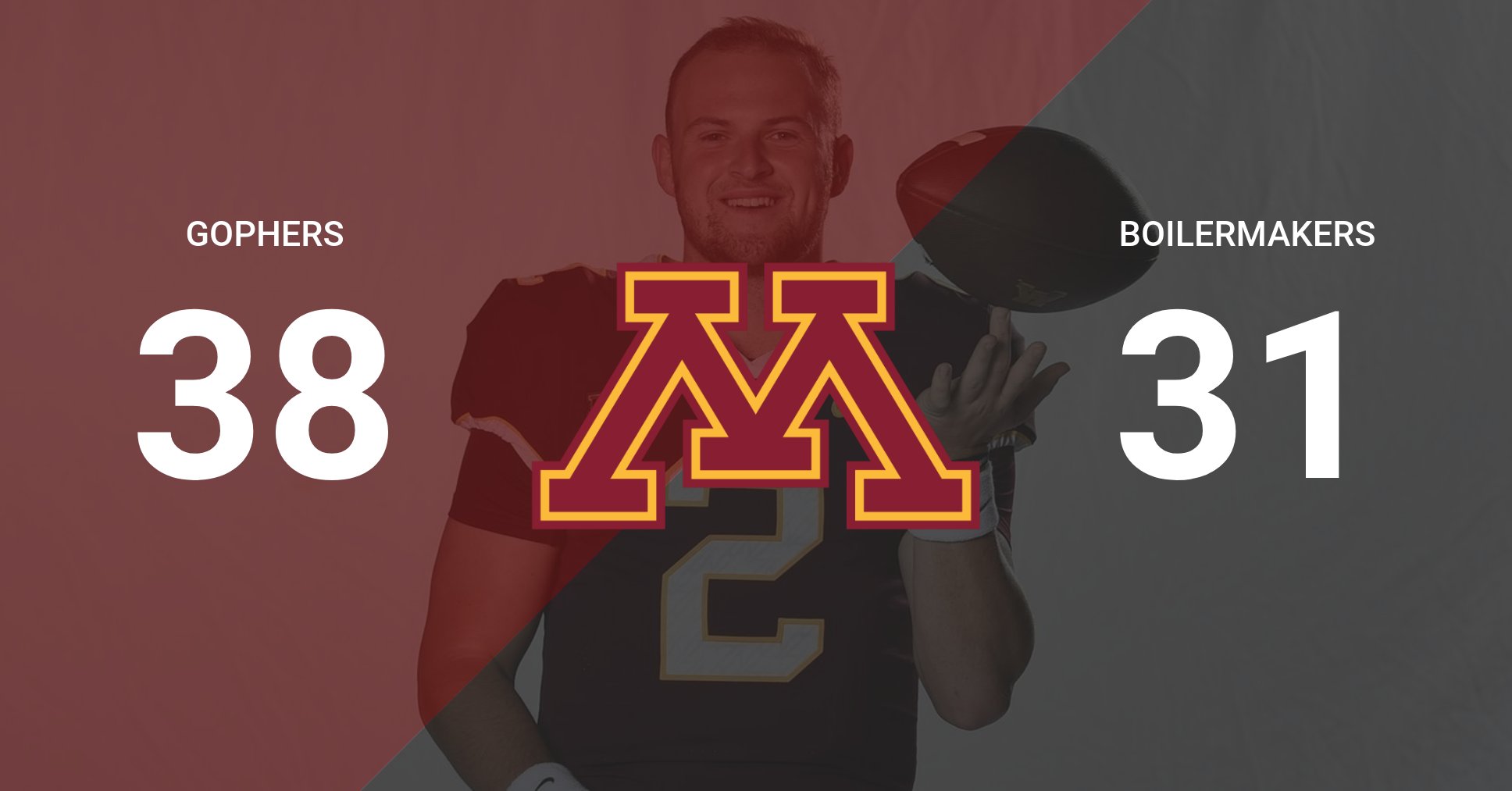 Another Saturday and another close Gophers victory! Led by Tanner Morgan’s performance through the air, the Gophers held on once again, advancing to 4-0 on the season ahead of Homecoming vs. Illinois next weekend. The fans will be out in full force at TCF Bank Stadium as the Gophers will look to continue their hot […] READ MORE