On Tuesday, WVLT reported that a Knoxville, Tennessee man held up a Little Caesars in Cedar Bluff with an AK-47 rifle after being told his pepperoni pizza order would take ten minutes.

"Officers responded to the restaurant just after 9 p.m. Friday where they were told that the suspect, identified as Charles Doty Jr., 53, became upset when he was told that his peperoni pizza would take ten minutes to make. According to the report, 'he got upset and demanded a free bread stick order and went outside the business to wait for the pizza,'" reported Camruinn Morgan-Ramsey. "When Doty Jr. returned, he had the rifle in hand and was pointing it at employees, demanding his pizza immediately, the report reads. Doty Jr. reportedly stopped an employee who was trying to leave the Little Caesars, asking 'where in the hell he thought he was going,' and a woman waiting in line ended up giving him her pizza in an attempt to get him to leave."

According to the report, police later tracked him down and arrested him. He is charged with aggravated assault and especially aggravated kidnapping.

I think they owe you breadsticks if they don’t have a hot and ready choice on demand.

saintpaulguy said:
I think they owe you breadsticks if they don’t have a hot and ready choice on demand.
Click to expand...

I mean, haven't we all wanted to do this at one point or another? This is clearly a man that is not prone to idle threats, and not to be trifled with!

saintpaulguy said:
I think they owe you breadsticks if they don’t have a hot and ready choice on demand.
Click to expand...

Hard to imagine pulling a gun over pizza. Raising Canes I could understand . . . 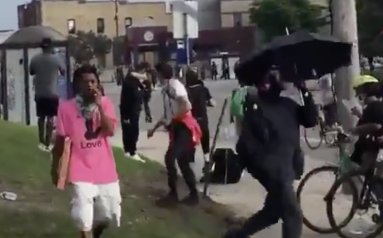 For sure this thread would look the same if it was a different guy with the AK.

We wouldn't be hearing about an epidemic of lawlessness or anything.

I for one think someone pointing an AK at me would be alot more serious and scary than a smash and grab theft.

golf said:
Hard to imagine pulling a gun over pizza. Raising Canes I could understand . . .
Click to expand...

And Little Caesers at that...

MNGopher23 said:
And Little Caesers at that...
Click to expand...

I picked up a pie from Dominos last night. They had 3 people working and they were making pies as fast as they could and the phone was ringing off the hook. The guy exasperatingly (but positively) told me "us three are all we have for tonight". I felt bad for them.

Anecdotally, I've seen so many customers really upset at wait times, closings, etc. over the past 2-4 months. People are generally really on edge right now. Haven't seen any guns pulled but have seen some people overly and unreasonably upset about not getting to eat at a restaurant. Our nearest Jimmy John's has resorted to closing everyday at 4:00, for example.