So, what's with the recent news that Minnesota's "impaired waters list" added 304 lakes and streams, pushing the total to nearly 3,000?

America celebrated in 1972 when President Richard Nixon signed the landmark Clean Water Act and trumpeted the law's grand objective of making waterways "fishable and swimmable." Nixon put regulatory teeth into the new law by creating the U.S. Environmental Protection Agency and appointing one of its best-ever directors, Bill Ruckelshaus.

In Minnesota, the new Pollution Control Agency (PCA) was writing regulations to clean things up, and the first Earth Day had attracted massive crowds at nationwide teach-ins. In St. Paul, bills with green in the title sailed through the Legislature. That was a half-century ago. The explanations reveal troubling tales of pressure politics by agriculture and mining, mostly. It's also about public complacency, regulatory timidity and institutional interest in studying more than correcting problems.

In the 1970s, two young attorneys, Chuck Dayton and John Herman, were the only public lobbyists pushing eco bills at the Capitol; their advocacy is rightly credited for many foundational laws, including Minnesota's Environmental Policy Act. Following an especially productive session, Dayton mused that passing bills into law is one thing, protecting them from being neutered is quite another, requiring vigilance. Since then, there has been a profusion of capable environmental-advocacy groups, and the state's PCA and Department of Natural Resources (DNR) have greatly expanded rosters of resource experts.

Yes, the Clean Water Act helped tackle egregious assaults like dumping untreated sewage and industrial waste directly into rivers, making our own Mississippi a stinking dead zone through the Twin Cities. Rivers no longer catch fire or turn red with slaughterhouse waste, and advanced sewage treatment systems are everywhere. But the Clean Water Act had a gaping carve-out. "Point sources" like pipes and waste canals were regulated, but "non-point sources" like farmlands were left to "voluntary" care — something that's never worked.

Despite all that vigilance, the "impaired waters" list keeps growing. And the stories of resource-protection efforts are littered with intrusions by moneyed "neuter masters" at all government levels that much too often frustrate what begin as broadly popular eco-initiatives. One example: In 2015, Gov. Mark Dayton won support for 50-foot natural buffers along all waterways to improve wildlife habitat and filter out harmful runoff. In two years, farm interests with their legislator allies whittled the program from game-changer down to attaboy.

So it's little wonder that most "impaired" waters are in farm country, and that the Gulf of Mexico's biological "dead zone," wrought by ag runoff, now covers 6,000 square miles, and is growing. Small towns in Minnesota and elsewhere are paying millions to upgrade water treatment systems to reduce nitrates, yet another pollutant from … guess where?

---------- In the 1970s, the PCA's brash new director, Grant Merritt, fought tirelessly to stop taconite wastes being dumped directly into Lake Superior at Silver Bay, and he prophetically warned about the effects of copper-nickel mining. That was too much for Iron Rangers who pushed Merritt out after just two years on the job.

---------- Then 3M tried to get PCA's Sandra Gardebring fired as she pressured the company to clean up its nasty chemical wastes in the east metro (these and other "forever chemicals" remain a major problem). Gardebring survived, but the PCA director in the next administration was from 3M.

And present-day controversies over copper mining and efforts to reduce sulfate discharges from taconite production, along with wilderness designations for the Boundary Waters Canoe Area, are largely responsible for Iron Rangers becoming red politically when historically they were deep blue. It's perhaps understandable that regulators are reticent to enforce eco rules, preferring the safer route of sampling and studying issues, identifying problems and solutions … and then hope the problems will self-correct.

The same timidity prevails as county and town boards routinely approve clearing trees and deep-rooted plants around lakes for farm fields and housing, paying little heed to DNR warnings that nearby lakes will surely become "impaired" when surrounding watersheds are more than 75% developed.

So the list of "impaired waters" likely will keep growing, on roads paved with good intentions.

I attribute it to terrible leadership

The top 10 cleanest lakes, out of the 180 lakes monitored by the Metropolitan Council, are listed in no particular order:
The 10 lakes in the metro area with the poorest water quality are listed in order, starting with the worst:
https://www.twincities.com/2019/05/...best-worst-lakes-across-the-twin-cities-area/ 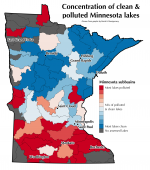 Yet another situation where Broke doesn't have the foggiest f'ng idea what he's posting about.

Let's see.... what is it that's different about the state of MN where it starts to turn from more polluted to less polluted.... what could it possibly be....? I know, I know, Broke's not an Engineer, just a complete moronic teachers union flunky, but maybe he can figure it out?....

Every community -- city, village, township -- is located in a watershed. Your community has a low point -- a stream, river, pond, lake, or other body of water into which all of the water in your community eventually flows.

The largest watershed in Minnesota and in the United States is the Mississippi River Watershed, which flows into the Gulf of Mexico. Water from thirty-one states (including most of Minnesota) and two Canadian provinces drains into it. The Rocky Mountains in the west and the Appalachian Mountains in the east are the rim of the bowl, the highest ground in the Mississippi watershed. 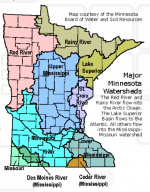 Some guy said:
It’s almost like farm runoff is worse for lakes than forest
Click to expand...

MonikerSchmoniker45 said:
More like the filth from the metro makes its way down via the waterways
Click to expand...

Interesting- I fish regularly on half of the cleanest lakes in the state.

MonikerSchmoniker45 said:
More like the filth from the metro makes its way down via the waterways
Click to expand...

You seem unaware of which direction the Minnesota River flows, and what path it takes.

saintpaulguy said:
You seem unaware of which direction the Minnesota River flows, and what path it takes.
Click to expand...