Oh boy...the FBI failed to read their own file on Steele indicating that his sources for the dossier were Russian intel agents & that it was likely Russian misinformation. Later when they knew it, they continued to use it anyhow to try to take down the President of the United States. There's no way to spin this one.

"One of the newly declassified footnotes highlights a glaring misstep early in the Russia case, when key officials failed to review the intelligence control file for Steele, a former MI6 agent who approached the FBI with unverified allegations about Trump after he was hired to do opposition research by the firm working for Hillary Clinton and the Democratic Party.

Checking such files is a basic procedure in a counterintelligence probe when an informant is involved, officials told Just the News.

The footnote states that an FBI intelligence analyst and a supervisory special agent working on the Crossfire Hurricane probe admitted they "did not recall reviewing information in Steele's Delta file documenting Steele's frequent contacts with representatives for multiple Russian oligarchs in 2015."

Specifically, that footnote added: "A [redacted] 2017 report relayed information from [redacted] outlining an inaccuracy in a limited subset of Steele's reporting about the activities of (former Trump lawyer) Michael Cohen. The [redacted] stated that it did not have high confidence in this subset of Steele's reporting and assessed that the referenced subset was part of a Russian disinformation campaign to denigrate U.S. foreign relations."

That same footnote reveals a separate report to the FBI, dated 2017, “contained information … that the public reporting about the details of Trump’s [REDACTED] activities in Moscow during a trip in 2013 were false, and that they were the product of RIS ‘infiltra[ing] a source into the network’ of a [REDACTED] who compiled a dossier of information on Trump’s activities.” RIS is an acronym for Russian intelligence services.

The new information provides the most explosive information to date that FBI officials had serious reason to doubt Steele's dossier when it first arrived and during the time it was used to support FISA surveillance warrants targeting the Trump campaign in late 2016 and 2017."

FBI failed to review Steele's ties to Russians, warned some of dossier was Moscow disinformation

"Despite the evidence showing Moscow’s spy network played a role in spreading deceptive and false information, the FBI none-the-less “aggressively advanced the probe anyway, ignoring internal oversight mechanisms and neglecting to flag the material credibility concerns for a secret court.” Moreover, the FBI officials involved in the probe against Trump continued to use the Russian disinformation to target Trump’s campaign and his administration after discovering it was based on patently false information and lies.

All the Adam Schiff talking points were lies. The FBI's Crossfire Hurricane, a coup attempt. The Mueller investigation knew & covered it all up. This could be the thread that unravels Fisagate.

I don't know why you're so excited. No doubt JTF will dig up some WaPo or NY Times editorial piece that will "debunk" everything you've laid out here. You know, "real" journalism

Ogee Oglethorpe said:
I don't know why you're so excited. No doubt JTF will dig up some WaPo or NY Times editorial piece that will "debunk" everything you've laid out here. You know, "real" journalism
Click to expand...

I sincerely hope he does.

The footnotes were declassified with the rest of the report months ago. More RW conspiracy theory.

Dean S said:
The footnotes were declassified with the rest of the report months ago. More RW conspiracy theory.
Click to expand...

You're a fountain of misinformation. These are newly unredacted.

Hmmm - this is interesting. More footnotes declassified. Hidden in the classified notes is the fact that the FBI knew that the Russian sub source for the dossier actually strongly favored Clinton.

The whole report, including footnotes, unredacted, has been available for months. Get out of your information pig pen and see the world.

Dean S said:
The whole report, including footnotes, unredacted, has been available for months. Get out of your information pig pen and see the world.
Click to expand...


I can't wait to see myself in print, once again.

Dean S said:
The whole report, including footnotes, unredacted, has been available for months. Get out of your information pig pen and see the world.
Click to expand...

Dean S said:
I can't wait to see myself in print, once again.
Click to expand...

Can you link us a copy of the fully unredacted IG report from December? Let's see what you're talking about.

I won't. I'll just ask you crazy question after crazy question, wasting your time. You have done that to me so often that it drives me insane. A little taste of your own medicine, without actually doing what you do to me.

Dean S said:
I won't. I'll just ask you crazy question after crazy question, wasting your time. You have done that to me so often that it drives me insane. A little taste of your own medicine, without actually doing what you do to me.
Click to expand...

Costa Rican Gopher said:
Can you link us a copy of the fully unredacted IG report from December? Let's see what you're talking about.
Click to expand...

You even know when it was published. Good for you. Now look it up.

By the way...the things that are coming out of the recent declassifications are devastating to the FBI, Mueller and the Obama administration. Everything you have been told by the media for the past three years is going to be proven to be BS. They were fed the information by the coup plotters and they gleefully ran with it. Now they are stuck with only hatred for Trump as they await the full revelation of this in the courts. The spying by Obama goes back to 2012 at least. The spying on the Trump campaign goes back to 2015. The Mueller team knew there was no collusion on day one. The FBI was a full participant in the disinformation campaign and set up of Trump, Flynn, Papadop and others.

I am regaining hope that justice will be served and many, not a few, from Obama's team will be indicted. It looks like they have the goods according to these declassed docs.

Christopher Steele's files were wiped. He admitted this in recent testimony. Hmmm- now why would they do that?

EXCLUSIVE: Dossier Author Testified His Emails Were ‘Wiped,’ He No Longer Has Documents Related To Primary Source

Christopher Steele told a British court that he no longer has documents and other information from his meetings with the main source for his Trump dossier. 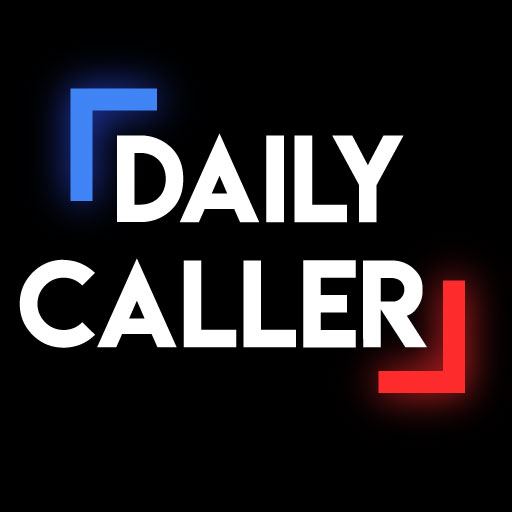 dailycaller.com
Christopher Steele told a British court last month that he no longer has documents and other information from his meetings with the main source for his Trump dossier, suggesting that the former British spy has no way of backing up his side in a dispute with the Justice Department’s inspector general (IG), according to a deposition transcript obtained by the Daily Caller News Foundation.
Steele also told the court that his communications regarding the dossier, including with Fusion GPS, were “wiped” in December 2016 and January 2017, the transcript shows.

The former MI6 officer made the disclosures during a March 17-18 deposition in a defamation case related to the dossier. The DCNF obtained a transcript of the deposition. 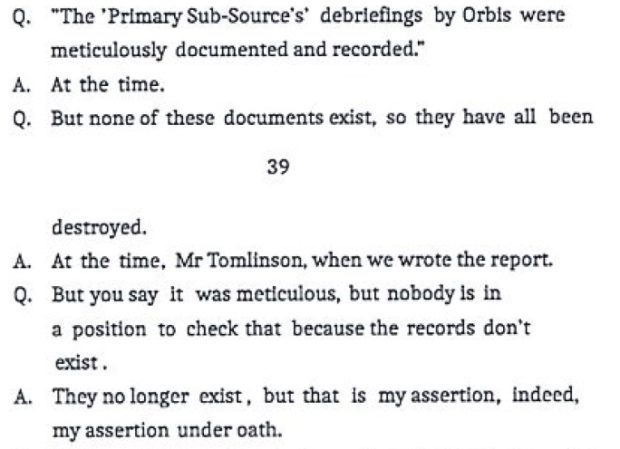 Passage from Christopher Steele’s deposition on March 18, 2020, in a lawsuit involving the dossier.
Steele has closely guarded the identity of his dossier source, including during the Alfa Bank deposition. But he said the source had done work for his firm for “several years,” and that his firm Orbis paid retainers to sources of between $3,000 and $5,000 a month.
The source allegedly used a network of contacts inside and outside of Russia to gather tips about Donald Trump, his associates, and Kremlin officials. Steele alleged that the Trump campaign took part in a “well-coordinated conspiracy of cooperation” with the Kremlin to influence the 2016 election. The special counsel’s report found no evidence of a conspiracy, and the IG report cast significant doubt on Steele’s allegations.
Footnotes from the IG report declassified this month showed that the FBI received evidence that Russian operatives may have fed disinformation to Steele.
One footnote said that the U.S. intelligence community gave the FBI a report in June 2017 that said two Russian intelligence officers knew as of July 2016 that Steele was investigating Trump.
Steele also appears to have made an inaccurate claim about the IG report in his haste to defend the dossier during his court deposition. He told Tomlinson, the lawyer for the Alfa Bank owners, that the IG has had to “significantly” amend sections of the IG report dealing with what the dossier source told the FBI.
Steele claimed in the deposition that the IG had retracted claims in the report about the primary dossier source.
“So you think that the U.S. Inspector General’s office has got it wrong and you are right; is that your position?” Tomlinson asked Steele.
He said that the IG report “has already been revised by the Department of Justice in terms of its interviewing of this primary sub-source.” He asserted that the revision “completely changed the nature of the interview that he gave to them in January 2017.”
It is not clear what Steele was referring to since the IG report has not had any significant revisions.
A spokesperson for the IG declined comment but pointed out a section of the report that discusses slight edits to sections regarding the dossier source’s comments to the FBI.
Steele’s attorney did not respond to a request for comment.
Content created by The Daily Caller News Foundation is available without charge to any eligible news publisher that can provide a large audience. For licensing opportunities of our original content, please contact [email protected].