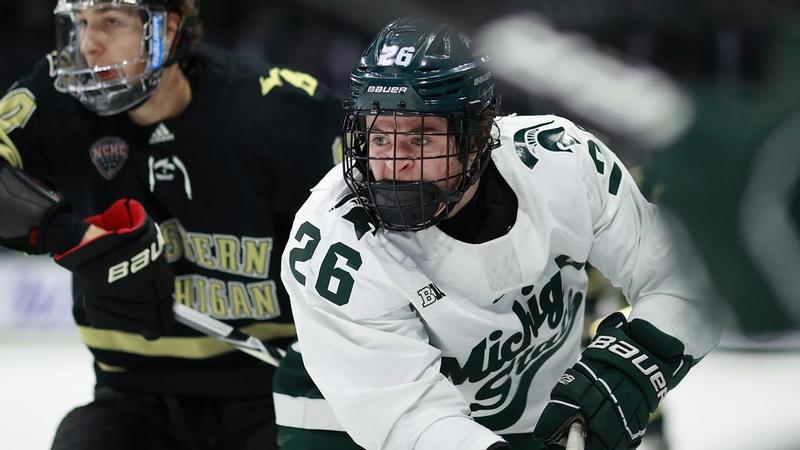 Consistency has been an issue for both teams and they'll be looking to change the win-lose and lose-win pattern this weekend as Big Ten play resumes for the first time since mid-December.

MSU is coming off a split in the Great Lakes Invitational showcase with a 3-1 loss to No. 3/3 Western Michigan and a 3-2 victory over No. 18 Michigan Tech. Minnesota had been idle since Dec. 4 but it played two exhibition games last Sunday and Monday. The Gophers defeated St. Thomas, 5-2, and the U.S. Under-18 team, 5-3.

Minnesota, the defending Big Ten playoff champion and picked to finish first in the regular season this year in the preseason coaches' poll, is arguably one of the most skilled teams in the nation with 15 NHL draft picks on the roster.

"They're a deep team, they play fast and the strength of their team is defense,'' MSU coach Danton Cole said. "(Jack) LaFontaine was the best goalie in the Big Ten last year and their defense corps is really, really good.

But the Gophers haven't been overwhelming this season. They've been very good in some games and not-so-good in others. Ever since sweeping Notre Dame at home, Oct. 29-30, Minnesota has split at Wisconsin, home against Ohio State and Penn State and on the road at North Dakota and Michigan.

Michigan State had its share of series splits. Since back-to-back sweeps over Ferris State, Nov. 11, 13, and Wisconsin, Nov. 19-20, the Spartans have split series at Penn State, Notre Dame and last week in the GLI.

But there's a long way to go in the 2021-22 season with 14 Big Ten games remaining for Michigan State and 16 overall games left for Minnesota – 14 conference and two non-conference.

The Spartans came close to tying Western Michigan at 2-2 in the final minutes, but an empty-net goal sealed it for the Broncos. MSU never trailed in its 3-2 win in overtime against Michigan Tech.

"I liked the battle in our guys. We found ourselves in some weird situations and we had to defend,'' Cole said. "We kept up the intensity and didn't back down. I thought both third periods were probably our better periods all weekend.''

And, of course, there were some things that Cole didn't like about his team's last two games.

"I thought we got back on our heels and got separated. That's when you're not good,'' he said. "That's when turnovers happen. And you play a lot of transition defense instead of transition offense.

"We have to get better at that. I thought going into the break we were starting to get good at it and were understanding when to go for it and when not to go for it. We made the game a little bit too hard on ourselves.

"But we responded to it extremely well. Our legs were good and we had a good push at the end of both games. It got us one win and we had three really good chances to tie the first game.''

Michigan State's biggest challenges against the Minnesota are handling the Gophers' speed, their transition game and highly skilled forwards, and trying to score on a strong defense, led by four standout defensemen and fifth-year senior goalie Jack LaFontaine.

"Minnesota is fast and has a lot of skilled guys. They're a good team every year,'' Spartan senior defenseman Cole Krygier said. "When we bring more physicality to them, I think it helps us a little more. They're strong with LaFontaine, they have good forwards and their defense can skate.''

In comparing, the offense/defense and power play/penalty kill comparisons, each team holds an edge in two.

Not surprisingly, Minnesota has the better stats in goals scored, averaging 3.39 goals-per-game, while the Spartans are at 2.40. The Gophers rank 15th in the nation and 4th in the Big Ten. MSU is 43rd overall and 6th in the conference.

Defensively, the Spartans hold an edge in goals against and penalty killing. MSU is allowing 2.50 goals-per-game, 18th in the nation and No. 3 in the Big Ten. The Gophers have a 2.72 GAA, 23rd, nationally and No. 5 in the conference.

MSU has skated off 83.6% of opponents' power plays, which is 22nd nationally and second in the Big Ten. Minnesota is at 82.4%, 31st in the nation and fourth in the conference.

"After the two years I've been playing them, I feel there's a little bit of a rivalry between Michigan State and Minnesota. There's definitely a bit of fire going into the games,'' junior center Josh Nodler said. "I know they're really a skilled team and they move the puck well. We'll have to make sure we play physical and stick to our game plan.

"They have pretty good defensemen who have good sticks and can create turnovers, so we have to make sure we manage the puck well, move it quick, protect it and get pucks to the net.''

Krygier said a big emphasis is playing with focus and energy for a full 60 minutes and avoiding stretches where the Spartans get back on their heels, allowing their opponent to control the puck and apply pressure in MSU's defensive zone.

"It's staying focused and in the game,'' he said. "We come out and have really good starts and then in the second period, we've had mental lapses. Guys start to get comfortable and out of rhythm. Playing a consistent 60 minutes is going to be huge for us in the second half. If we want to beat good teams, we have to be solid in the second periods.''

THE RIVALRY: Minnesota holds a 125-50-16 edge in a rivalry that started with a 2-0 Gophers victory on Feb. 19, 1926, in Lansing. The schools started playing regularly in January, 1950, with Minnesota winning the next 22 games through 1956. Last season, the Gophers, who finished second in the Big Ten and won the playoff title, went 5-0 against the Spartans. Over the last 12 meetings, the Spartans are 5-7 against the Gophers.

Must sweep. Didn't leave a lot of room for error with a lackluster first half. I'm optimistic as I think Bob's teams have often improved as the season goes on, though the olympics will throw a huge wrench in our second half.

Gophers1992 said:
Must sweep. Didn't leave a lot of room for error with a lackluster first half. I'm optimistic as I think Bob's teams have often improved as the season goes on, though the olympics will throw a huge wrench in our second half.
Click to expand...

Yeah the 1st half wasn’t ideal. But I think the little room for error is more so due to being about to lose 4 top end guys for a month.

Have to play really well these couple weekends before they leave and take no Ls.