REMEMBRANCE OF THINGS PAST

In five seasons, Jonathan Tsipis was 1-8 versus Minnesota. And despite Tsipis calling the January 2020 victory over the Gophers “huge” for his program, his lone Badger win proved to be more of a Gopher nadir than a Badger apogee. Tsipis’ program continued its backsliding and following last season’s 2-18 conference finish, the former George Washington head coach was dismissed.

Tsipis had replaced Bobbie Kelsey whom in five seasons on the shores of Lake Mendota was also 1-8 versus the Maroon and Gold. Kelsey won her first border battle and then suffered the O fer. She has found her niche as Commissioner of Academics and Athletics at Milwaukee Public Schools while Tsipis is, as far as I can tell, working with something called W7 Productions helping to promote Wisconsin girls’ basketball.

The Kelsey/Tsipis eras totaled a decade of battered Badger basketball. Before the “lost decade”, things were slightly better. Lisa Stone coached eight seasons before she was forced out. During her tenure, Stone was 7-7 versus Minnesota. However, the Badgers were only good enough to make one “one and done” NCAA appearance. 18 years with only one NCAA appearance is why new Badger head coach Marissa Moseley traveled back almost two decades searching for some Badger glory.

Madison.com’s Jim Polzin’s story about Marissa Moseley’s hiring had some interesting nuggets. Last Spring, current Badger athletic director Chris Mcintosh was the assistant athletic director in charge of the coaching search. He had settled in on some front runners and reluctantly agreed to do a zoom interview with Moseley after her Boston University team had lost the Patriot League final to Lehigh. He was impressed; Moseley was hired.

Moseley arrived in Madison looking for a link to Badger glory past. She found one. Up on her office wall went a photograph of one of Badger ball’s most glorious events. It wasn’t from the Tsipis era, or the Kelsey era or even the Stone era; it was from January 20, 2002, when Wisconsin’s head coach was Jane Albright. Pictured was “Cram the Kohl” day and the Kohl center was crammed by a sold out, rafter rocking crowd. Their opponent? Minnesota. If the date sounds familiar, it is. We’ve discussed the game before. It’s available on YouTube. It was a breakout game for the Whalen/McCarville crew. Badger fans were disappointed as the top ten Badgers were defeated by Minnesota 92-85. Wisconsin basketball hasn’t been the same since. A peculiar choice for the wall; but what else is there?

Minnesota and Wisconsin are, of course, intertwined. Moseley, we remember, spent two years in Minneapolis, 2007-09, as an assistant to Pam Borton. Although the Gophers made the NCAA tournament in each of her years, the appearances did little to assuage the memories of the 2006 “Exodus”. After two seasons, Geno Auriemma phoned, and Moseley was off to Storrs.

Four years ago, when Whalen moved into her office, I remember reading about her decorating it with memories from her Gopher and Lynx days. And I remember Whalen saying: that she told her players what Cheryl Reeve once told her: "Help us redecorate". In other words, we want your memories on the walls, not mine.

Seriously, both Minnesota and Wisconsin are desperately in need of redecorating with fresh memories from the 2020’s-memories that actually occurred in the memories of the current players.

BACK TO THE FUTURE

As Marissa Moseley was arriving. The Badgers most impactful player Imani Lewis (15.5 points and 8.8 rebounds per game) was departing. Welcome to Madison Ms. Moseley; your best player is now suiting up for Duke.

Unsurprisingly, the Badgers have continued their downward spiral. Wisconsin is 3-11 (0-4 in conference). They’ve lost to in state rivals: Milwaukee 67-79 and UW Green Bay 53-63. Fortunately, they did not play Marquette this season or it would’ve been a clean sweep for the Wisconsin mid-majors.

The Badger roster is mostly familiar and unintimidating. Left to their own devices, Julie Pospisilova and Sydney Hilliard can become annoyances; but a little defense can shunt them aside. If the Badgers are bad with Popisilova and Hilliard, imagine what they would be like if Hilliard was out with a lower leg injury. Well, she was and the Illini defeated the punch less Badgers 68-47. Marissa Moseley started five guards and the quicker Illini simply ran past the Badgers. I’ve watched several Wisconsin games and I’ve not a clue as to what Moseley is trying to do beyond getting through this season and welcoming a new one.

Anyway, here are the notable Badgers:

Junior guard Julie Pospisilova is the Badgers leading scorer and leading three-point shooter. However, Pospisilova’s three point shooting is suspect. She’s hitting at a .308 clip (24-78). Last season Posisilova was 30-82 (.366) so maybe she’ll pick up the pace.

Junior guard Sydney Hilliard, the second leading scorer, is a shooting guard who doesn’t shoot from three-I mean ever. Hilliard is 0-0 from beyond the arc. Last season she shot 19 threes and made 6. Hilliard’s specialty is driving the lane. She gets to the line. Unfortunately, she’s not much of a free throw shooter hitting a .628%. As with many Badgers the bad cancels the good. And right now Hillard is canceled by a lower left leg injury.

Graduate transfer guard Katie Nelson was a notable addition to the starting lineup. Nelson, who started every game in her four-year BU career, followed Moseley to Madison. Nelson’s mission is to take some of the ball handling responsibility off Hilliard’s plate. However, her 5.5 points and 3.8 rebounds per game leave a gap with Imanni Lewis’ numbers.

Sophomore guard Brooke Schramck has recently picked up her scoring and got the start against Illinois.

Sophomore guard Halle Douglas has started three games including the last one against Illinois.

The third leading scorer for the Badgers is freshman guard, Krystyna Ellew. She’ll loft some threes and is deadly from the line, 21-22.

whats the word on Hilliard? will she be back wed?

MNGirlsHoops said:
whats the word on Hilliard? will she be back wed?
Click to expand...

I haven't seen anything; but she was wearing a boot on her left leg. I doubt she'll play Wednesday which leaves Wisconsin with 9 players.

They said she was hurt in practice the day before their game and was wearing a boot at the game so I'd be surprised if she played, but thats just a guess on my part.

whalenfan said:
Moseley said in her presser today that Hilliard was likely to play
Click to expand...

And then she added TBA

The coach is back; but we will have an interim play by play announcer

Ignatius L Hoops said:
The coach is back; but we will have an interim play by play announcer

Justin Gaard in COVID protocols according to his twitter page.

The paint has been wide open

If this is the team that had shown up against Maryland, we probably would have lost by 40 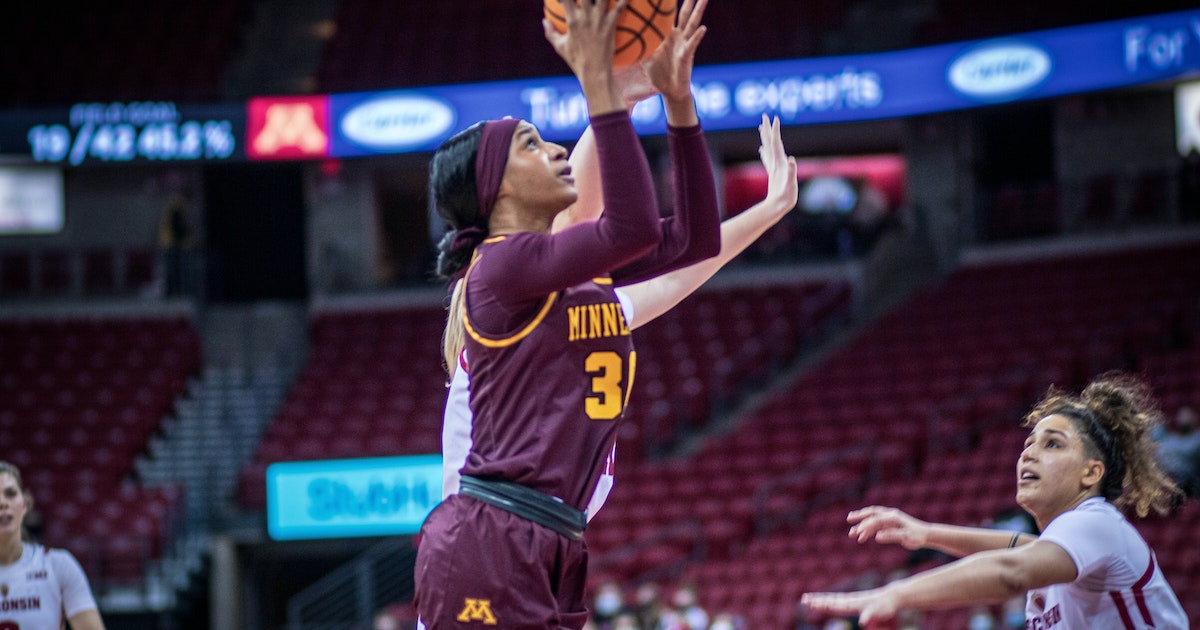 Under coach Lindsay Whalen, who was back after missing two games recovering from an appendectomy, the Gophers are now 6-1 against the Badgers. They are 4-0 in Madison.

The game marked the return of Whalen and point guard Jasmine Powell. Whalen missed two games after an emergency appendectomy last week. It took a toll. Exhausted after the game, Whalen declined to talk postgame, but did issue a game reaction through a release.

"I'm proud of our effort in the second half, especially when they cut it to single digits,'' she said. "That's what it takes to get a road win in the Big Ten.''

Not as an entertaining of a game like Maryland for sure, down right ugly at times but the Gophers did what they needed to do to beat a conference foe on the road. I do like seeing the Gophers going to the low post more often the last couple of games, even getting Helgren involved. Now with the shooters they have on their team I wouldn’t make it their bread and butter but it does give opposing defense something to think about. Sissoko 2 RB’s and assists away from a triple double. I like the way Micheaux hustles for rebounds and put back!