CHANGING ON THE FLY

Last Spring, Michigan’s Kim Barnes Arico had things rolling in Ann Arbor. The Wolverines (9-1), earned their third consecutive trip to the NCAAs, advancing to the Sweet 16. Along the way, Michigan defeated FGCU 87-66 and Tennessee 70-55 before bowing to Baylor 75-78 in OT.

It was a payoff for a taxing, covid dominated year. In the middle of the conference season, Michigan went almost three weeks without playing a game and, like most teams, the lineup took the occasional, random hit. Nevertheless, the Maize and Blue finished 9-4 in the B1G and proved up to post season competition.

With both a return to normality on the horizon and the return of Michigan’s first All American, Naz Hillmon, Kim Barnes Arico decided to mess with the special sauce. Out went the old coaching staff and in came a new one. She said it was something she learned from former Michigan men’s head coach, John Beilein.

“I knew it was time,” Barnes Arico said. “It was time for people to take new steps, to work in different programs, to get head coaching positions.”

They were replaced by Val Nainima, Carrie Moore and Harry Rafferty who are in early stages of their coaching careers. Barnes Arico believes they’ve injected new life into the Wolverines.

“The energy, the enthusiasm, the knowledge that they are bringing to practice every day has been absolutely incredible,” Barnes Arico said at Big Ten basketball media days.

Then, in the season opener against Horizon League champ, IUPUI, the basketball gods proved indifferent to the "energy and enthusiasm" emanating from Crisler Arena. A minute into the game the Wolverines starting point guard, Amy Dilk, went up for a rebound and came down with her left foot catching the side of Hillmon’s shoe. Dilk’s left knee took an ugly twist as she fell to the floor. After the leg was immobilized, she was helped off the court. Dilk has not returned to the lineup; even though the injury was later described as day to day.

Leigha Brown, a second team all B1G selection last season, came off the bench replacing Dilk. Brown pumped in 18 points augmenting Naz Hillmon’s 30; but IUPUI managed to send the contest to overtime tied at 58. Michigan overcame a five-minute scoring drought spanning the end of regulation and the start of OT to win 67-62.

In the next game versus St. Francis, Brown moved into the starting lineup. Then, two minutes later, Brown limped off the court and into the locker room favoring her left leg. She did not return. Brown sat out the next two games before returning to play in the win over Oregon State. She started against Louisville; but otherwise came off the bench.

When the Wolverines traveled to Central Michigan for their fourth outing, Dilk, Brown and Hillmon (non-covid illness) were unavailable. However, other players seized the opportunity to bring home a win. 6’3” senior Emily Kiser, one of two Wolverine to start every game, led Michigan with 16. She also had 8 rebounds and three assists. Another senior who has started every game is 5’8” guard Danielle Rauch. Rauch had 13 points against the Chippewas. And, the highly recruited freshman guard Laila Phelia, came off the bench for 12 points and 6 rebounds.

The one blemish on the Wolverines record is a loss at Louisville. It was a rather unsightly outing with Michigan getting shoved around the KFC YUM! Center. The Wolverine’s starting lineup was Hillmon, Kiser, Rauch, Brown and Maddie Nolan. But the Wolverines couldn’t get out of their own way committing 24 turnovers and going 2-15 from three. It was a 48-70 Cardinal romp.

Michigan has played twice since Louisville and both have been comfortable if not awe inspiring wins. The Wolveines ran past Akron and outlasted Wisconsin. The starting lineup, still without Dilk, appears to be stabilizing. More important, Michigan is a physical team with inside power that keeps playing toward the hoop. The Gopher posts will get a workout.

6’2” senior forward Naz Hillmon is the anchor and needs little introduction. Last season’s Big Ten Player of the Year is averaging 20.2 points and 8.6 rebounds per game.

Joining Hillmon in the starting lineup are:

6’1” Sr Leigha Brown is a terrific wing player averaging 12.4 points and 2 rebounds in 22.5 minutes of play. She has not been at full strength. Last season, Brown averaged 33.6 minutes and 18.2 points per game. However, she had an excellent outing against Wisconsin racking up 13 points, 6 rebounds and 5 assists in 29 minutes. I doubt the Gophers are going to get a break on Sunday.

Last season the 6’3” Emiley Kiser backed up Naz Hillmon and never started. This season, Kiser’s rebounding and defensive play has her starting alongside and taking some of the pressure off Hillmon. Kiser is averaging 30.2 minutes per game with 10.9 points and 8.0 rebounds.

6’0” freshman guard Laila Phelia got her first start of the season against Akron and her second against Wisconsin. She’s made a quick move up the depth chart and added some speed to mix.

“(Phelia’s) having an unbelievable freshman season,” Barnes Arico said after the Akron game. “I think she just gives us something that we don’t have. Her explosiveness to the basket, her ability to get in the lane, her ability to finish at the rim, and plus her defensive ability.”

Danielle Rauch a 5’8” senior guard has taken over Dilk’s point guard duties. She’s averaging 32.3 minutes per game with 8.1 points and 3.3 rebounds. Rauch is also 15-30 from three.

Maddie Nolan: a 5’11” junior guard is an adequate defensive player who also is the Wolverines prime three-point threat (19-45).

“Maddie’s an exceptional shooter,” Michigan coach Kim Barnes Arico said after the UMass Lowell game. “And we’ve kind of, me personally, have been on her a little bit all week because I thought she got hesitant in our IUPUI game after she missed a couple of shots. And we really need her to be aggressive and look to shoot the ball and score the basketball.

I also must note the 6’4” Izabel Varejao who is only averaging 4.3 minutes per game; but they are memorable, physical minutes. She scored 7 points against the Badgers.

The Wolverines are poised to keep their NCAA streak alive even as the coaching staff and players learn each other’s names.

Both scheduled meetings were canceled by Covid.

really interesting that we haven't heard much more about Dilk.. I've looked a couple time and nothing even asked some friends of mine on twitter who are Michigan fans, and they have just heard it's still just a day to day injury.. 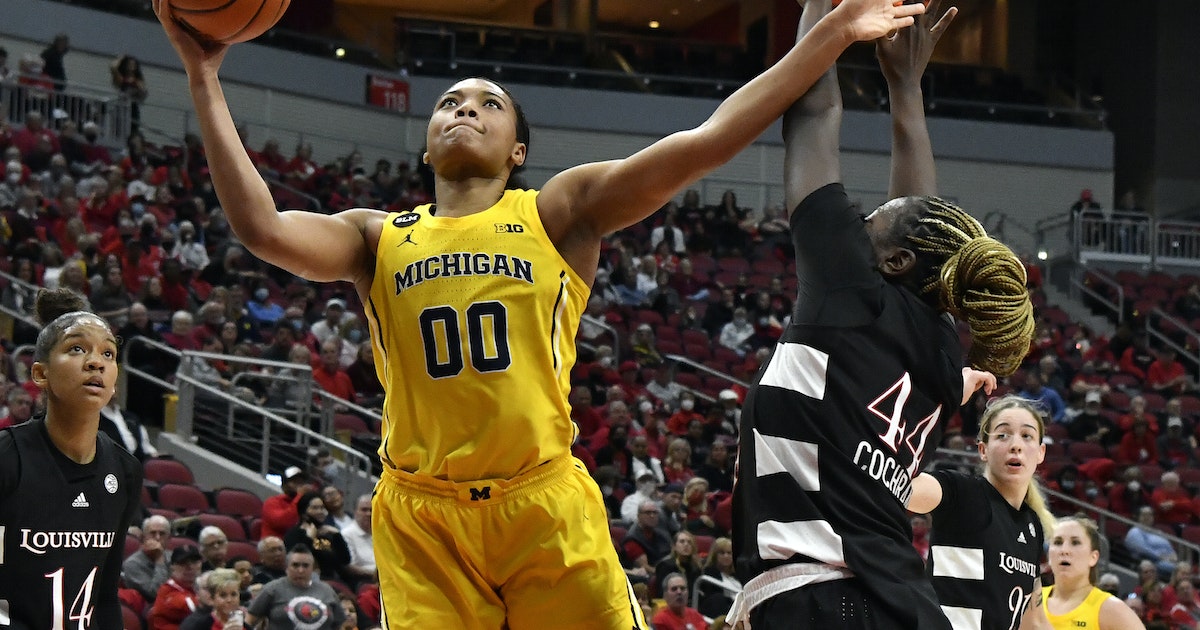 The Wolverines are 9-1, including a 93-81 victory at Wisconsin on Thursday. It was easily the most points Michigan has allowed this season.

Jasmine Powell, who injured her right ankle........ returned to practice this week and is probable for Sunday's game.
Click to expand...

Another head scratching start, 7 TO’s in one half quarter? Our guards are horrible this year. What has happene?

Katogopher said:
Another head scratching start, 7 TO’s in one half quarter? Our guards are horrible this year. What has happene?
Click to expand...

Luckily Michigan is turning it over more

They are in this one now in 2nd quarter. Look much better with Powell playing.

Now that was a cool shot from Powell. A dribble back high arching three to end the half.

Michigans guards are not good. Gophers did a good job keeping the ball outta the paint on defense. Even though Naz is having a solid game they are doing a good job on her.

Deja with 4 fouls is going to hurt

What a difference between the Gopher men's bb team and the women's team this weekend. Women with over 20 turnovers; men with 4. Women with more turnovers on screens and charging than the men had altogether. Sissoko with more fouls and turnovers than points. This team won't be able to win many games when that happens. Scalia scored 8 points late in the game, but that masks a non-productive outing for her also. Michigan a tad overrated in the polls. Leah Brown underrated. I agree with the thought that this team probably won't finish .500 in conference play this year.

The defense looked much improved for spurts today. It gave me optimism that we can beat Wisconsin and Illinois again this year. I liked the 'get my points' by Scalia and Powell at the end of the game. Says a lot about the team and coaching.

Agree, it’s so frustrating that when this team can go on a big run or stop another team’s run you cannot trust the big 3 (Scalia, Powell, Sissoko) to make a play. They are more apt to turn it over and make bad decisions than to make a play. After 3 years this should be improving but it hasn’t. A lot of TO’s are unforced and that is just unacceptabl.

What a pathetic performance. Defensively, I thought they played well for 3 quarters and then they fell apart in the 4th. Offensively they were a disjointed mess. As tripledouble indicated, way too many turnovers. And who teaches them about screens? Same thing over and over. No discipline and not enough ball movement. Mindless dribbling by Smith, and the usual turnovers by Sissoko. This was a game they could have won, as they have the athletes and the shooters. But not the basketball smarts. Looks to be a long season. I want Lindsey to win in the worst way, but this is not what I had in mind.

Yes, we revert to an off the ball stand around offense way too often.

I don't know if the glass is half full or half empty. I see flashes of really good play and then disarray. I worry that some players are not learning from their successes and mistakes. I would like to see more improvement. The primary goal for any team is to be a much better team by the end of the season. I am hoping for big improvement.

Ignatius L Hoops said:
Yes, we revert to an off the ball stand around offense way too often.
Click to expand...

This standing around on offense is contributing to the inconsistent individual offensive play, I'm anticipating the coaches need to make some adjustments there. It looks like whoever makes some early baskets they ride them out while the others watch. That's why some individuals games you will see a 15-20pt game and other games 5pts.. Running to many set plays makes us an easy team to scout and defend.
There is just to much pressure on the PG in this offense to do it all. I thought Kenisha Bell a few years ago was also doing to much at PG in year 1 .