GopherJake said:
Anecdotally. I’m talking about the felony level arrests. But I don’t have any backing data, admittedly. So I will change “the fact is” to “it is my belief.”
Click to expand...

And the fact is that what Walz and Carter said was false.

Spoofin said:
And the fact is that what Walz and Carter said was false.
Click to expand...

Don’t care. Neither should you. On the list of beefs about those riots, this point doesn’t rate.

GopherJake said:
Don’t care. Neither should you. On the list of beefs about those riots, this point doesn’t rate.
Click to expand...

Again, I brought it up in response to a specific post on here.

Anti-Defamation League (ADL) - Who Are Antifa?

The anti-fascist protest movement known as Antifa is a loose collection of groups, networks and individuals. It began in the 1960s in Europe, and had reached the US by the end of the 1970s. The movement’s ideology is rooted in the belief that the Nazi party would never have been able to come to power in Germany if people had more aggressively fought them in the streets in the 1920s and 30s.

Most antifa adherents today come from the anarchist movement or from the far left, though since the 2016 presidential election, people with other political backgrounds have also joined their ranks. Some antifa adherents have expanded their definition of fascist/fascism to include not just white supremacists and other extremists, but also many conservatives and supporters of former President Trump. Antifa supporters sometimes use a logo with a double flag, usually in black and red.

The label “antifa” is often misapplied to include all counter-protesters. Violence perpetrated by anarchists or other unrelated actors is often misattributed to antifa supporters, which makes it especially critical that the public, reporters and law enforcement understand how antifa and the militant element of the movement fit within the larger counter-protest efforts. Doing so allows law enforcement to focus their resources on the small minority of actors who engage in violence without curtailing the civil rights of individuals who want their voices to be heard.

Today, antifa adherents focus on countering right wing extremists both online and on the ground. Antifa’s presence at protests is intended to intimidate and deter racists, but the use of violent measures by some militant antifa adherents against their adversaries can create a vicious, self-defeating cycle of attacks, counterattacks and blame. Antifa violence is problematic, in part because acts of violence serve to normalize violence more broadly, and can spark a dangerous cycle of retaliation with white supremacists and other right-wing extremists. Violence can also undermine and even delegitimize efforts of peaceful antifascist protesters.

Because there is no unifying body for antifa, it is impossible to know how many adherents are currently active. Different localities have different antifa populations, but antifa adherents are also sometimes willing to travel hundreds of miles to oppose a white supremacist event.

Given that the antifa movement is leaderless and so decentralized, it is extremely difficult to pinpoint any governing plan. Broadly speaking, antifa adherents tend to protest far-right events and their presence at these events is intended to intimidate and deter racists. There is evidence of violent clashing between antifa adherents who come out to counter-protest right-wing extremist events and right-wing extremists themselves.

However, some actors who claim an affiliation with antifa have also targeted law enforcement – and by extension police precincts –because some antifa adherents perceive law enforcement as providing cover for far-right movements. Businesses have also been targeted with vandalism, which in some cases may be an expression of some adherents’ anti-capitalist views. In addition, antifa adherents will sometimes focus on symbolic targets, by, for example, vandalizing an ICE office while protesting the mistreatment of children in ICE detention facilities.

Militant antifa adherents often use black bloc tactics, with participants wearing all black clothing and operating as a unified force; people with riot shields stay at the front while behind them, others move “like water.” Antifa social media channels often prohibit filming or streaming at events, presumably to protect the identity of participants, particularly of those engaging in criminal activity. While some more militant antifa adherents fight with their fists, others have thrown projectiles or launched sling shots. Antifa adherents have also used noxious gases, and at various times they have pushed through police barricades and attempted to exploit any perceived weakness in law enforcement presence.

Away from rallies, they also engage in tactics that involve exposing their adversaries’ identities, addresses, jobs and other private information. This can lead to their targets being harassed or losing their jobs, among other consequences. Members of the alt right and other right-wing extremists have responded with their own doxing-related campaigns, and by perpetuating hateful and violent narratives using fake “antifa” social media accounts.

Persistent disinformation campaigns have dramatically affected the public perception of antifa. In the summer of 2020, disinformation was widely shared on social media which alleged that antifa was trying to use Black Lives Matter protests as cover to act violently, that they were planning violent attacks on white suburbs, and that they were working with Muslim groups to impose Shariah law (in three respective disinformation campaigns). There was also a fake antifa manual that was widely circulated, conspiracies connecting George Soros to BLM protests and antifa, and disinformation that antifa hosted a 4th of July “flag burning event.”

This tendency was amplified in the wake of the January 6th Capitol insurrection, as almost immediately false claims surfaced that antifa was the first to storm the Capitol – not pro-Trump extremists. These allegations were spread even by mainstream right-wing media personalities who falsely claimed that there were reports of busloads of antifa infiltrating the ranks of the pro-Trump crowd and that it was antifa that was the first to break the police barrier.

In July 2021, it was revealed that disinformation was put forth regarding claims that anti-fascists or BLM started wildfires in Oregon, sparking a wide variety of rumors that “leftists” were starting wildfires. A family was allegedly attacked while camping in Washington by those who were influenced by these rumors and thought their camper may be an “antifa transport vehicle.” There is no evidence to support any of these allegations, and all these false claims do is deflect blame for the insurrection and build antifa into a threat that is not reflected in reality.

GopherJake said:
The fact is, the most significant arrests were of people from outside the metro and out of state.
Click to expand...

This factual false statement proves once again why you are Jakewad the Idiot.

This is the kind of hard-hitting news the nation is looking for on a "news" leader such as CNN. Neighbor disputes. Kudos to some Twitter guy called Chris Evans for staying on top of this.

Have you ever thought about taking a few days off from social media, howie? Even just a couple? Might help you sleep a little bit easier

Do it back to them. Play "Bigot" every time they move.

Then watch how fast the police step in. "Oh they're Black??? We'll send the SWAT team! I bet their pants are down their ass, aren't they!!?"

I'm sure there are fine people on both sides.

Ogee Oglethorpe said:
This is the kind of hard-hitting news the nation is looking for on a "news" leader such as CNN. Neighbor disputes. Kudos to some Twitter guy called Chris Evans for staying on top of this.

Have you ever thought about taking a few days off from social media, howie? Even just a couple? Might help you sleep a little bit easier

No better place to get your confirmation bias fix. That way, everything makes sense.

Jacob Chansley, who wore a horned helmet and a fur pelt as he stormed onto the Senate floor during the Capitol riot, had earlier pleaded guilty to a single felony count.

I think we can all agree that it would be a great thing if one of those horns gets broken off inside his rectum, while in the big house.

MplsGopher said:
I think we can all agree that it would be a great thing if one of those horns gets broken off inside his rectum, while in the big house. 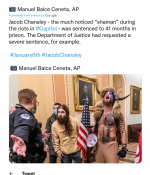 41 months for being letting him into the capitol, wearing a costume, walking around the capitol, and taking photos with security.

That dude must be badass to get 41 months.

This why all you nut jobs who want Rittenhouse put away still have hope. Our judicial system is nuts and woke.

This guy should have gone to some cities and burned stuff down and thrown stuff at officers, he'd then be totally free.

If the Nazis can get sued for this much, how much are the Trumpsters who are pushing all of this anti-democracy fraud and chaos and destruction onto our populace worth?

On another direction, should BLM also be held responsible for damages and deaths that occurred under their organization?

Note that I am not a fan of this form of “justice”.

I see his mouth is ready for the pen. Good luck. Should of got an extra 7 for the attire.

Do you vouch for Quancy and Quancy’s brother? I mean it is possible, but a Google search doesn’t return a single hit about this story. Man, you must spend a lot of time on Twitter to dig these things up.

Spoofin said:
Do you vouch for Quancy and Quancy’s brother? I mean it is possible, but a Google search doesn’t return a single hit about this story. Man, you must spend a lot of time on Twitter to dig these things up.
Click to expand...

I do believe the word we are all searching for here is "Gullible".